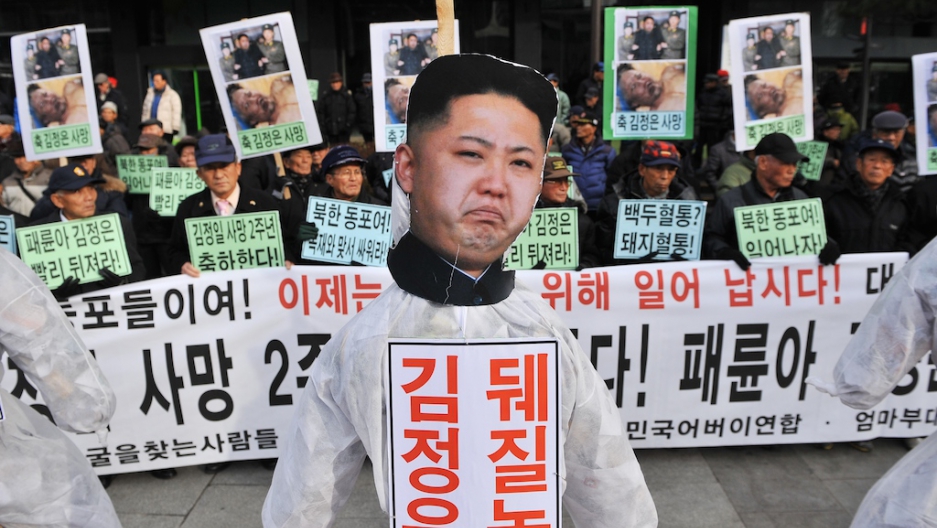 South Korean conservative activists prepare to set alight an effigy of North Korean leader Kim Jong-Un during a protest against his alleged human-rights abuses. Many South Koreans remain indifferent to the plight of their brethren in the North.
Credit: Woohae Cho
Share

INCHEON, South Korea — Standing in front of a cluttered, rowdy classroom of about a hundred adolescents, North Korean defector Kim Su-ryeon, 25, kicks off her presentation with a pop quiz.

“How many defectors have escaped to South Korea?” she asks the chattering group.

Others chime in. “Eleven!” “One hundred!”

A ballpark figure is elusive, leading Kim to surprise her audience with the answer. “There are 26,000 North Koreans living here!” exclaims the winsome law student. She is one of them: Once groomed for a life of prestige as a choir soprano honoring the Dear Leader, in 2007 she fled Chongjin city, and flew to South Korea after languishing in China and Mongolia for a year.

Kim moves to other topics. Did you know that this is a country where people have little freedom, where getting a bowl of rice a day can be a struggle, and where infractions against the regime can mean life in a prison camp, she asks?

Illustrating her points, she plays a propaganda cartoon. A team of North Korean chipmunk commandoes rescue a distressed family and gun down their kidnapper, who resembles a Japanese soldier. “This is what North Korean children watch,” she says, soon wrapping up one of numerous presentations put on in South Korean schools by the North Korea Strategy Center (NKSC), a Seoul-based advocacy group.

To anyone who’s paying attention, it’s not news that vast numbers of refugees have fled economic hardship and political persecution in the garrison kingdom. But here in Incheon, a port city not far from the Koreas’ disputed western sea border, the intensity of the human rights problem doesn’t quite register for a population numbed by its neighbor’s antics.

It is something of a tragedy for two countries that share a common language and customs, and where older generations on both sides consider themselves part of a single nation unluckily divided by great-power geopolitics. Yet when it comes to the suffering of their northern brethren, many South Koreans tend toward indifference, seeing their neighbor as a distant threat and potential burden — not a human rights travesty.

Ask Kim’s students what they think of North Korean refugees, and the answer is a mixture of apathy and revulsion. “I used to think North Koreans were ugly and talked funny,” admitted Choi Myeong-jae, 14, a student in the American equivalent to eighth grade, speaking of the North Korean accent.

“But now I met a real North Korean and I see they’re people just like us,” he told GlobalPost. Even school principal Lee Seok-bong called the defector’s classroom discussion a form of “security education,” pointing out the relevance in Incheon’s history as a strategic port once attacked by North Korean forces.

Official surveys paint a similar picture of uncertainty about the North. In August, the government reported that about half of high school and middle school students, and 71 percent of elementary school students, desired an eventual national unification.

So why the distance and apathy? National security priorities and the political goal of unification don’t leave much room for a discourse to emerge on human rights, explains Sokeel Park, research director at Liberty in North Korea (LiNK), a US-based campaigning group with an office in Seoul.

After the 1950-1953 Korean War, South Korea’s military dictators treated the North as a grave and existential threat, arresting political dissidents and accusing them of harboring regime sympathies.

Today, remnants of this mindset linger despite the democratic transition of the late 1980s, Park explained. In a few coastal areas, signs continue to adorn the walls of buses, reminding patriotic citizens to keep an eye out for spies who could infiltrate via the shore. The political climate is raucous and bitterly divided. The right-wing commentariat frequently tries to discredit the opposition by branding them pro-North Korean pinkoes.

In late 2013, the conservative government asked the Constitutional Court to disband the fringe, far-left Unified Progressive Party for pursuing North Korean-style socialism, and later sentenced an affiliated lawmaker Lee Seok-ki to 12 years in prison for conspiring to start an armed revolt against the government.

In short, “There’s a legacy that continues, a legacy of self-censorship, uneasiness, and of North Korea as a politically charged issue,” Park said. “We have to remember that the national division was birthed from a horrific war, and that this shaped the narrative of North Korea as an enemy and threat,” he said.

Park argued preparing for reunification diverts attention from the North Koreans’ plight, stirring up fears of enormous reconstruction costs. It’s a prospect that makes the North unattractive to the nation’s youth, who unlike previous generations no longer have direct family connections there, and worry more about the intense pressure to succeed in an aging society where household debt is soaring, the job market is tight, and elite degrees are highly valued.

But, he added, “If North Korea will open in our lifetime, it makes sense to understand it now. We need to approach it in a human way, depoliticize it, and show it’s not all gloom and doom. It’s a changing society.”

Kim, the young North Korean law student, concluded her presentation on a similar note, asking her South Korean audience for a rethink. “The North Korean people are not the same as our government,” she says. “We are human too. Please don’t be frightened of us.”