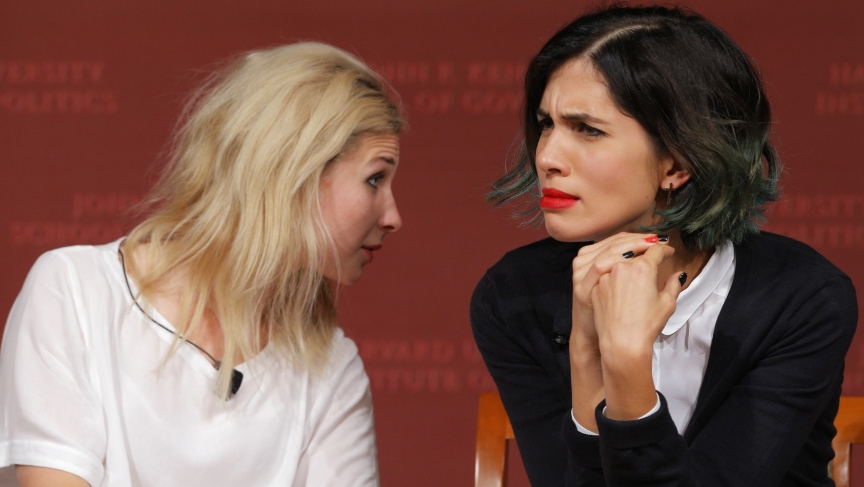 Maria Alyokhina (L) and Nadezhda Tolokonnikova, members of the punk collective Pussy Riot, listen to a question from the audience during a forum at Harvard's Kennedy School of Government, a few days before they made an appearance in Ann Arbor, MI.
Credit:

The email popped up from one of the on-air hosts at the public radio station I manage: "Can we say ‘Pussy Riot’ in an event announcement on the air?"

My first thought wasn't "oh, of course," but "when are they coming and where?"

Some of my more religious friends are horribly offended by the Russian art collective and their supposedly blasphemous guerilla performance in a church. But I am utterly fascinated by Pussy Riot.

I don’t know any Russian, but I love the anger.

I came of age as a college radio kid listening to the angry punk music of the 70s and 80s. The sound is pretty much the same. But there's a key difference. The punk I listened to growing up was the anger of bored suburban kids who were angry because they were bored. The women of Pussy Riot are angry for some damn good reasons.

Remember these young women were whipped by Cossacks at Sochi. They’ve been jailed. And they've been doused with chemicals by people opposed to what they have to say. They originally formed to protest Russia’s discriminatory policies against women, but they also now rail against the authoritarian leadership in Russia and Vladimir Putin in particular.

I also love that it is female anger.

Despite the hard won equality of women in the US, females are still socialized to be nice. A woman’s angry outbursts are often chalked up to hormones or dismissed as hysterics. Men can be rightfully angry and respected for taking a strong stand, but for women, it's really best to stay away from the anger thing. But of course women, like men, get angry and it is nice to hear a public expression of truly warranted anger from a group of women.

Because I'm angry too. And oddly even angry about some of the same things they are. I'm angry that the work my dad, an international law scholar, did creating a framework for the peaceful break up of the Soviet Union is being undone. I'm angry that what's going on in Pussy Riot’s country might well draw the US into yet another war. I'm angry that my ancestors were persecuted until they left Russian-controlled land and that that hatred is being stirred up once again. So I get it, I feel it, and I've never set foot there.

But, anger isn't always a bad thing. There are a lot of things happening in this world to be angry about. And if you are going to be angry, music and art is a great place to put that anger and share that anger.

And whether you admire or abhor what Pussy Riot has done and what they stand for, it is worth taking a listen, hearing what they have to say, and feeling their anger.

Yes, we promoted the Pussy Riot appearance in Ann Arbor on the air. And yes, I was there along with the more than 1,700 people who were able to get in.