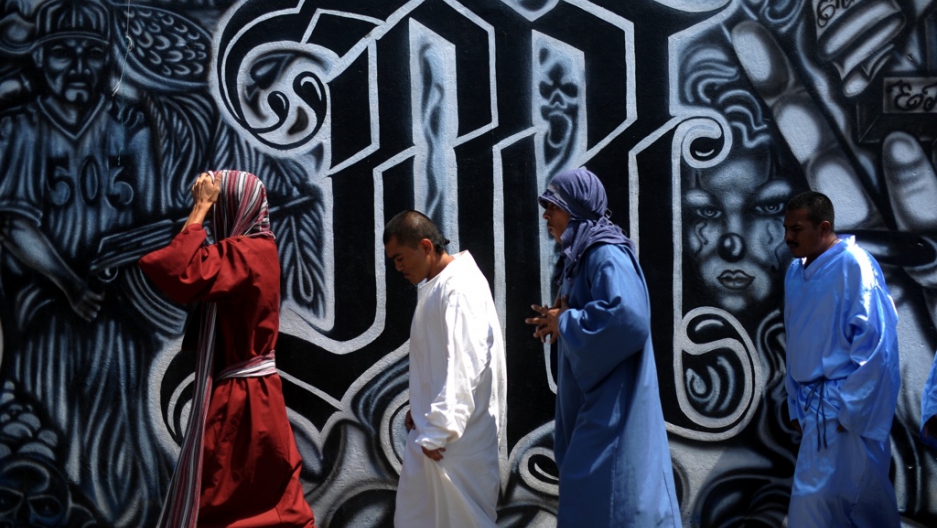 SAN SALVADOR, El Salvador — Spanish priest Antonio Rodriguez talks to the 18th Street gang’s most violent and highest-ranking members as though they are some of his oldest, closest friends.

He teases them, messes with their nicknames, praises their wives, complains to them about his health. When they call, he drops his native accent for a harder Salvadoran one, and leaves his clerical decorum behind, peppering his speech with curses like “puta.”

"How are you, payasito loco” — "crazy little clown" — he greets Douglas Geovany Velasquez, a gangster serving 35 years for aggravated homicide. In calls secretly recorded by Salvadoran authorities, Rodriguez promises that he will try to have Velasquez transferred to a lower-security prison on a “strategic day” when “there are marches.”

Velasquez was moved on April 30, a day before El Salvador’s labor day.

Officials recorded the calls as part of an investigation that found Rodriguez to have sought favors for gang members and smuggled contraband into prisons. In one conversation, the priest informs a gangster that the attorney general has recordings of him ordering killings. Gangsters also ask “Padre Toño,” as Rodriguez is known throughout El Salvador, to bring them cell phones and chips, using what seems to be code: Chips are called “children” and phones, “babies.”

This month, after weeks of protesting his innocence, Rodriguez finally confessed to smuggling phones into a prison, and received two years’ probation in lieu of jail time. He was allowed to leave for Spain, where supporters and family members greeted him as a victim of political persecution.

But the conversations make clear that Rodriguez had converted, over his decade and a half here, from a promoter of rehabilitation programs for gangsters to an ally and collaborator of the gangs. And there is little question that the priest knew what he was doing was wrong. “Speak freely,” he told Velasquez in one conversation. “This phone isn’t pinched.”

Rodriguez, a native of Daimiel, Spain, arrived in San Salvador in 2000 to work at a parish in Mejicanos, a sprawling neighborhood of pupusa stands, tire repair shops, and crumbling brick buildings on the edge of a volcano. Mejicanos’s streets have long been home to both the Mara Salvatrucha (MS-13) and 18th Street gangs.

More from GlobalPost: After US sex abuse scandals, an accused priest rises again in Paraguay

In 2010, the 18th Street gang — named after its birthplace in Los Angeles, California — launched one of the cruelest attacks in its history just a block from Rodriguez’s church. Gangsters torched a public bus, and 17 passengers burned to death.

The bus killings became a rallying cry, and then-President Mauricio Funes vowed to crack down. El Salvador criminalized gang membership, and unleashed police and military forces to repress and root out gangsters in neighborhoods like Mejicanos. Amid the furor, the soft-spoken young priest — at the time largely unknown — went on television and read a statement signed by both gangs. He asked the government to listen to and speak with the “muchachos,” or boys.

The statement got Rodriguez booted from at least one government commission for seeming to side with criminals. But he also gained notice as a voice of the gangs, or “maras,” as they’re called here, and his outreach programs began to draw attention from non-governmental organizations and media. In an Al Jazeera documentary, Rodriguez introduces his friend Giovani Morales, a tattooed MS-13 member struggling to leave gang life behind. Morales, who came to work with Rodriguez, was later gunned down in front of the priest’s offices.

In March 2012, the rival maras announced an unprecedented nationwide truce. The agreement had been mediated in the prisons by outside negotiators, with the government strategically denying any role. Though criticized for being opaque and for empowering the gangs, the truce slashed homicides in half for more than a year before starting to come apart. Early this year, Rodriguez offered to act as mediator in a new and more transparent series of negotiations.

More from GlobalPost: This mass grave does not bode well for El Salvador’s gang ‘truce’

Investigators secretly recorded Rodriguez between December 2013 and May of this year, months in which killings rose to 12 daily as one faction of 18th Street, the Revolucionarios, entered into open warfare with its other half, the Sureños, as well as against its longtime rival, MS-13.

In the recordings, some of which were leaked this month by the online news site El Faro, Rodriguez repeatedly speaks with three jailed leaders of the Sureños, including Carlos Mojica Lechuga, or El Viejo Lin, 18th Street’s longtime leader. The Spanish priest is heard gossiping with Lin about politics and filling him in on news about the truce. Lin wants to know whether the newly appointed security minister is behind it. “I’ll see him Monday,” Rodriguez responds. One Sureño gangster asks Rodriguez to speak with a leader of the Revolucionarios, 18th Street’s other wing, about lowering tensions. Rodriguez sounds surprised that the gang has managed to coexist with its longtime enemy, MS-13.

“The hottest zone is with the [Revolucionarios],” the gang member tells Rodriguez. “The others [MS-13] don’t even come around.”

Catholic and Protestant churches are among the few institutions respected in El Salvador’s gang neighborhoods, where congregants include gangsters’ families and at times, gangsters themselves.

In mediating between gangs and their communities, Rodriguez filled a role thrust upon many priests and pastors here.

“In every community,” says Juan Carlos Carcamo, spokesman for the Evangelical Alliance of El Salvador, “there’s a religious leader that has some type of contact, because there’s no other option.” If a church doesn’t get involved, Carcamo says, “society would call it indifferent. When it does, it’s accused of being complicit.” Salvadoran gang members participate in an event with mediators including a Catholic bishop at Cojutepeque prison, east of San Salvador. (Juan Carlos/AFP/Getty Images)

Rodriguez, though, seems to have crossed a line that few religious leaders would, appearing to relish his ties to some of the world’s most dangerous men. He even jokes, in one conversation, that he is seen as a “palabrero,” or a gang boss.

Veronica Reyna, who worked on youth development projects with Rodriguez, says that working with gangsters can mean getting your hands dirty. “Ethical intention is one thing and reality is another,” she says, adding that Rodriguez’s goal was always to cool the violence.

After Rodriguez’s July 30 arrest, there were accusations of political persecution, a serious charge in a country where the 1980 assassination of Archbishop Oscar Romero still hangs like a pall. El Faro reported that El Salvador’s attorney general likely coerced Rodriguez’s confession, by leaking to church officials and Spanish diplomats intimate phone recordings that were unrelated to the investigation. The attorney general has vehemently denied the accusation.

Rodriguez loyalists thronged the courthouse upon his release, chanting hymns and holding up pictures of the late archbishop, who was gunned down while celebrating mass.

Supporters also rushed to greet Rodriguez at the Madrid airport, where he told them: “My only sin in El Salvador is that I began to work with the disenfranchised.”

But rarely in the recordings does Rodriguez make mention of his priestly duties, or morality, or even God.

He shows constant deference to El Viejo Lin, the aging gang leader whose cunning and barbarity have made him a household name in El Salvador. Lin instituted the gang’s practice of dismembering its victims when in 2002, he severed the head of a 16-year-old girl named Rosa, the girlfriend of an MS-13 gangster. “Poor Rosita, what have they done to you?” Lin allegedly joked as he held her head in the air.

“Just leaving mass,” Rodriguez says to Lin, upon answering one of his calls. “Praying early for the sinners.”

And then they both have a good laugh.