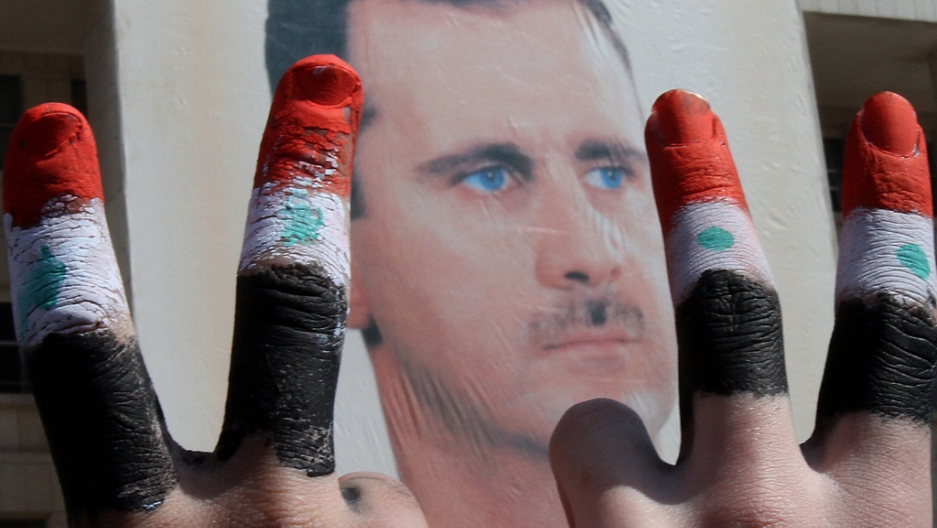 Two men with the fingers painted in the colors of the Syrian flag show the victory "V" sign in front of a poster of President Bashar al-Assad during a rally in central Damascus on March 29, 2011.
Credit: Anwar Amro
Share

In the shadow of the Islamic State, which has taken over large parts of Syria and Iraq — and has made beheading a thing it does — the world seems to have forgotten about the cruel deeds of Syrian President Bashar al-Assad.

Many Syrians are upset that US President Barack Obama decided to intervene to stop the brutality of the Islamic State, but refrained from using its robust military force to stop the brutality of the Syrian government. Some US allies even believe that it is Assad who is actually the root of the problem. It is the terror of the Syrian leader that allowed room for the terror of the Islamic State, the story goes.

"Why now?" one Syrian told Mike Giglio, a writer for Buzzfeed reporting from Turkey, near the Syrian border. "Is it because of the crime of the beheading of two American journalists? Or is it because this is really a terrorist group that terrorizes people in Syria? If so, then the regime has committed more crimes than ISIS. With much cruelty. People are dead in the prisons by the thousands. What about this?"

There was a time — in 2011 — when Syrians were peacefully calling for simple democratic reforms. Then Assad's security forces decided they would have none of it and violently cracked down on civilian demonstrators. An armed rebel alliance arose as a result, full-blown civil war erupted, foreign extremists entered the country, religious extremism took hold and all hell broke loose.

Through it all, Assad's regime continued to massacre Syrians. The United Nations says nearly 200,000 have been killed since fighting began. But no matter what Assad did — mass murdering civilians, torturing children, killing American journalist Marie Colvin — the United States refrained from intervening.

Here's a look at some of the Syrian president's worst offenses. Syrians men evacuate a victim following an air strike by regime forces in the northern city of Aleppo on August 26, 2013. US Secretary of State John Kerry called last week's alleged chemical weapons attack in Syria a "moral obscenity," in remarks on August 26, 2013.

The main thing you need to know about Assad is that his regime is responsible for killing a huge number of people.

Keep in mind that these are just "confirmed" numbers. And they are based on nearly 320,000 reported killings. The death toll is likely much higher than even that. As Navy Pillay, the UN High Commissioner for Human Rights, said, "Tragically it is probably an underestimate of the real total number of people killed during the first three years of this murderous conflict." In a report published in January 2013, a small team of international human rights lawyers presented conclusive evidence that the Assad regime had tortured and executed approximately 11,000 Syrians since the beginning of the conflict. Drawing on photographs and documents smuggled out of Syria by a defector from Assad's military police force, the lawyers concluded the regime has engaged in "systematic killing" on an "industrial scale."

3) Children trapped in an "archipelago of torture" Hossam, 13, said he was tortured by Syrian security forces.

"The level of torture is not comparable to any other conflict I've worked on," Anna Neistat, associate director for Program and Emergencies at HRW, told GlobalPost in 2012.

When it comes to Assad's thugs, it seems that no person is too young to be tortured. One in five detainees is a minor, says HRW.

GlobalPost spoke with some of the children tortured and imprisoned by the regime. Their stories are horrifying. An Aleppo University student shows Syrian citizens how to put on gas masks.

There's no shortage of war crimes when it comes to the Assad regime, but one of the more prominant violations has been the use of chemical weapons. Before the United States started bombing the Islamic State, the closest it came to striking Syria was after Aug. 21, 2013, when someone — there's international consensus that Assad's forces were the aggressors, although the regime continues to deny it — dropped weapons loaded with sarin gas on Ghouta, a rebel-held suburb outside Damascus.

More than 1,400 Syrian civilians were killed in the attack, and several hundred more were poisoned. It was the first large-scale use of chemical weapons since 1988, when Saddam Hussein used them against the Kurds near the end of the Iran-Iraq War.

Barack Obama famously warned that Assad would be crossing a "red line" if he used chemical weapons against his own people, but the United States didn't take military action and Obama probably wishes he could take that warning back.

5) Use of barrel bombs in densely populated civilian areas Barrel bombs are like chemical weapons in that they don't discriminate between civilians and soldiers, and, one could argue, this is their main value: killing huge numbers of civilians, destroying whole city blocks, and terrorizing the entire population. These bombs are highly explosive, unguided, and imprecise weapons made from cheap and available materials, like oil or water drums, and packed with explosives and scrap metal for maximum destruction.

Assad's army has repeatedly used barrel bombs, and in densely populated cities like Aleppo, the results have been devastating to human life and city infrastructure. Syrian army troops hold up portraits of President Bashar al-Assad (L) and his late father, former president Hafez al-Assad, as they pull out of the southern protest hub of Daraa after a military lockdown during which dozens of people were killed in what activists termed as "indiscriminate" shelling of the town.

The scale of killing is massive. The total horror of the Assad regime, though, often reveals itself at a small scale. Take the massacre in the town of Houla.

There, according to a UN report, Syrian government forces and fighters from the brutal, pro-government militia known as the "Shabiha" ("ghosts" in Arabic) killed more than 100 civilians in May 2012. Half of the victims were children. There were reports of armed gunmen spraying homes with indiscriminate weapon fire and going house to house to kill the men, women, and children inside.

The massacre prompted the UN Human Rights Council to pass a resolution condemning the regime for its deliberate attacks on civilians.

If you feel like getting inside the head of a Shabiha fighter — not that you'd really want to —  read this GlobalPost interview. A Turkish demonstrator in Ankara holds pictures last week of the late Sunday Times correspondent Marie Colvin and French photojournalist Remi Ochlik, left, during protest by journalists against violence on the news media in Syria.

The US fight against the Islamic State will always be bound up in the videotaped beheadings of American journalists James Foley, who worked for GlobalPost, and Steven Sotloff.

Rebel groups like Al Nusra and the Islamic State have played a large role in turning Syria into "the world's most dangerous country for journalists," according to Reporters Without Borders (RSF), but the Assad regime has been a major player, too. Assad's forces have consistently arrested, imprisoned, and killed journalists throughout the duration of the conflict.

Marie Colvin, an American reporter for the Sunday Times, was among the journalists killed while covering the war. She was killed alongside a prominent French photographer, Remi Ochlik, when the regime bombed a house where she was staying in the city of Homs. French President Nicolas Sarkozy claimed at the time that they'd been "assassinated," since the house was serving a well-known press center.