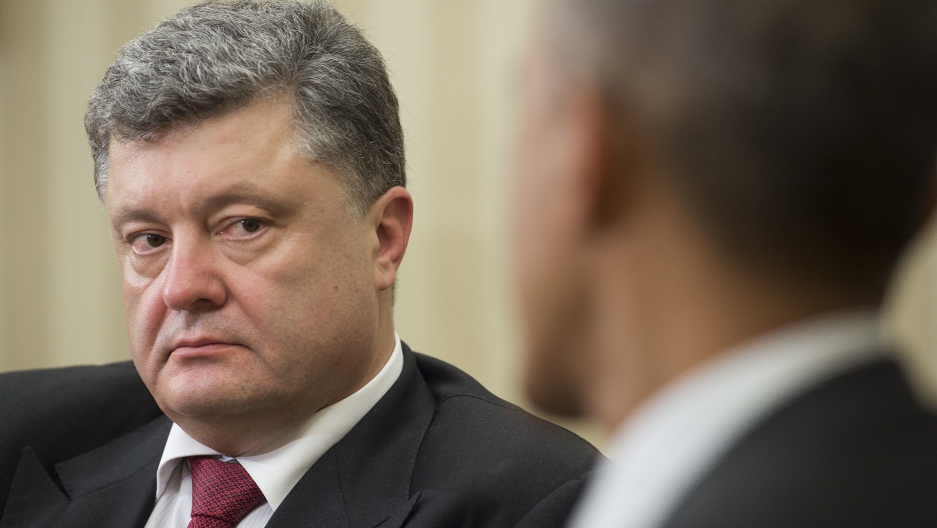 Poroshenko in Washington last week. Ukraine has failed to convince the US and other Western countries to supply weapons.
Credit: Jim Watson
Share

KYIV, Ukraine — To people in this besieged country, the chain of events that led to their current crisis couldn’t be clearer.

Fed up with a choking culture of bribery and corruption under former President Viktor Yanukovych, many supported his promise last year to sign a historic deal with the European Union they hoped would establish at least some accountability and Western values here.

Many now believe he was colluding all along with Russian President Vladimir Putin, for whom cultivating Moscow’s influence over Ukraine was an integral part of his project to remake his country into a great power.

Last September, however, Yanukovych’s last-minute reneging on the deal came as a shock. When police beat a group of protesting students, public outrage galvanized many others against what they saw as an increasingly authoritarian regime.

After Yanukovych fled in February, the Kremlin took its revenge on Ukraine’s new Western-looking leaders. Russia seized Crimea and launched a campaign to stoke violent separatism in the largely Russian-speaking east of Ukraine, where a nominal ceasefire is now helping entrench rebels whose campaign is having the desired effect of destabilizing a country approaching economic crisis.

So the arguments of some in the West who preach tolerance for Putin are generating anguish and disbelief — and increasingly outrage and hostility — toward the countries whose values Ukrainians believe they’re being left alone to defend.

In the United States, where calling for intervention is largely the domain of right-wing hawks — especially after the debacles of Iraq and Afghanistan — liberals who direct withering criticism at their own government believe Washington also has no business confronting Russia in its backyard. Citing Russian arguments that Ukraine’s new leaders are no less corrupt than the old, they conclude they’re not worth backing.

Some former diplomats have been especially vocal. Writing in London’s Telegraph newspaper, Tony Brenton — who served as British ambassador to Russia last decade, when his embassy was besieged by angry mobs organized by a Kremlin youth group — said the idea that the West should confront a revanchist Russia is based on false premises.

“Ukraine is a uniquely sensitive case for Russia,” he wrote. Both countries “are bound by deep social, cultural, and historical ties. Kiev is known as the ‘mother of Russia cities.’ And even in Ukraine the Russians want influence, not actual territory.’”

Putting aside arguments about how truly unified the Russian and Ukrainian civilizations have been, a senior Ukrainian diplomat named Olexander Scherba says such logic conflates apples and oranges.

Ukraine may indeed be a uniquely sensitive case for Russia, the youthful-looking head of the ministry’s international communications says, “but that doesn’t give it the right to attack our territory, to shell our military and seize our land. The logic is that I take away your home because Ukraine is a sensitive case for me?”

Ukrainians have welcomed Western financial aid and other support as well as sanctions enacted against Russia. But they would like more direct help, especially weapons for their dysfunctional military — something Washington believes would provke the Kremlin.

Dismissing another argument against confronting Moscow — that Russia’s actions are a logical reaction to NATO expansion last decade — Scherba says, “How does that justify killing and torture?”

Scherba partly blames his own government for what’s seen as lukewarm support from Western countries. Ukraine is “bad at getting the narrative right,” he says, adding that the foreign ministry can’t afford even to send him abroad to make his country’s case.

Russia, by contrast, spends millions on its English-language satellite channel Russia Today and other state-controlled media that produce a steady stream of propaganda Ukrainian officials believe they can’t possibly counteract.

The Kremlin has another great advantage. The Ukrainian government must rebut each false Russian claim that it’s led by fascists and neo-Nazis bent on killing Russian-speakers — even though a stroll along a corridor in any ministry here would reveal that Russian is most commonly used even among current officials.

Moscow, on the other hand, doesn’t have to do more than simply cast doubt on the Ukrainian narrative.

The Russian position that Ukraine is no longer a viable state, for example, is influencing Western debate by playing into the belief that financial and military support for Kyiv is futile.

“If this country has no chance, then why did hundreds of thousands of people come out onto the streets in the bitter cold and rain — young, old, men and women?” Scherba says.

“Ukraine is not Afghanistan,” he adds. “You don’t have to build a nation here, just help defend democracy. People are ready to give their lives for it. We get it. All we need is some help.”

The growing view here that Ukraine is fighting Europe’s battle by defending Western values against a country run by former KGB officers bent on exporting corruption and autocracy is raising the possibility of a backlash.

One adviser to the prime minister dismissed a question about Western arguments against aiding Ukraine with a flash of anger. “How can they possibly think that?” she said.

“If the West fails to teach Putin about democracy,” says the deputy prime minister and one of the government’s leading reformers, “he’ll teach it about dictatorship.”

European countries are partly to blame, Hroisman adds. “If they had acted in a principled way from the beginning, we wouldn’t be here,” he says. “Now Putin can only be contained.”

More from GlobalPost: Anyone who’s anyone is running for office in Ukraine

Political analyst Volodymyr Fesenko is more blunt. He believes those calling for restraint against Putin are seeking to justify their own inaction.

“When you’re comfortable, you don’t want to fight for what you believe,” he says of people in the West. “Easier to let someone else do it.”

Still, Fesenko believes Ukraine will slowly reform enough over the next decade for the EU to consider membership, thanks partly to the accession deal that was finally signed last week.

However, that’s only if the threat of war in the east subsides.

For now, Scherba says, the lack of Western support in that battle shows Western countries simply don’t understand the stakes.

“The truth is too terrible,” he says. “Americans don’t want to think about the necessity of confronting a country that’s a nuclear power.”