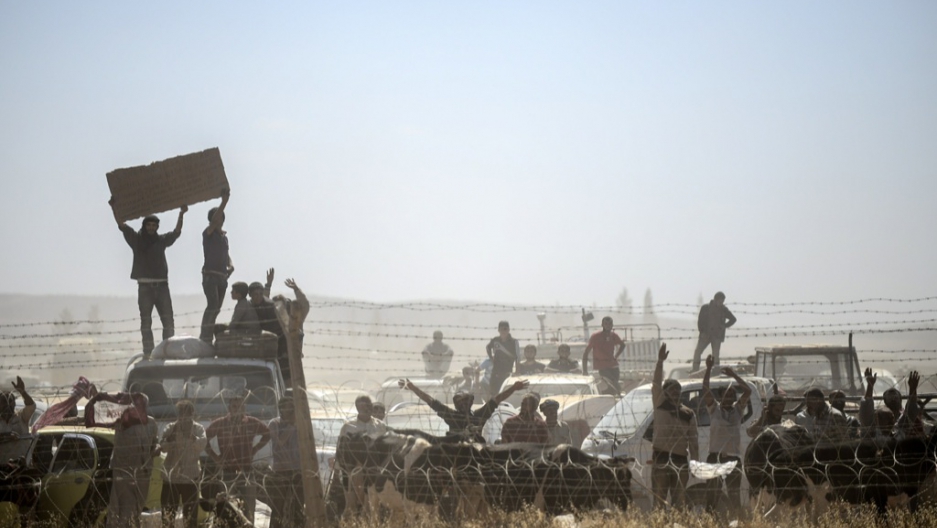 Syrian Kurds protest for more water at the border with Turkey in Sanliurfa province on Sept. 23, 2014. The UN refugee agency warned Tuesday that as many as 400,000 people may flee to Turkey from Syria's Kurdish region to escape attacks by the Islamic State.
Credit: Bulent Kilic
Share

SULAYMANIYAH, Iraq — The scenes feature in all the Islamic State propaganda videos. Bearded men dressed in black drive though the streets of Raqqa in tanks and combat vehicles seized from Syrian and Iraqi governments. Men and young boys wave black flags and cheer. Spliced-in footage shows executions and beheadings.

The northern Syrian city of Raqqa has made headlines since the Islamic State (IS), also known as ISIL or ISIS, seized control in January. It is now their capital — a place simultaneously shrouded in ghoulish mystery and the most successful example of a functioning, albeit tyrannical, Islamic municipality.

But could the US bombing campaign that started on Monday night be the beginning of the de facto IS capital’s demise?

“IS are now very scared,” said an Iraqi journalist who has been secretly documenting the activities of IS within Iraq. He spoke by phone from Mosul, the Islamic State's stronghold in Iraq. “Raqqa is the center of their Islamic State. If they cannot secure this then nowhere is safe for them. They lost their center of operations [in Raqqa]. Most of them have now moved to the desert between Iraq and Syria on the border areas.”

Joining the US-led operation on Monday night were Bahrain, Jordan, Saudi Arabia, Qatar and the United Arab Emirates. This international coalition has already dealt a hard blow against IS, which has seemed confident and even arrogant about its ability to combat the US since strikes first began against the group in Iraq last month.

“It is clear they are worried,” said the journalist in Mosul. “They don't know how to fight such a coalition. They change their places daily, especially when US aircraft fly over. The fighters hide among the Mosul neighborhoods in populated areas using people as a buffer against the strikes.”

But civilians stuck under the extremists' control, he said, were happy about the news of strikes on Raqqa.

“People [in Mosul] are talking about IS losing. They are happy they may be gone soon. They have suffered greatly from IS,” he added.

The news of the US bombing campaign inside Syria, the first since that country’s civil war began three and a half years ago, first broke on Twitter Monday as locals tweeted about the sound of aircraft and explosions.

“Breaking: Huge explosions shook the city in what might be the beginning of US airstrikes on ISIS HQs in Raqqa,” a user going by the name of Abdulkader Hariri tweeted in the early morning hours.

“The sky is full drones over Raqqa now,” followed a second tweet. Hariri's information was widely cited by Western media reports (to the point that he tweeted Tuesday, "I want to apologise to journalists. I can't reply to you all").

One Twitter user — an IS sympathizer in Raqqa using the handle @Shamisurgeon — tweeted photos of an explosion and video footage showing what he claimed were civilian victims of the strikes.

Among Syrian rebel forces, many of whom have long sought assistance from reluctant Western powers, reaction to the bombing campaign was mixed. Some applauded the air support that may open the way for the rebels to gain more territory.

“This will weaken the Islamic State,” said Abu Musaab, a Syrian rebel fighter based in Aleppo, typing via Skype on Tuesday. “As they flee the airstrikes, we will move in and push them right back to Iraq.”

But Khilad Suliman, a Syrian rebel activist from Homs, in central Syria, said he feared the strikes would do little more than further raise the death toll from the war in Syria — currently near 200,000.

“The [US] warned IS that they were going to strike Raqqa,” he said. “Who warns their enemy beforehand of a military strike? The IS forces have already moved their weapons and fighters into areas of the countryside a month ago.”

Suliman fears the US strikes would only strengthen IS support and increase the number of fighters flowing into Syria and Iraq to support them.

“No matter how advanced their weapons are or how good their intelligence, no bomb can kill IS selectively and leave civilians safe,” he added.

In Washington, the airstrikes were celebrated as a key victory against IS.

“To defeat [the Islamic State], we must cut off the head of the snake, which exists in Syria,” said Michael McCaul, chairman of the House Committee on Homeland Security, in a statement Monday.

But as IS made clear in a propaganda video released last week titled the "Flames of War" — over a backdrop of combat scenes, death, and jubilant jihadists driving victoriously through the streets of Raqqa — "the fighting has just begun."