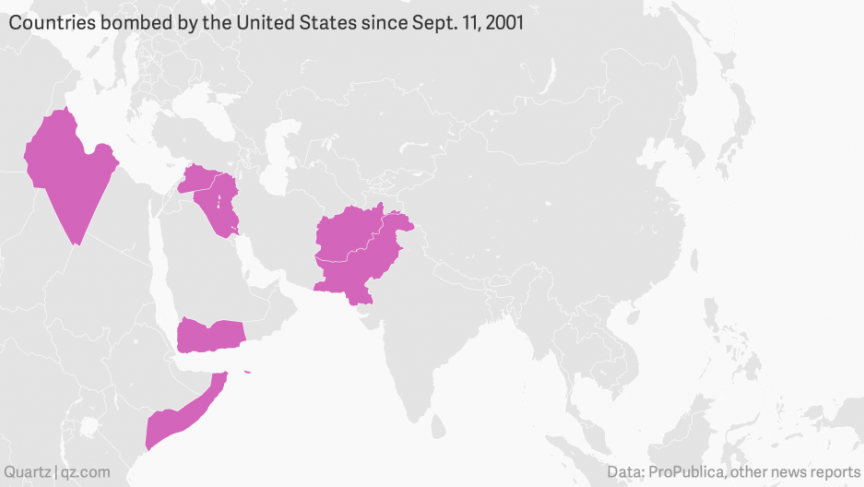 Syria, welcome to the club!

Since 2011, the US has bombed six separate countries — Somalia, Yemen, Libya, Pakistan, Afghanistan and Iraq — and with the start of bombing in Syria that number has increased to seven.

Quartz reports on the latest developments in Syria, and suggests it may actually be the eighth country that has experienced US bombings in the past three years, given allegations that US drones conducted airstrikes in the southern Philippines in 2012. US and Philippines officials, however, deny those allegations.

Liberia has agreed to stop cutting down trees in exchange for international aid. And Norway has agreed to pay the country $150 million to end deforestation by 2020. Norway announced its initiative on the sidelines of the UN climate conference underway in New York City this week.

Liberia is home to roughly 43 percent of West Africa's remaining rainforests and is, therefore, considered critical environmental habitat. It's also home to the last surviving habitats of certain endangered birds, plants and crustaceans. The BBC reports that there have been fears the country's ongoing Ebola crisis would lead to an increase in logging.

Years and years of human mismanagement, coupled with the devastating effects of climate change, are causing huge chunks of Lousiana to disappear — at a rate of a football field an hour. Over the course of a year, that added up to more than 16 square miles of Louisiana reclaimed by the Gulf of Mexico. And that's actually an improvement over just a few decades ago, when as many as 50 square miles were disappearing every year.

The problem began even before climate change became an issue. First, we erected levees and prevented the Mississippi River from reinforcing the land it had deposited in the delta over centuries. Then, we allowed drilling for oil and natural gas in the delta. Finally, we allowed the construction of canals and streams that divided the land and made erosion easier. All of that, coupled with laws that don't require companies to restore the land they use, has led to massive erosion, as PRI's Living on Earth reports.

The Kurds have proven to be the most stable and successful faction of the Iraqi population, and they've proven to be the most effective bulwark against ISIS, which has seized control of a vast swath of Iraq and Syria. The Kurds have also been America's strongest ally and a symbol of the pro-Western, liberal, democratic state that President George W. Bush articulated when he set out to rebuild Iraq after conquering the country in 2003. The New Yorker looks at how the Kurdish minority has developed its own proto-state and what the future may hold for it.

Add a little bitter to your diet

The English-speaking world is among the few places where bitter flavors aren't just disliked, they're avoided. We've gone out of our way to keep bitter flavors off of our plate, without actually giving up the foods that are typically bitter. Take grapefruit, for example. Just a few years ago, most grapefruit was bitter, so we added sugar to it — but with selective breeding, today's grapefruit can be downright sweet.

In other parts of the world, bitter flavors are celebrated and used to set off richer, complex flavors. In China, they are often used as medicines and are actually rich in healthy compounds. Bitter foods and their history in global diets are the subject of a new book by author Jennifer McLagan. PRI's The World spoke to McLagan about this neglected part of the flavor wheel — and, yes, we have some recipes.

If the Chinese Communist Party ruled the UK, 2 million+ Scots could go to jail for life for separatism. #IlhamTohti #Xinjiang #thoughtcrime

Northern Parkistan and northwest India continue to deal with torrential and deadly flooding this week. According to Al Jazeera, three days of heavy rains have killed at least seven people with some cities reporting nearly 3.5 inches of rain in less than 24 hours.