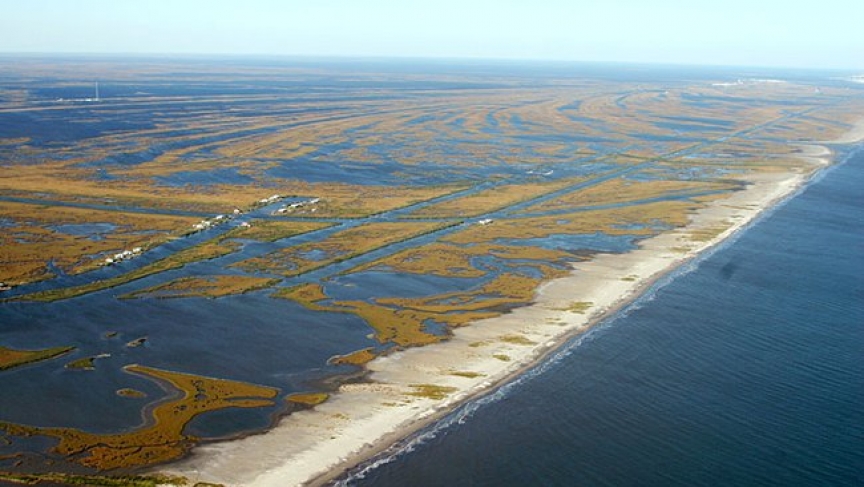 The wetlands that protect southern Louisiana, including New Orleans, from flooding are disappearing.
Credit:

Dramatic erosion and sinking land along the southeastern coast of Louisiana could lead to “the largest forced migration for environmental reasons in the history of the country,” a new report says.

According to the report, called Losing Ground, changes in the Mississippi delta that were designed to increase flood protection and enhance oil and gas production have led to an unprecedented loss of land. Bob Marshall, a reporter with the New Orleans news site The Lens, has covered coastal land loss in Louisiana for decades. He collaborated with ProPublica to publish the new report. ProPublica used official US Geological Survey topographical maps, aerial photographs and satellite photographs going back to before the 1930s and combined them to create a powerful visual representation of just how much land has been lost in the past 80 years.

Marshall says people who have been reading his stories for decades tell him, ‘This is the best thing you've ever done.’ “The words are pretty much the same,” he says, “but these graphics really hit home as you watch ... these pristine wetlands in the 1930’s turn, in some areas, to open water. You watch as these canals [come] in and the place just open[s] up and [falls] apart.”

All of this results from three processes that reinforce and amplify each other’s effects: levee construction, oil and gas exploration and sea level rise.

All of southern Louisiana, from Mississippi to Texas, was built by the Mississippi River, Marshall explains. The river’s delta-building process goes back 7,000 years, to the end of the last glacial period. “When the river hits the flat plain, it slows down and the sediment it's carrying begins to fall out,” Marshall says. It's not just the main stem of the river that deposits sediment: all the distributaries that “peel off the river on its deltaic plain” deposit various amounts and types of sediment also.

During the spring floods, the river and all its distributaries would overflow their banks and spread the sediment — “nature's cement,” Marshall calls it — across the entire delta.

This natural process was still happening when Europeans arrived. When New Orleans was founded in 1718, the river and its distributaries were still creating land out in the Gulf of Mexico, Marshall says. “Everything went along as nature intended it until we began developing along the river, and people began putting up levies so that they wouldn't get flooded by the river every spring,” Marshall says. Levees block the river from spreading additional sediment onto its delta. When a river can't replenish its delta, that delta begins to subside.

Levee building on the Mississippi dates to the 1850s, but after the Great Flood of 1927, when most of the Mississippi River Valley from Illinois to Louisiana was submerged, Congress ordered something more be done. The Army Corps of Engineers built the series of enormous levees we have today. “They put the river in a straitjacket, permanently blocking the river from getting back to its delta to replenish this land,” Marshall says.

If that's all we had done, Marshall says, the delta would have subsided at “an infinitesimal rate — milliliters per year — and the wetlands that were intact in the 1930s when these levees were finished would still be largely intact today." But that isn’t all we did.

As the corps was finishing the levees, oil and gas were discovered in the coastal zone, and companies moved in. At the time, there were no laws or regulations protecting wetlands. “Eventually 50,000 wells were permitted in the coastal zone,” Marshall says. “Over 10,000 miles of canals were dredged for oil and gas, 500 miles for shipping — and we basically eviscerated this incredible delta.”

Dozens of reports show the highest rate of land loss occurred in areas with the heaviest amount of oil and gas extraction and canal dredging, Marshall says. According to some studies, the oil and gas industry is responsible for anywhere between 36 to 60 percent of the loss.

“So we're fighting this massive loss of surface land [and] we're also subsiding because we're not replenishing these wetlands,” Marshall says. “On top of that, here comes global warming and sea level rise.” According to the National Oceanic and Atmospheric Administration, southern Louisiana has “the highest rate of relative sea level rise of any place in the country, and one of the highest rates anywhere on the planet.”

Communities across the southern portion of Louisiana are now faced with having to move. “People are stunned and angry and they want someone to pay to keep their communities where they are — but the cost is just too high,” Marshall says.

One only needs to look at recent history, Marshall says, to see what the future could hold: Delacroix Island, a Spanish settlement about 30 miles from New Orleans, was founded in the late 1700s or early 1800s and survived into the late 1950s. “They had a subsistence lifestyle; they were fisherman, trappers; they picked Spanish moss to sell to furniture makers,” Marshall says.

When canal dredging started in the '30s and ‘40s, the wetlands around Delacroix began falling apart. The lagoons and the bayous widened; the lakes got bigger. “Eventually, the storms that came through made it impossible for them to live there full-time,” Marshall says. That whole culture is now gone.

Even after passage of the Clean Water Act in 1972, oil and gas companies were never forced to comply with permits requiring that they restore land to its prior state after working it. Canals were never refilled; waste pits were not properly disposed of. In many cases, Marshall says, when wells ran dry, companies just abandoned the area without being held accountable for the damage.

A landmark lawsuit brought last year by the local flood protection authority is seeking compensation from 97 oil, gas and pipeline companies. But it has provoked the ire of the state’s political establishment. Governor Bobby Jindal promised to get the legislature to pass laws retroactively preventing the levee board from suing, and managed to get a bill passed. The law is being challenged in federal court.

Meanwhile, parts of Louisiana continue to disappear at the rate of about a football field an hour.