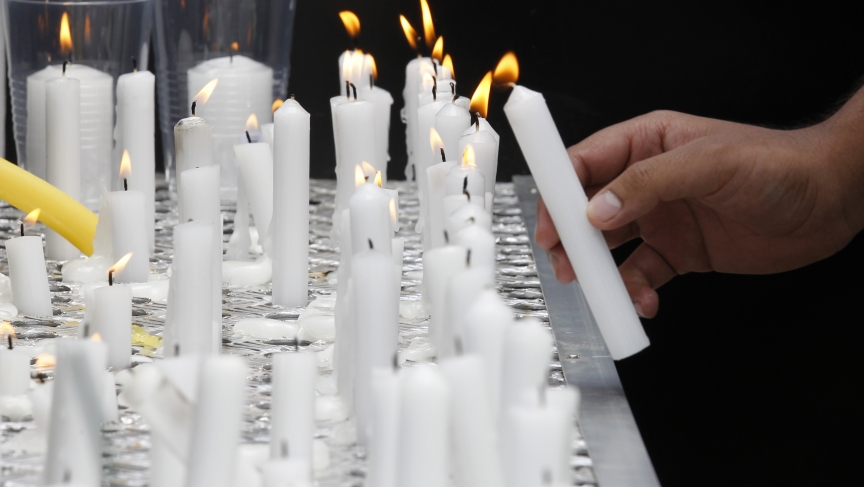 A relative of a victim lights a candle during the first anniversary memorial service of the Westgate shopping mall terrorist attack in Kenya's capital Nairobi on September 21, 2014.
Credit:

Gunmen stormed the upscale Westgate shopping mall in Nairobi, Kenya, one year ago. The militants entered the crowded building with guns blazing, shooting civilians at random. They killed 67 people and battled with security forces for four days before dying themselves.

Militants from Al-Shabaab, an Islamist terror group based in Somalia, claimed responsibility for the mall attack, saying it was retribution for Kenya's troop presence in their country. Kenyan journalist Laura Walubengo reported on the Westgate siege — as well as the ceremonies this week that marked the anniversary.

“We had the memorial in Nairobi over the weekend, where people basically came to share their experiences,” Walubengo says. “They came to let the ghosts lie, to try to put it behind them, because you cannot even imagine the pain that somebody goes through. A lot of people who were there were just grateful to be alive.”

The Kenyan police and army have been criticized for their response to the Westgate siege. It took hours before the police's tactical team went into the mall, leaving security guards and volunteers to fend for those trapped inside. Lack of coordination between the military and the police led to friendly fire in which one police officer was killed and others were wounded. There were also reports of looting by police officers during the siege.

Anger at the Somali attackers still lingers, though it's been redirected toward the city's Somali immigrant population.

“There was a lot of negative sentiment toward the Somali community,” Walubengo says. “But then you realize that there are people you do know, who are in that community, so you stop looking at them as your enemy and you look at them as just people.”