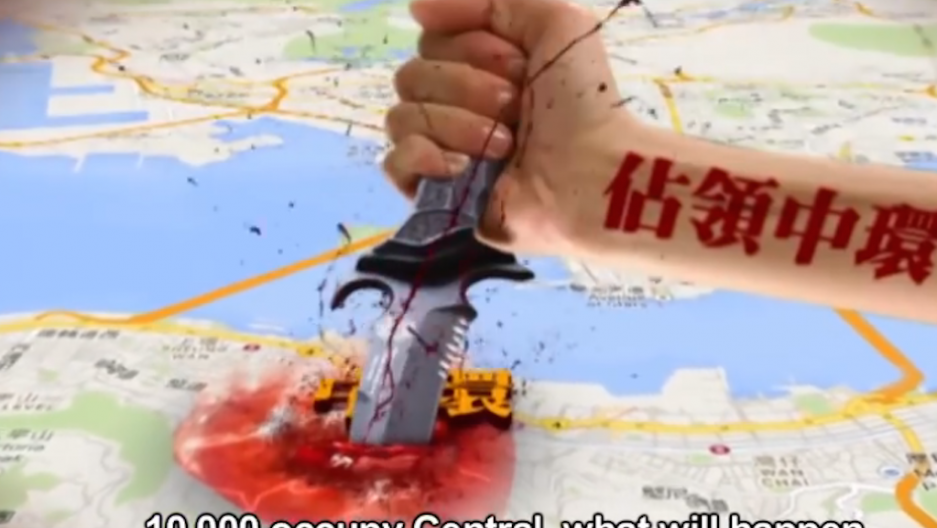 The Hong Kong democracy movement calls itself Occupy Central with Love and Peace. Detractors predict traffic Armageddon, saying it would be a "knife in the heart" of the city.
Credit:
Share

BANGKOK, Thailand — At its best, Hong Kong is many things that China is not — a freewheeling bastion of capitalism, with strong democratic leanings and a reverence for private sector efficiency.

Still, the Hong Kong “special administrative region” — officially part of China but governed separately — has a vocal contingency that backs its Communist Party overlords in Beijing.

In recent weeks, these Party supporters have had a somber message for their city. They warn of a potential threat that could paralyze Hong Kong, leave bodies in the streets and give bandits free reign. “They could kill this city,” according to the not-so-subtle messaging.

The peril is not a nuclear holocaust. It’s not an influx of Ebola victims.

That would be a “knife in the heart” of Hong Kong, according to an ominous video by the pro-Beijing group Silent Majority for Hong Kong, which calls the pro-democracy crowd “agitators.” Their predicted outcome: apocalypse-level gridlock, cops and ambulances stuck in traffic, and Hong Kong plunged into anarchy.

The current hubbub is rooted in the Opium Wars of the 1840s, when British forces conquered this idyllic seaport region in an effort to rectify its trade imbalance. British rule led to a very different development model in Hong Kong, leading to prosperity and a fierce independent streak.

Finally, in 1997, London handed the territory back to China with the understanding that it would eventually enjoy a freedom unheard of under colonial or mainland rule — the ability to elect its leader.

Nearly two decades later, with Hong Kong residents growing impatient, China’s Communist Party rulers announced that the long-awaited day will come in 2017. But there’s a catch. In late August, Beijing decreed that the election’s candidates will be vetted by a panel loyal to the Party.

Many in Hong Kong now feel bamboozled. Their frustration has given rise to a movement called Occupy Central with Peace and Love.

This rhetoric may sound noble to Western ears. But to China’s authoritarian leaders, who believe public harmony trumps individual rights, it sounds like the coming of the Arab Spring. Beijing has watched uneasily as pro-democracy protests — a prelude to outright civil disobedience — have drawn hundreds of thousands in recent months.

“If we don’t have true democracy ... we’ll be like any other second- or third-tier city in China,” said Lai Chong Au, an organizer for the Occupy Central movement. “We’re not trying to ruin Hong Kong. We’re trying to help Hong Kong.”

Lai Chong — a banking professional in her thirties — is fairly emblematic of the city, a financial hub powered by well-educated go getters. This white-collar class also has plenty to lose by taking on the police. Occupy is asking its most devout followers to keep a steady presence of 10,000 people willing to “give themselves up to the authorities.”

The movement hasn’t announced when it will execute this plan. But organizers promise it will happen “very soon.” They have grown increasingly aggravated. Already this week, university students are boycotting classes in protest of Beijing’s unfulfilled promise to allow real democracy. Student activists contend they are ready to fight for years.

A statement from the Occupy movement says China has “brutally strangled” hopes for freer elections. Those are strong words inside a country run by a party that loathes dissent. There are signs that China increasingly views Hong Kong as an unruly child.

According to Reuters, Beijing’s top official in Hong Kong privately told lawmakers pushing for open elections, “The fact that you are allowed to stay alive already shows the country’s inclusiveness.” Yet another Beijing-appointed official described the protest plans as “radical and illegal activities.”

Beijing’s ultimate nightmare is that Hong Kong will elect West-leaning leaders who prove hostile to the mainland and stoke the flames of independence. A Communist Party document leaked last year warns that citizens advocating Western-style democracy are being manipulated to undermine communist rule.

But fears of Hong Kong turning aggressive toward the mainland are overblown, Lai Chong said. “I don’t see why we’d want to go against the Chinese government and ruin ourselves,” she said. “China’s a very good market for Hong Kong. We want to work together.”

Pro-Beijing groups such as Silent Majority for Hong Kong have emerged to undercut calls for civil disobedience. The group warns that “just before the dawn of democracy, Occupy Central movement wants to darken this hour of our history.”

Their slogan: “Democracy without chaos!” Their message: antagonizing mainland China with “social disturbances” goes against “the fundamental values of Hong Kong and her people.” Silent Majority for Hong Kong did not respond to GlobalPost’s interview requests.

Both sides of the debate claim to embody the true wishes of Hong Kong’s people.

But polls suggest the population is divided. Roughly half of Hong Kong’s inhabitants hope Beijing’s plans for communist-vetted elections are turned down, according to a survey conducted by the South China Morning Post newspaper.

That doesn’t mean Hong Kong has much faith in a 10,000-person sit-in challenging China’s might.

The same poll asked Hong Kong residents if Occupy Central will succeed in securing freer elections. Those who believe the movement will triumph added up to only 5 percent.