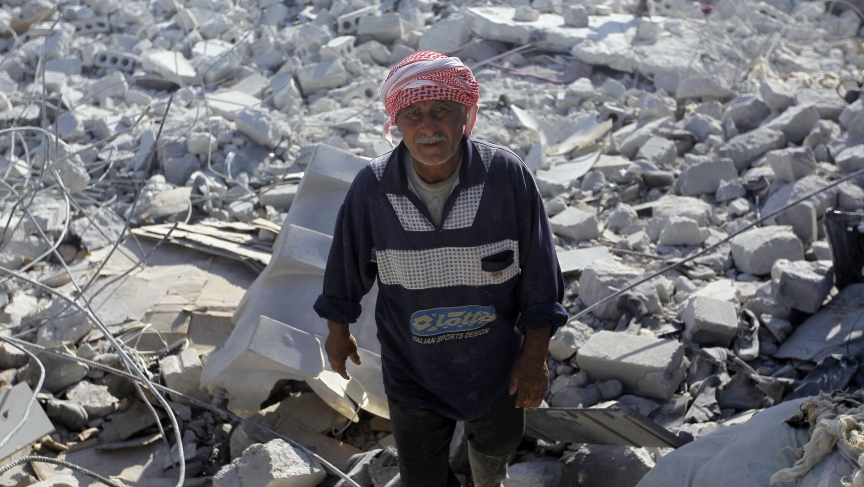 A man inspects a damaged site in what activists say was a US strike in Kfredrian, Idlib province, Syria, on September 23, 2014.
Credit:

In addition, Central Command said that American forces "took action” in Syria against “a network of seasoned al-Qaeda veterans” from the Khorasan group, which is led by Muhsin al-Fadhli, a senior al-Qaeda operative who was close to Osama Bin Laden. The attacks carried out by American forces were reportedly designed to disrupt “imminent attack planning against the United States and Western interests.”

Aki Peritz, a former CIA analyst and co-author of "Find, Fix, Finish: Inside the Counterterrorism Campaigns that Killed bin Laden and Devastated Al Qaeda," says that the Khorasan Group is part of the terrorist organization Jabhat al-Nusra, which is an al-Qaeda affiliate operating within Syria.

“According to press accounts, [the Khorasan Group] are these old school al-Qaeda guys who potentially predate 9/11,” he says. “Supposedly they’ve actually come to Syria to do, as the Pentagon says, ‘imminent attack planning’ to recruit individuals. It’s a lot easier to recruit potential fighters in Syria than anywhere else in the region.”

But the relationship between these organizations is complicated. “ISIS and Jabhat al-Nusra — and, by de facto, al-Qaeda — have actually been at war with each other for a while,” Peritz explains. Like Jabhat al-Nusra, ISIS once pledged allegiance to al-Qaeda. But the group was shunned for its draconian enforcement of Islamic law, which alienated locals.

Yet Syria still offers organizations like the Khorasan Group a vacuum in which it can operate, even despite the internal conflict with other Islamist grojups. "It’s one of the few places in the world where the United States, up until last night, allowed al-Qaeda to sort of do whatever it wanted to do without much consequence," Peritz says.

The airstrikes on Monday focused on the Syrian city of Raqqa, the capital of ISIS' self-declared Islamic State. Peritz says starting there represents a “great first step.”

“ISIS is pretty vulnerable to air attacks as of right now,” he says. “But we’ve got to remember this is a terrorist organization — it’s not a huge army; it’s not like the Red Army. If the United States continues with this air campaign, it’s going to run out of targets to hit. And then what do we do?”

Peritz says that in order to make the air campaign successful, strikes should be supported with ground troops.

“You can never win an insurgency from the air,” he says. “For us to do pinprick attacks, to attack specific buildings and specific convoys, it’s not going to significantly degrade ISIS’s capabilities — until we have some sort of ground force to actually take them on on the battlefield itself.”

Of course, Peritz says that ISIS' leader, Abu Bakr al-Baghdadi, has been preparing for that. “He’s been breaking people out of jail — out of Abu Ghraib; out of the Mosul jail — for the past year,” says Peritz. “He’s been getting his dream team ready for this event. He’s a really thoughtful guy, and he’s not going to go quietly into the night.”

While strikes targeted ISIS, reports incidated that at least eight civilians in Raqqa were killed in Monday’s attack. But Peritz says that the 200,000 residents of Raqqa live in fear of ISIS militants, so some support likely remains.

“If I were an average citizen of Raqqa and I had to live under ISIS for the last year or year-and-a-half, I would actually see this as a positive development,” he says. “In terms of hearts and minds, it shows that the United States is actually getting in the game, which we haven’t been doing for the last three years, and which a lot of the rebels have been begging us to do.”

But Basma Akbik, a Syrian-American living in Cincinnati, is mostly nervous for the family she still has in Damascus. She says she has waited for years for the US to take action in her country, but she worries that these strikes may be too late — especially now that ISIS has now embedded itself in civilian areas and is using the communities as a de facto shield.

"In my opinion, it’s very good that hopefully we’re going to get rid of ISIS," she says. "But more civilians are going to pay the price.”

And like Peritz, she believes the problem can't simply be solved from the air. “Those are ideologies that have been fed by bigger things — it’s bigger than only ISIS. Airstrikes won’t do the job," Akbik says.

Akbik’s family and community back home in Syria have been directly affected by the conflict playing out in the streets there. Her neighbor was killed, and her friend was kidnapped. “It’s just so hard and scary to wake up every morning and hear this bad news,” she says. “I don’t know when the shell or the mortar will hit one of my family members—it is so scary.”