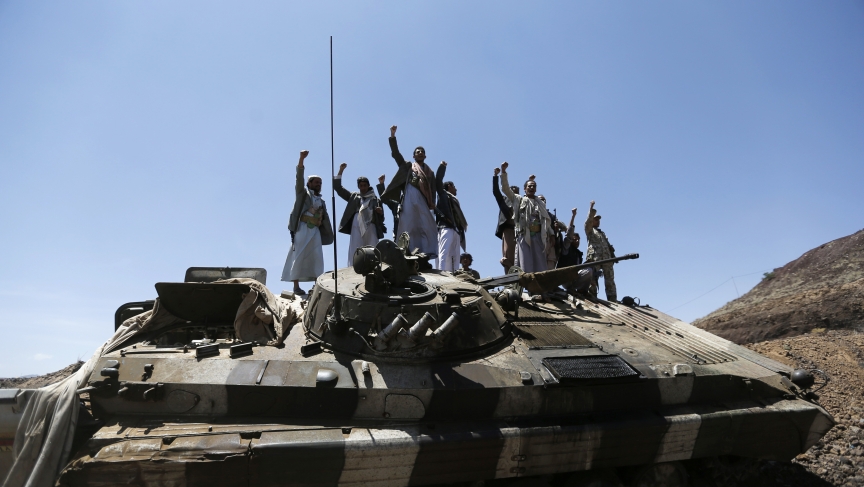 Shiite Houthi rebels gesture as they stand atop an army vehicle they took from the compound of the army's First Armoured Division in Sanaa on September 22, 2014.
Credit:

Like many residents of Sana'a, Yemen's capital, Iona Craig woke up Sunday to find her neighborhood under the control of rebel Houthi fighters from the country's north.

"A lot of it seemed to be pre-arranged," she told The World. "Major government buildings were taken over without a shot being fired ... There was a distinct absence of soldiers that normally guard those positions."

The three-day-long siege by Houthi forces was the culmination of a month of demonstrations. "Houthi protests that began in August were about dissolving the government, who they regarded as corrupt and ineffective," Craig says. "They were also demanding that the popular fuel subsidy be reinstated."

Craig said the deal that ended the fighting, the Peace and National Partnership Agreement that was brokered by UN envoy Jamal Benomar, gave the Houthis both. "The fuel subsidy has been lifted now, and the price of fuel dropped overnight," she said. "And the formation of a new government, with significant Houthi representation, is scheduled to take place within a month."

But Craig also explained that the Houthis have other objectives. "A lot of this is about the territory that the Houthis have been seizing control of over the past year — fighting down from their stronghold in Saada, in the northern part of Yemen, all the way to the Yemeni capital." A day after the fighting ended and a deal was signed, "it is still not very clear if [the Houthis] will be forced to give up control of those areas."

The Houthis belong to the Zaidi sect of Shiite Islam. They have been struggling for a decade against Yemen's Sunni-dominated government, and apparently used their moment of triumph to harass high-profile members of the Sunni Islah party, Yemen's counterpart to Egypt's Muslim Brotherhood.

The home of Nobel Prize-winning activist and Islah figurehead Tawakkol Karman was occupied by a dozen Houthi fighters Saturday night. Yemen's Prime MInister Mohammed Salem Bassindwa, considered close to the Islah party, was forced to step down. And the army general who lent support to Islah and youth protests during Yemen's own Arab Spring, Ali Mohsen al-Ahmar, went into hiding as Houthi fighters raided his home in Sana'a.

What might be regarded as an internal matter for Yemen may have international repercussions. "I think the major concern is the instability in Yemen," Craig says. "There's a huge humanitarian problem here. The security issues obviously involve al-Qaeda ... There's a lot of fear that al-Qaeda will organize against the Houthis and turn this into a nasty sectarian conflict."

But sectarianism is only one layer of Yemen's complex disputes: "It's also about taking tribal control and tribal influence away from Islah, and it's all about politics — about who's going to have control and influence in the next government when it's formed in the next month."