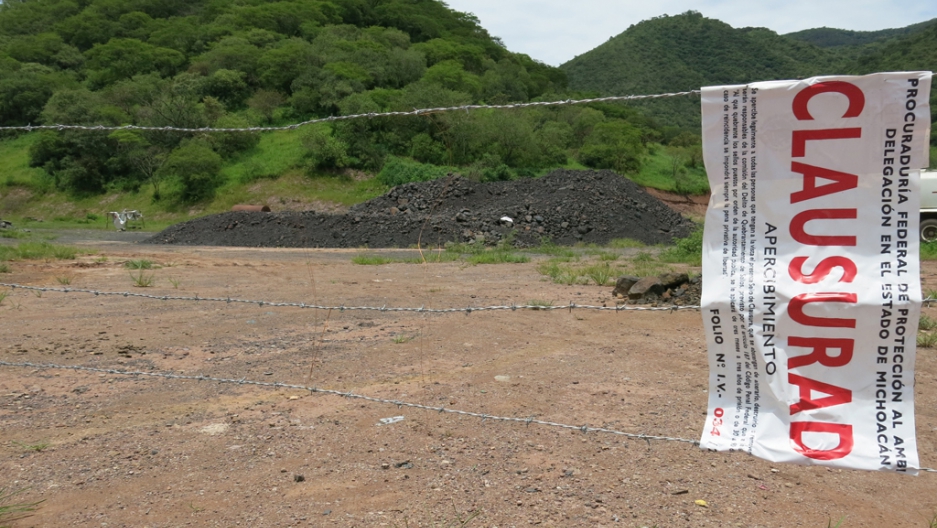 "Clausurado" — closed. This iron mine in Aguililla, in Mexico's Michoacan state, is one of many victims of the cartel fight.
Credit: Ioan Grillo
Share

Government security forces descended on an open-pit mine here in July to shut it down and confiscate hundreds of tons of raw metal.

The reason? The mine was operated by the bloodthirsty Knights Templar cartel, which has diversified from cooking crystal meth to a range of rackets.

It was not the only narco mine. Since soldiers and marines flooded Michoacan in January to fight the Knights Templar, they have helped shutter more than 100 pits of iron, copper and other metals. In total, a whopping 700,000 tons of minerals have been confiscated and are piled up in mounds like this. The government of President Enrique Peña Nieto has touted the seizures as proof it is fighting organized crime.

But the crackdown has had an unwanted side effect. More than 6,000 direct jobs have been lost from the closures, according to the local miners union, which has organized marches to try to get pits open again.

One such mine worker, Rolando Chavarria, squats on the Aguililla site under a tarp, cooking beans and tortillas. He normally uses his truck to carry the ore down the hill but is now unemployed and scraping to get by.

“It is good the government fights crime but what about us?” Chavarria asked over his boiling pots. “We need some income. I am going to starve to death if they don’t get this mine open again soon.”

The glimmering piles of metallic rock and hungry miners illustrate President Peña Nieto’s challenge in fighting cartels that have diversified into a broad portfolio of criminal activities.

A decade ago, most Mexican drug traffickers used to simply traffic drugs.

The billions of dollars in these businesses fund violence that has claimed more than 70,000 lives since 2006.

Many mines are in sparsely policed mountains inside traditional drug-producing areas like Michoacan, so they were easy prey for cartels.

Gangsters in Michoacan began by simply shaking down mines for extortion payments. One businessman who owns an iron pit in the state (as well as building sites in Mexico City) says cartel emissaries began to charge him a quota back in 2009.

“How could I refuse to pay? I didn’t want me or my employees to end up dead,” the owner said. “It became an extra cost that I had to take into account to run the business.”

However, as the Knights Templar saw the bubbling profits involved they started cutting out the middlemen and forced people to sell them — or give them — the mines.

A police checkpoint in a road to an iron mine in the Aguililla community, in Michoacan State, Mexico. (Alfredo Estrella/AFP/Getty Images)

The cartel also began excavating in pits without permits and ignoring environmental regulations.

In the first six months of 2013, a record 5.5 million metric tons of minerals sailed from the port to China.

The Knights also shook down Michoacan’s farmers, including its vast avocado industry, a big source of guacamole for hungry Americans.

Many angry farmers were so furious about paying the gangsters they supported a vigilante movement to fight the Knights Templar. The Peña Nieto government eventually allied with these vigilantes and in May allowed many to be deputized into a new Rural State Force.

The combined forces of vigilantes, soldiers and police hammered the Knights Templar and their bloody grip on the state this year. More from GlobalPost: How Mexico's west was won: It took a village, and plenty of AK-47s

But the mining industry has also been shattered. In the first half of this year, the amount of ore heading from Lazaro Cardenas to China hurtled down to 1.2 million metric tons.

In Aguililla alone, this has put a total of 500 people out of work in a mountain community with few sources of income, says Adalberto Fructuoso Comparan, a former mayor who joined the vigilantes and is now local head of the Rural Force.

“It doesn’t just make the miners unemployed but impacts the whole economy,” Comparan said. “There are people who transport the minerals, people who sell food to the miners, companies that provide material for the mine.”

The government promised to reactivate the industry following the closures.

“We have gotten past the security crisis. Now we are thinking of the problems of lack of opportunities,” Interior Secretary Jose Miguel Osorio Chong said in Lazaro Cardenas in July. “For this we offer the support of the government to Michoacan.”

However, moves to restart the mining industry are slow. In mines that have operated illegally, entirely new regulatory processes need to begin.

Only two of the 100 shuttered pits have so far reopened, according the union.

It is also unclear what the government will do with all of the properties — and hundreds of thousands of tons of iron.

Mexican police normally auction off seized narco assets, from small planes to luxury cars. But that could be more difficult with mountains of iron ore scattered over the highlands.

Residents close to the closed pits say the lack of work has led to more common crimes, such as mugging and burglary.

“The government needs to move faster to get pits open or there could be consequences,” Comparan said in Aguililla. “The people in these communities need jobs urgently. It is the lack of opportunities that makes people turn to organized crime in the first place.”