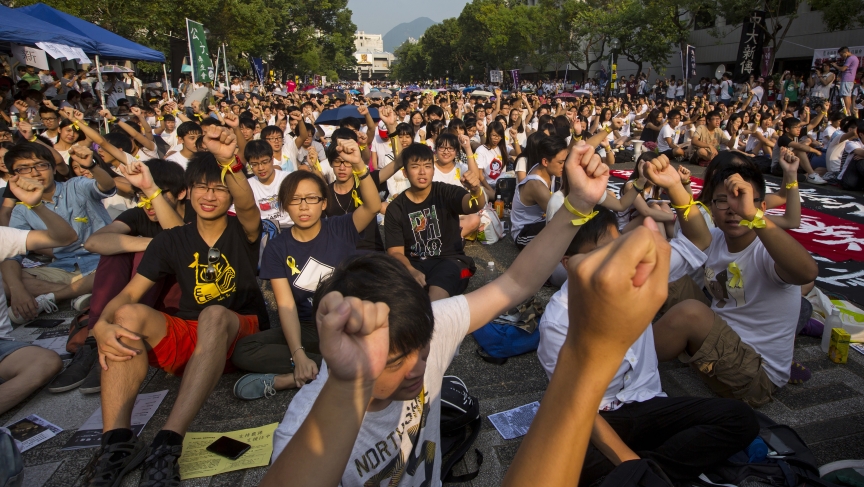 Students and teachers shout during a rally at the Chinese University of Hong Kong on September 22, 2014, the start of a planned week-long class boycott for more democratic freedoms.
Credit:

Hong Kong students only care about getting good grades and landing a high-paying job. At least, that's the conventional wisdom about most of the Chinese territory's 80,000 or so college kids. But it might be wrong.

Organizers said 13,000 students showed up for a pro-democracy rally on Monday. They gathered in the sunny heat on campus of the Chinese University of Hong Kong for the start of a planned week-long boycott of classes. And pro-democracy activists hope this is just a prelude to a broader civil disobedience campaign expected to kick off next week.

Students wore yellow ribbons, the color adopted by supporters of the campaign for electoral reform, as they listened to speeches and held placards bearing the names of their university departments.

“We are here to fight for our democracy,” one young man told the BBC. “I want my voice to be heard,” said another. “We want true democracy. We want genuine universal suffrage for Hong Kong."

Motivation for the rally and the larger pro-democracy movement in Hong Kong goes back to an August 31 decision by the Chinese central government. Beijing said it would retain veto power over candidates in future elections for Hong Kong's chief executive.

In the view of many Hong Kongers, that decision is a reversal of the promise China made ahead of the 1997 handover. At the time, Beijing said residents of the former British colony would have the right to directly elect their chief executive in the year 2017.

“Without any vote, we cannot simply change the ruler, and that's the problem," said 20-year-old protest organizer Joseph Li, a student in Chinese Studies at the Chinese University of Hong Kong.

Li said he was encouraged by the turnout at Monday's student rally, but he's not sure that pro-democracy campaigners are willing to engage in the kind of resistance necessary to change minds in Beijing.

Organizers behind the civil disobedience campaign, which calls itself the “Occupy Central with Peace and Love” movement, say they're adamant about standing up to Beijing. But they have also said they are sensitive to the concerns of those in Hong Kong who worry that demonstrations could hurt the business friendly territory.

Perhaps playing on those fears, Chinese President Xi Jinping met with Hong Kong business tycoons at the iconic Great Hall of the People in Beijing's Tiananmen Square on Monday. Xi said the central government's approach toward Hong Kong is supported by the public, both in Hong Kong and on the mainland, and that it promotes both prosperity and stability.

Government officials in China have also suggested that unspecified foreign forces are manipulating the pro-democracy movement in Hong Kong as a way to undermine stability.