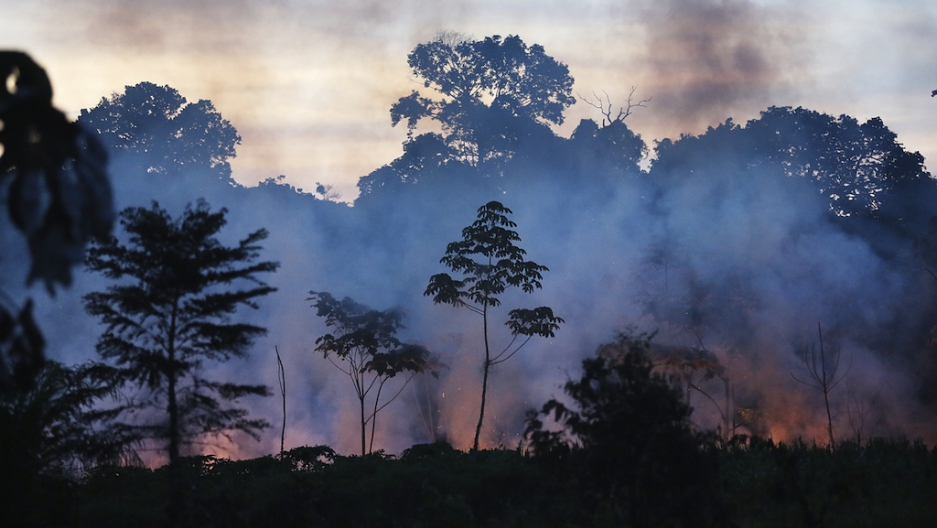 Fire burns in a deforested section along a highway through the Amazon lowlands in November 2013 in Madre de Dios region, Peru.
Credit: Mario Tama
Share

Editor's note: This story was originally published on Sept. 29. Check here for news from the climate change conference in Lima this week.

LIMA, Peru — Extremely vulnerable to global warming, Peru might seem like the ideal location to hold the next round of the United Nations’ climate talks.

The country’s mountain glaciers are melting at an alarming rate while parts of the vast Peruvian Amazon are already wilting, literally, as the mercury gently rises, potentially releasing billions of tons of carbon stored in the trees into the atmosphere.

No wonder the government here has been getting ready to roll out the red carpet for the estimated 12,000 participants in the Dec. 1-12 mega-conference known as the “COP,” shorthand for Conference of the Parties to the UN climate talks process.

It has approved 15,000 hotel rooms, is building a press center for 1,000 journalists, and has contracted French company GL Events, which has helped organize every soccer World Cup since 1998.

“The world will be watching us and we have to be at our best, both in logistics as well as in arguments in defense of the global climate situation,” Prime Minister Ana Jara said at one recent news conference.

Unfortunately for Peru, the hordes of delegates, green campaigners and reporters from around the world may also end up scrutinizing the country’s environmental record — and drawing some negative conclusions.

Lima has the worst air pollution of any Latin American city. An epidemic of illegal, highly polluting gold mining is ravaging the Amazon. And sustainability and ecological conservation are such low public priorities that the Environment Ministry here was only created in 2008 when the United States made that a condition of signing a trade treaty with Peru. Meanwhile, environmental activists here continue to pay with their lives. In the latest atrocity, indigenous leader Edwin Chota and three others were slain in a remote corner of the Amazon this month for their attempts to halt illegal logging on tribal lands.

More from GlobalPost: Latin America most dangerous place for environmentalists

Many of the country’s environmental problems are deep-rooted and predate the government of President Ollanta Humala, who took office in July 2011. Yet he has drawn green activists’ ire for the “paquetazo,” a package of economic reforms he signed into law on July 11.

Aimed at boosting growth by slashing red tape, the measures have been widely interpreted as rolling back a series of environmental safeguards.

That includes stripping the Environment Ministry of its powers to set air, soil and water quality standards as well as limits for toxic pollutants.

It also halves most environmental fines for the next three years, speeds up environmental reviews of new projects such as mines or oil drilling to just 30 days, and takes away the ministry’s authority to name nature reserves where no extractive industries may operate.

“The paquetazo is a serious step backwards and sends a terrible message,” said Jose de Echave, the former deputy environment minister. “The Environment Ministry was not a strong ministry to start with and it has now lost many of its powers.”

Julia Urrunaga, the Peru director of the Environmental Investigation Agency, a nonprofit conservation advocacy group, added that the package undermines Environment Minister Manuel Pulgar-Vidal as he readies for the biggest challenge of his three-decade career as an environmentalist, chairing the COP summit.

“The paquetazo complicates the situation for Peru as host of the COP,” she said. “We have a chairman, who is politically bruised in his own country and may not have the authority to take the necessary decisions.”

Some have even suggested that the reform could trigger protests from poor rural communities, including indigenous groups, angered by new mining, drilling or damming on their land — and a bloody police crackdown reminiscent of the Bagua massacre that occurred in 2009 and which Humala once appeared to condemn. The paquetazo’s measures have been so extreme that both the United Nations and Peru’s own official human rights agency have sent letters of objection to the Humala administration. The latter expressed its “great concern” at the reforms.

A delegation of US officials came to Peru this month specifically to discuss the reforms, which, environmental groups say, violate Article 18.3.2 of Peru’s free trade agreement with the US.

That article states: “The Parties recognize that it is inappropriate to encourage trade or investment by weakening or reducing the protections afforded in their respective environmental laws.”

Pulgar-Vidal, who previously headed the country’s leading green group, the Peruvian Society for Environmental Law, for 17 years, has a surprising answer when asked about the paquetazo. He flat-out denies that it hurts the environment or undermines his fledgling ministry.

“These measures haven’t weakened the Environmental Ministry one jot,” he told GlobalPost. “It hasn’t lost any powers or authority.”

Pulgar-Vidal also bridles at suggestions from many, including his former deputy, that he should have resigned rather than accept the paquetazo.

“The head of the firefighters never quits in the face of fires,” he said. “I’ve been working on environmental issues for 29 years, and I know that the process of strengthening environmental policy has never been easy.”

“I’ve seen tougher situations, when, in 1991, 40 articles from [Peru’s] environmental code, which had taken us 10 years to achieve, were repealed. But the environmental process continued getting stronger. It is part of a natural process in any country.”

Urrunaga suggests Pulgar-Vidal’s top priority right now may be surviving in his job long enough to see through the COP, for which he has been preparing for years, while also fighting for the environment from within the cabinet.

“It’s difficult to believe that either personally or professionally he agrees with the law,” she says.

Pulgar-Vidal, meanwhile, also acknowledges that hosting the COP may help focus debate within Peru on its own environmental needs. If the green campaigners are right about the paquetazo, then perhaps the COP can’t come quickly enough.

This article was originally published Sept. 21 under the headline “With its green cred under fire, Peru prepares to host UN climate talks.”