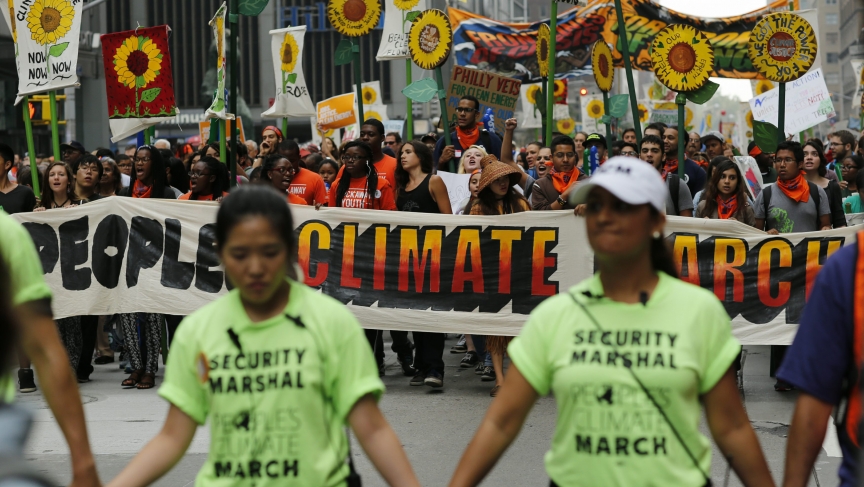 People take part in a march against climate change in New York September 21, 2014. An international day of action on climate change brought tens of thousands onto the streets of New York.
Credit:

Many tens of thousands of people flooded downtown New York City today for the People's Climate March. Similar demonstrations took place around the globe — all aimed at pushing for strong, international action to minimize the effects of climate change.

Today's marches were partly intended to influence a UN climate meeting on Tuesday, where world leaders will set the framework to negotiate a new international agreement on climate.

In 2015, nations will gather in Paris to formally commit, it is hoped, to taking strong actions against climate change. A Paris agreement would take effect in 2020 and commit countries to reduce their carbon emissions to some specified level by 2025 or 2030.

The Obama administration is now crafting its proposal for Paris, but politics in the US are making that tricky.

For now, the US remains bound by the UN climate treaty that the US Senate ratified in 1993. The Obama Administration is apparently poised to invoke that treaty as its authority to negotiate new limits.

That means the US could sign on to tighter emission controls without congressional action, says Alden Meyer, director of Strategy and Policy for the Union of Concerned Scientists. “My understanding is that [the administration] is working on a proposal that they will put forward early in 2015 to the rest of the world saying what we can do after 2020."

But it is uncertain how much President Obama can agree to on his own. “It depends on how the agreement is structured,” Meyer says. “If it’s an agreement under the existing Framework Treaty that was negotiated by the first President Bush in 1992 and ratified by the Senate, then [any further measures] would just be seen as implementing that current agreement.”

The advantage of this strategy is that the agreement would not have to be ratified by 67 members of the US Senate. “It's very difficult to envision 67 votes in the Senate for just about anything regarding an international treaty these days, much less something as controversial — at least within Republican circles — as climate change,” Meyer says.

The disadvantage, he notes, is that the agreement would continue to be voluntary and would lack any compliance measures or consequences for nations that fail to act. Many other countries find this non-binding, “souped-up voluntary commitment” approach hard to swallow.

“There’s been a lot of gnashing of teeth from some of the developing countries [and] from the Europeans, saying that we need something that is more binding than that,” Meyer explains. “But on the other hand, they all recognize the dilemma that the president faces.”

They also remember what happened with the Kyoto process in 1997, Meyer says — when the Clinton-Gore administration negotiated an international agreement and then didn’t have a strategy to get it passed by the Senate.

Experts are discussing different ways to structure a new agreement, he says, such as allowing the US to join it later or asking the US to agree to “some sort of enhanced reporting requirement that could give the agreement more teeth.”

At the end of the day, though, Meyer expects compliance will likely be left to nations, where governments “have the ability to hold the feet to the fire of polluters and compel them to do something about their emissions.”

The big issue in Paris, says Meyer, will be whether the US truly has a long-term commitment to reducing emissions and taking significant steps to mitigate the effects of climate change. Will nations believe that the next US president will be as committed as Obama on the climate issue?

Meyer says foreign leaders will wonder if a future Congress, within the timeframe of a new agreement, could implement an economy-wide cap on carbon emissions or put a price on carbon, as President Obama tried to do in his first term.

With all this in mind, the White House is keeping close to its vest the actual numbers that it plans to propose next year. Meyer believes the cuts must be deeper than the current target of 17% by 2020 if the US hopes to maintain credibility with its international negotiating partners.

To stay below the limits on temperature increase agreed to in Copenhagen five years ago — about 2 degrees Celsius or 3.5 degrees Fahrenheit — the US and other major emitting countries will have to go far beyond a 17% reduction, Meyer says.

The recent report from the Intergovernmental Panel on Climate Change pushed the world to move towards total decarbonization of the global economy to have “the best chance of avoiding the really catastrophic impacts of climate change,” Meyer says. Right now, we are not on a path to achieving that goal.

“So the question is, ‘How much can you do it in the next five years beyond 2020?' wonders Meyer. "We think they ought to get quite a bit further down the path: somewhere in the range of a 30-35% reduction.”

This story is based on an interview that aired on PRI's Living On Earth with Steve Curwood.