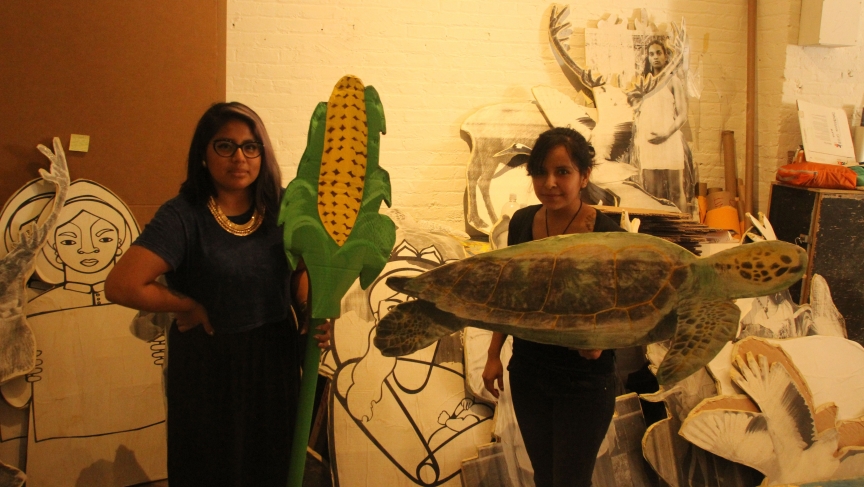 Sonia Guinansaca and Susana Garcia of the activist group CultureStrike will be carrying these images of crops and animals threatened by climate change in Sunday’s People’s Climate March in New York City.
Credit:

On Sunday, people from across the country and around the world will converge at a corner of Central Park in New York City.

They'll be taking part in the People’s Climate March, which organizers hope will be the biggest gathering in history to focus on global climate change. They want to grab the attention of the world leaders who are gathering in the city a few days later for a climate summit at the UN.

The organizers also hope those leaders will notice new faces among the marchers, including the faces of immigrants.

At an art space in North Brooklyn, Sonia Guinansaca and Susana Garcia are plastering images of a few of these faces onto cardboard to display in Sunday’s march. They’re with a group called CultureStrike, which focuses on art and immigrant activism.

Guinansaca, who is from Ecuador, says environmentalism comes naturally for immigrants like her. “Migrant communities, communities of color, have always been green — before green was cool,” she says.

Reducing, reusing, and recycling —  she says these are things they do culturally and out of necessity. But worrying about climate change is something new for many of the immigrants who’ll be at the head of Sunday’s march.

“It was really Typhoon Haiyan, that’s the first time we as a group mentioned climate change,” says Terri Nilliasca, who will be marching with the Filipino organization Damayan Migrant Workers Association. The group provides assistance to trafficked Filipino domestic workers. When the massive typhoon hit the Philippines last November, killing thousands and displacing millions, its members became climate change activists, too.

"All of us here were watching it helplessly,” she says. “Watching that happen ... made us really think this is something we need to be involved in."

And, of course, immigrant communities in and around New York have had reminders of climate change hit much closer to home. “[Hurricane] Sandy a couple years ago was a wakeup call for a lot of folks in the community,” says Ryan Chavez, a member of UPROSE, a climate justice group in the heavily immigrant Brookyln neighborhood of Sunset Park.

The area is right at the water's edge and suffered heavy flooding damage. So after Sandy hit the city, UPROSE started organizing blocks to respond to the next big storm and look for local ways to help slow climate change — things like green roofs and alternative energy. UPROSE is among a handful of groups that helped plan Sunday’s march.

Other immigrants who will be marching Sunday offer a whole different way of thinking about our relationship to the Earth. “We consider Mother Earth as goddess,” says Dr. Uma Mysorekar, President of the Hindu Temple Society of North America, in Flushing, Queens.

“First thing in the morning, when we all get up, we touch our hands to the floor ... that is Earth — and we ask for forgiveness that we put our feet on her," Mysorekar says. "And at the end of the day, we thank her for having taken us through this and bearing our weight and giving us what we need.”

In a way, it’s about making the climate change message about people, not just about the weather.

Of course, the two are intimately linked, and immigrants will be in the eye of the storms ahead. The International Organization for Migration has estimated that environmental changes could force up to a billion people to migrate in the next 40 years.

That could turn still more immigrants into climate activists, just as it did for Sonia Guinansaca. She says her family left Ecuador because their crops were failing.

“They decided to come here to New York to make a living,” Guinansaca says. "And as someone who’s undocumented, the idea of home and taking care of the planet is something that’s really close for me, because everything is home for me.”