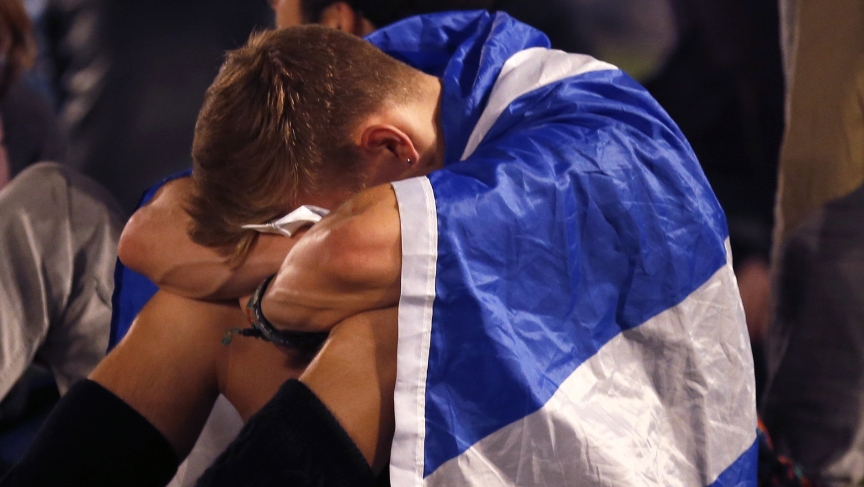 A supporter from the "Yes" Campaign cries into his knees as he watches election results in Glasgow's George Square. The "Yes" campaign's bid to win independence for Scotland failed by a 55-45 margin.
Credit:

It's never fun to lose. And after Scotland rejected independence from the United Kingdom on Thursday by a 55-45 margin, the 1.6 million Scots who wanted independence are facing up to the clear denial of their cause.

“We had this one chance to become independent and the world was looking on,” a distraught "Yes" voter in Glasgow told the BBC. “I thought people power would win … but they won." The vote even led Scottish First Minister Alex Salmond, who leads the Scottish National Party and drove the effort for independence, to resign on Friday after urging Scots to accept the "No" verdict.

Scottish comedian Hardeep Singh Kohli, a "Yes" voter, also took the loss hard. “I’m tempted to use the cliché of it being like a rollercoaster,” he says. “But on a rollercoaster you can at least get off. It feels like this journey is ongoing. And there’s no popcorn.”

Kohli believes the referendum isn’t a failure, but the start of something bigger. This referendum, he says, showed Scots the power of their votes.

Kohli points out that Scots who never registered to vote until their 50s and 60s came out this time and participated. Turnout for the referendum reached almost 85 percent. “People have taken to voting, they have taken to politics in a way they’ve never done in Scotland for over half a century,” he says. “The people will be heard.”

He cautions that heads of the UK's main parties have to deliver on their promises during the campaign to give Scotland more power over its own affairs. Guy Lachapelle, a professor of political science at Concordia University in Montreal, thinks that conversation may be the best part of the "No" vote.

“I think it’s a win-win situation," says Lachapelle, who was in Scotland for the referendum as one of 222 international observers. People in his home province, Quebec, followed the referendum closely thanks to their own history with independence movements. "I think now we can talk about the real questions about devolution of power, about all the promises made by Westminster. They are now entering into a process that will actually be quite fascinating just to see how they can adapt their institutions."

Scots aren't the only ones who are unhappy with the United Kingdom's constitutional setup. Just as London promised Scotland expanded self-rule, other parts of the UK want a piece of the action, as well.

“The 'No' vote has altered the dynamics of the relationship between the states within the United Kingdom,” says Michael Geary, assistant professor at the University of Maastricht in the Netherlands. “[That's] largely because of what has been promised by London in the last week of the campaign.”

He says Britain's main political parties were frightened by opinion polls leading up to the vote that indicated a possible win for the "Yes" camp. Those results “caught these politicians on the hop,” says Geary, forcing them to promise greater devolution of powers in return for Scottish voters rejecting independence.

UK Prime Minister David Cameron has promised what he calls a "devolution revolution" and says he will act quickly. But first, politicians have to figure out what exactly that means.

“Devolution is interesting because not all elements of the United Kingdom may have the same powers," Geary says. "So Northern Ireland might have less competences than, say, Scotland.”

Geary thinks Cameron has been careful not to talk about a federal system like those in Germany or the United States. But the prime minister has promised Scotland the important power to raise taxes and control spending.

“If he does that, he may well have to offer the same thing to Wales, Northern Ireland and England," Geary points out. "So it’s a great phrase, ‘devolution revolution,' but the devil will be in the detail, in terms of what will be decentralized.”

Geary says that Cameron and other British politicians may come to regret the promises they made to keep the union intact: "That was the price they paid to win. As a result, they have opened a Pandora’s box.”