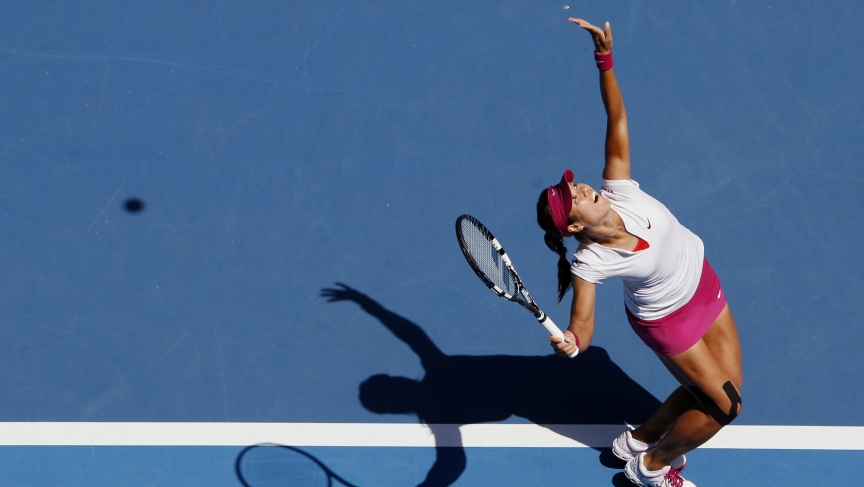 Li Na of China serves to Lucie Safarova of the Czech Republic during their women's singles match at the 2014 Australian Open.
Credit:

When Chinese tennis great Li Na announced her retirement Friday in a letter posted on social media, there was an immediate outpouring of support from around the world. It's no surprise why.

“She became the first Asian player, man or woman, to win a Grand Slam,” says Chris Chase, a writer for USA Today’s sports site, For The Win. “She won the 2011 French Open and backed it up again in 2014 to win the Australian Open. So she’s a two-time Grand Slam champion.”

But that’s not all. “She opened up the game to a new region in China and Asia,” Chase says. “And she was a trailblazer who broke free from the Chinese state-run sporting system and she went out on her own."

That certainly changed at least one aspect of her life: money. "There’s estimates that 65 percent of her earnings used to go right back to the Chinese government before she split," Chase explains. "Afterwards, it just became 12 percent. That set a trail for other Chinese athletes to do the same.”

In her note, Li said she’s retiring due to the knee issue that has plagued her throughout her career. She hasn’t played a match since a third-round defeat at Wimbledon in July.

But her legacy and her celebrity are sure to live on. In a list of the "15 reasons to be sad about the great Li Na hanging up her racket," Chase points out that more than 116 million Chinese people watched her French Open triumph in 2011. “I think 111 million people watched the last Super Bowl,” Chase adds.

“That’s even more impressive considering that China is not a hotbed of tennis,” he notes. “When Li Na was growing up, there weren’t tennis courts in her hometown. Currently on the men’s tour, there are only six [Chinese] men in the top 1,000 of the ATP rankings ... This is not a country that has this deep tennis tradition.”

But since her first Grand Slam triumph, China has started hosting more tournaments on the world tour and boosting the profile of the sport.

Chase says he hopes Li Na, despite her retirement, remains a strong presence in the world of women’s tennis: “I hope that she sticks around the game, whether it's announcing or attending events, because she really is great for the sport.”