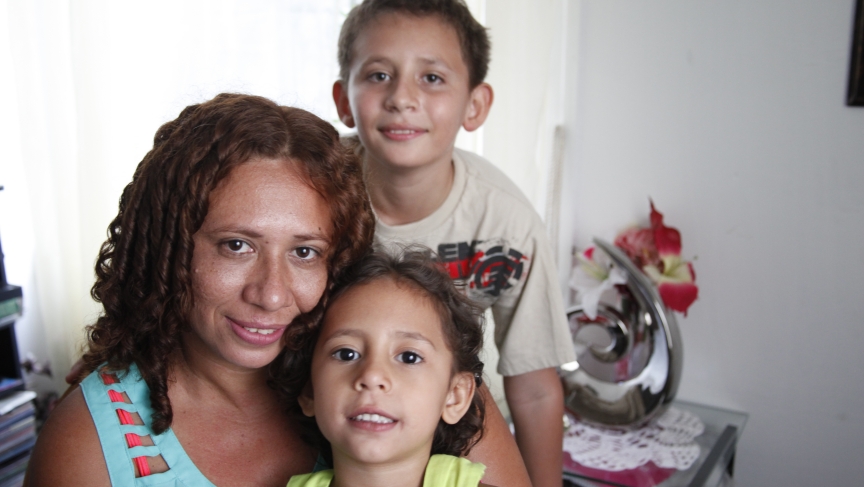 Four-year-old Michelle shuffles through her "homework" and shows off her coloring. She has been in the US for only two months, but already seems right at home here and in preschool. “I really like it, I like school,” she says.

Her mother, Kenia Bran, says life in Los Angeles is a big switch for Michelle and her 11-year-old brother, Marvin. They are safe now, out of Honduras. Their journey started after Bran’s husband and her uncle witnessed a murder there.

Criminals, looking to silence any onlookers, killed Bran's uncle and then threatened her husband. Bran says he sought asylum in the US, but his request was repeatedly denied. Three months after he returned home, he was found murdered on the family’s front porch, shot 17 times.

“They killed my husband, then threatened us,” she says. “We had to leave.”

Now, after being smuggled north and getting detained at the US border temporarily, the family is in Los Angeles with Bran’s mother, who moved to the US years ago. Even as they try to find a way to stay in the US legally, one thing is clear: The kids need to be in school.

Debra Duardo, director of Health and Human Services at the Los Angeles Unified School District, says stories like Bran's are all too familiar in the city. Duardo has worked for the district for years, but has never encountered such a wave of students arriving with such violent pasts.

“In all the crises I’ve dealt with in this district — and as a social worker myself — I’ve never experienced such extreme disregard for human life and such violence,” she says.

Duardo estimates that roughly 1,000 new students from Central America — mostly from Honduras, Guatemala and El Salvador, where gangs sometimes control entire neighborhoods and towns — have enrolled in her district since school started in August.

It’s tough to get an exact count of the new Central American students who arrived alone or are with family and are in the process of gaining legal status. “We don’t ask, ‘Are you documented? Are you undocumented?’” Duardo says. “Wherever you come from, our goal as a district is to educate any child of school age that comes to us.”

Duardo says the sheer number of new students is one challenge, but schools also have to deal with the language issues and emotional trauma that come with the new arrivals. “We’ve talked to middle school-aged girls who have talked about sexual violence, being pregnant,” she says. “I had a 13-year-old boy tell me he witnessed another boy his age being decapitated.”

Counselor Leticia López says problems often arise months after the start of the school year, after the initial excitement of living in a new country wears off. Some students suffer from recurring nightmares about their experiences at detention centers; others break into crying spells throughout the day.

It helps that the LA district is already accustomed to receiving immigrant students from around the world. It already has a multilingual counseling center for students and parents.

Michelle, the preschooler, and her older brother, Marvin, don't yet show signs of trauma from the violence they lived through. Marvin says what's tough about living in the US is that "I don’t understand anything.” English is new and that makes school hard.

His mom worries about how her kids are coping with their father's murder. She says she’s trying to keep things positive, giving them photographs of their dad smiling. She wants to stay strong in front of them, even though she collapses when she’s alone in her room.

It will be months before she knows if the family can all stay here legally. Meanwhile, Bran can’t work. She has to wear a black ankle bracelet that monitors her movements.

She says her children are the ones giving her strength, especially when she sees them with a fresh start. Marvin says he’s worried about his relatives back home. But when asked if he has any hope for the future, he immediately answers, “Yes, I do.”