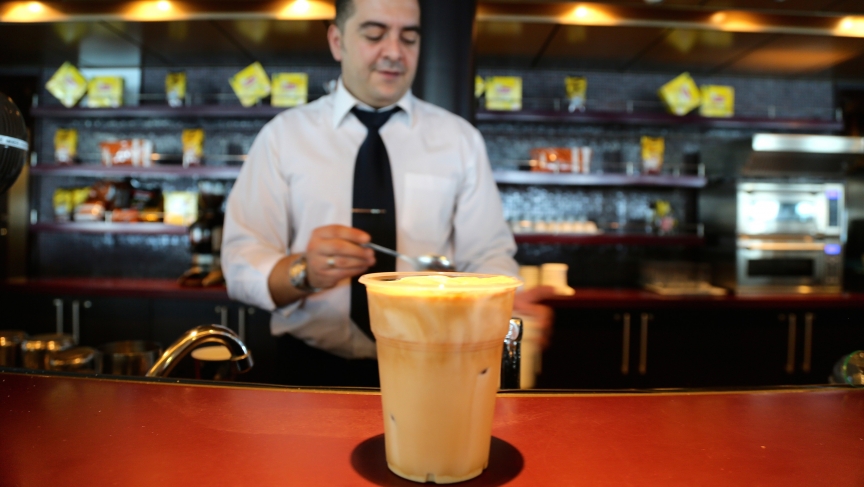 George makes about a hundred frappuccinos a day for the guests on board a Greek ferry docked in Tobruk, Libya.
Credit:

Fighting between rival militias in Libya has dragged the country back to the brink of a civil war, but one city has stayed quiet through the turmoil: Tobruk, near the Egyptian border.

That's where Libya’s newly elected parliament is trying to solve the crisis, but here the backroom politics are actually taking place on a boat.

Politicians sit at tables hammering out the shape of a new Libyan government, and others lounge on comfy couches and ignore their children as they make a racket on deck. There are a few foreigners around, too, generally press or security advisor types checking the place out for their clients

In other words, it's the ultimate place to network if you’re angling for a job with Libya’s new government. But surprisingly, it's also become a hotspot for the locals who come on board in the evening just for the heck of it.

“There’s absolutely no comparison between the ship and cafés in Tobruk,” one patron gushes. “Tobruk is a very small city compared to others in Libya. It doesn’t really have that many cafés, so this is an absolutely perfect place for people to meet up, to talk with their friends and socialize” — at least for those who have clearance. Security is tight and Libyan guards on the ship serve as bouncers.

But that also gives the place a sense of exclusivity, which is only heightened by the special beverage the Greek crew is concocting for the guests — frappuccinos.

The drink is all the rage on the ferry, and word has spread around town. First of all, you can’t get iced coffee anywhere else in Tobruk. And then there’s the fact that it's free on the boat. Libyan authorities are footing the bill for pretty much everything on board.

"I’ve tried frappucinos in Tripoli, but they don’t compare to these ones,” one guest says. “They’re really nice.”

One of the baristas, Andreas, says he makes more than a hundred frappuccinos a day. He jokes with the other Greek staffers that they could do with some ouzo on the rocks at the end of their 12-hour shifts, but there’s no booze on board — or anywhere in the country. The crew had to empty its stock before docking because Libya has a ban on alcohol.

A few other adjustments have been made. Shorts aren’t allowed — that’s another Libyan rule. But smoking is also banned, and that one, believe it or not, is a Greek rule.

Overall, though, everybody seems to get along — except when Libyans walk up to the Greeks behind the bar and order the wrong kind of coffee.

“Can I get a cup of Turkish coffee?,” one asks.

The crew says they’ve got no idea how long they’ll be marooned here in Tobruk. No one else — on or off the boat — seems to know either. But for the time being, Libyans are enjoying the ride even if they’re not going anywhere.