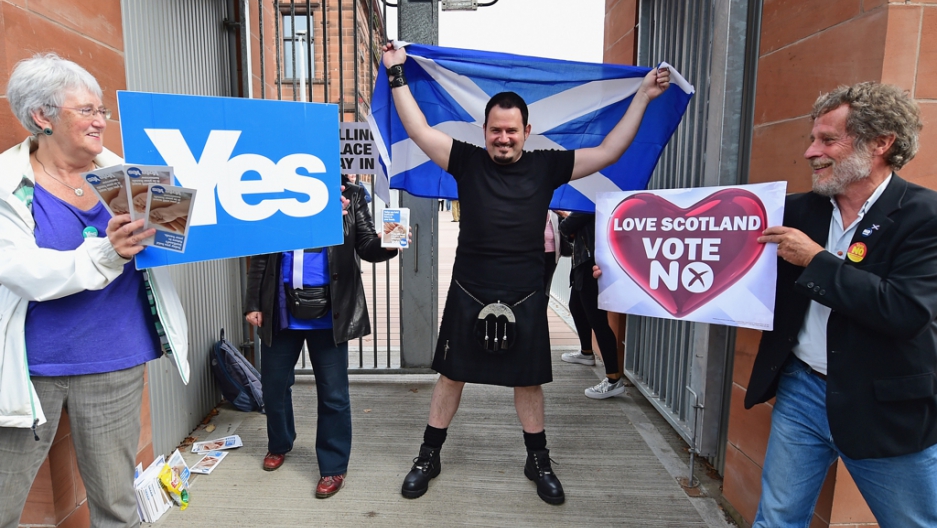 Follow the latest developments in the Scottish referendum on GlobalPost's live blog.

The people of Scotland — well, 55 percent of them — have voted to remain a part of the United Kingdom.

The majority are relieved not to have gained independence from Britain, a decision that would have ended a 307-year marriage. But don't forget the 45 percent who voted for it — and the 85 percent voter turnout — in a place where even 16-year-olds got to cast ballots.

So here are some of the words and phrases that might help you understand what everyone's saying.

Spoiler: there are a lot of words for "idiot" and "dirty."

Awa' n bile your head (Away and boil your head): Get lost

Baw: Testicle; the root of many general insults including "bawjaws," "bawbag," and "bawface"

Erse like a bag o' washin (Ass like a bag of laundry): A negative assessment of a woman's attractiveness

Face like a skelped erse (Face like a slapped ass): Describes a person's face that's red with rage or blushing

I wouldnae ride her in tae battle (I wouldn't ride her into battle): An negative assesment of a woman's attractiveness

Jobby: Feces, also used to refer to something as trash or junk

Mince: Rubbish, as in, "You're talking mince"

Yer bum's oot the windae (You're bum is out the window): You're talking nonsense, not making sense

Yer maw's git balls n yer da' loves it (Your mother has testicles and your father loves it): And example of a genre of insult involving accustations against a person's "maw" or "da"

If you'd like to hear how these sound when a Scot says them, watch this video.