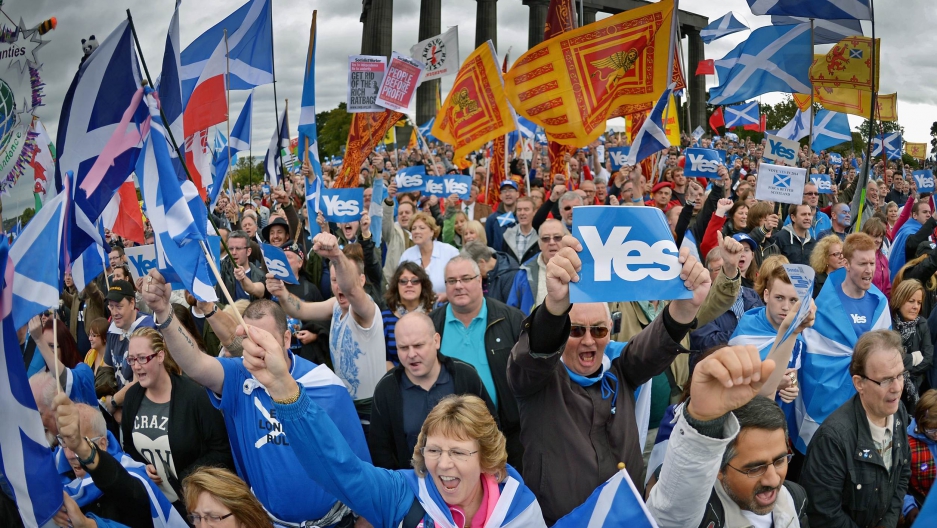 On Thursday, Scottish voters will head to the polls to decide whether Scotland should break from the United Kingdom and become an independent nation. Here in America, members of various separatist groups are closely watching the referendum and hoping it will boost other independence movements.

The Texas Nationalist Movement, which is described on its website as the "largest and oldest organization" pushing for the state of Texas to secede from the United States recently published a blog post wherein they expressed hope the Scottish referendum would lead to a "paradigm shift."

"Secession can be contagious. Look at what happened when the southern States of America began to break away. One by one, they followed. The same thing happened in the early 1990’s when the Soviet bloc fell," the post said.

Lynette Clark is the chair of the Alaskan Independence Party, which is dedicated to holding a "vote on secession" in that state. On Tuesday, Clark spoke with Business Insider and said her party has been watching the situation in Scotland.

"I think it's going to be a big surprise to the British Empire," said Clark. "I think they're going to vote yes."

Clark said she supports the independence movement and believes other members of her party share that view.

"The majority that I've talked to are in support of the independence vote for Scotland," Clark said. "It's about darn time. They have been under the thumb of the British rule for centuries and have received some pretty poor treatment."

However, though some of her associates are interested in the Scottish referendum, Clark said the vote hasn't necessarily sparked a larger conversation about independence in Alaska.

"Right now, we're at a point in time where our season is changing to go very, very cold shortly," explained Clark. "So, we're kind of paying attention to our environment right now."

Still, Clark, whose party has been criticized for alleged links to "outright white supremacists and far-right theocrats" said the independence vote in Scotland makes her more optimistic about the possibility Alaska could one day secede from the US.

"The destiny of Alaska is to be an independent nation," Clark said, later adding, "Alaskans have been working for their independence and less dependence for over 35 years. It's a drop in the bucket compared to what Scotland has had to endure, but more Alaskans are looking to see that fascism is alive and well in Washington DC."

South of Alaska, another independence movement is brewing. "Cascadia Now!" is a group dedicated to uniting the Canadian province of British Columbia along with "Washington, Oregon, parts of Idaho, southern Alaska and northern California" as an independence nation.

Adam Munson, the Cascadia Now! group coordinator in Seattle, told Business Insider his organization has been "following the situation in Scotland." He said he supports Scottish independence.

"I believe that every culture has the right to self governance and strongly support an independent Scotland," said Munson.

According to Munson, members of Cascadia Now! see similarities between the Scottish cause and their own.

"One of our biggest focuses thus far has been to highlight the cultural distinction that exists uniquely in Cascadia apart from the United States and Canada. Scotland has a long history apart from the UK and the Yes Scotland Campaign has done a great job of highlighting that," Munson said.

Munson added that Cascadia Now! can "learn from" the strategy employed by supporters who pushed for the independence referendum in Scotland.

"From early on in the campaign they also focused more on making it less about all the things the UK is doing wrong and more about how they can do it better, an idea that really resonated with us here," said Munson. "They have also been very effective at using the internet and social media as an organizing tool to rally grass roots support, something we are trying to emulate in our efforts."

Munson also said he believes more people may come to support Cascadia if Scotland breaks away from the US.

"I have always been optimistic that Cascadia will be a reality one day. It's just a matter of time. A common thing I hear when talking to people about the Cascadia movement is, 'it'll never happen.' I think that mindset comes from people never having seen anything like it actually work," Munson said. "That's the exciting thing about the situation in Scotland, if they are successful we'll be able to see first hand what that transition could potentially look like and the real effects it can have, both positive and negative."

On Thursday, when voters head to the polls in Scotland, Munson said he will be "checking results throughout the evening" though Cascadia Now! has no "official event planned at this time."

In Alaska, Clark said she may not be able to give the Scottish referendum her undivided attention on Thursday.

"What I'm going to be doing is what I do for a living and that's goal mining," said Clark. "I will, of course, check in on what news sources that I have available to me and keep an eye on it. I'm excited for it."

Business Insider: Forget the Hyperloop, Larry Page wants Google to build a super-efficient airport the rest of the world can copy

Business Insider: 21 geniuses just won $625,000 to spend however they want

Business Insider: E-commerce and the future of retail

Business Insider: Why the UK is so scared Scotland might split off