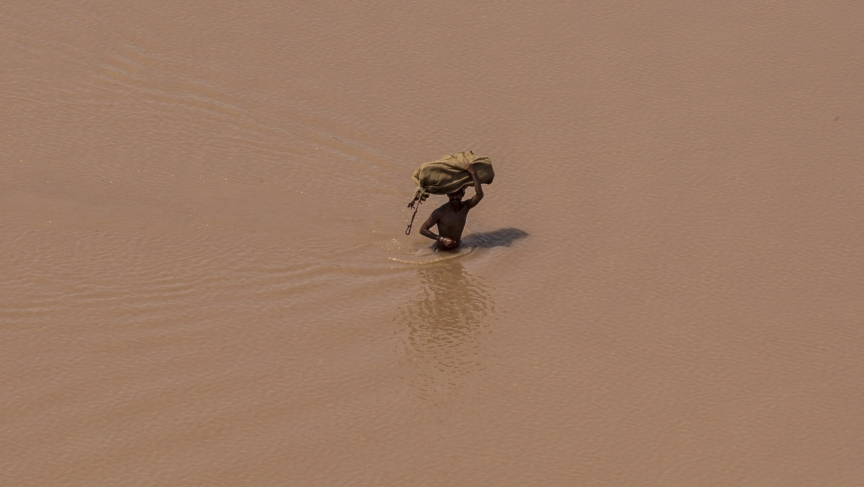 A man wades through a flooded field in Multan, Punjab province, September 12, 2014. Floods that have killed 450 people in India and Pakistan began to recede on Wednesday, giving rescue teams a chance to evacuate thousands of villagers in the heavily militarized and disputed region of Kashmir.
Credit:

People living in India and Pakistan are no strangers to heavy rains. Each year, the monsoon season brings downpours. But today, the Kashmir region is dealing with one of the worst floods in a century.

Over the past ten days, heavy rains have left more than 450 people dead and many are still missing. For author and journalist Basharat Peer, what's happening there is very personal. He grew up in Kashmir and his parents still live there.

As soon as he heard the news about the flood, he left New Delhi, where he lives today, to look for his parents. "My city was like an enormous trash can full of sad, grieving people," he says.

"My old neighborhood was under 20 feet of water," he adds. "The house I spent ten years in, you couldn't even see the roof. It was all gone."

Peer says the phone networks and Internet were down and that made getting news of residents there even more difficult.

The neighborhood Peer's family lived in wasn't significantly damaged, but he says his parents had to flee their home and sleep on the roof of a shopping mall.

Some have called it Kashmir's Katrina. And Kashmir residents are not happy with the government's response to the flood.

"It's in some ways the response that came from President Bush at that time," Peer says. "The head of the local government had a similar response, which was of utter failure."

Peer says there is normally a huge police presence in Kashmir, but after the recent flood, the biggest operation to help people came from civilians.

"You could see doctors, filmmakers, all becoming volunteer aid workers," he says.

In the end, Peer was able to find his family in safety. But many others are still searching for their loved ones.

Peer says his parents insisted on remaining in Kashmir. "Since 1990 we had a very long and brutal war in Kashmir ... They never left then and they would not leave now," he says.