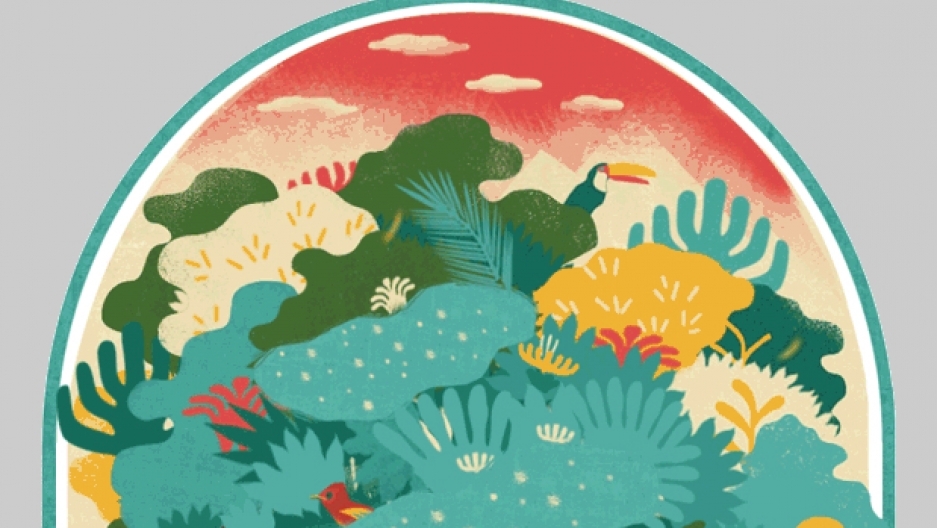 Graphic artist Rafael Varona used to think of illustrations, animation, and web graphics as distinct sections of his portfolio. Now the Berlin-based artist is combining these elements in a new series he calls Impossible Bottles.

The GIFs are a bit like a digital snow globes: miniature worlds in constant motion. In a jungle scene, treetops wave in the wind and a sloth swings gently on a yellow vine. In a lake scene, seaweed undulates in a dark pool while an endless rain falls from above. Rather than stopping and starting with the touch of a "play" button, the animations stream without a clear beginning or end, living independently on your screen.

See the GIFs below.

Varona's tableaux are made of bold, flat graphics, yet there are so many moving pieces that the longer you watch, the more elements you'll discover: ripe fruit falls to the jungle ground, clothes lie discarded in a heap by a pair of bikes. "I love detailed animations where you can experience nice little loops the more you look at them." Varona says. "Rather than tell a story with different scenes and characters, I prefer to have one character that is within a world compressed in a vessel and tells you a story with imagery."

So far Varona has only made two large scenes, but he says others are in the works. See more of his work here.