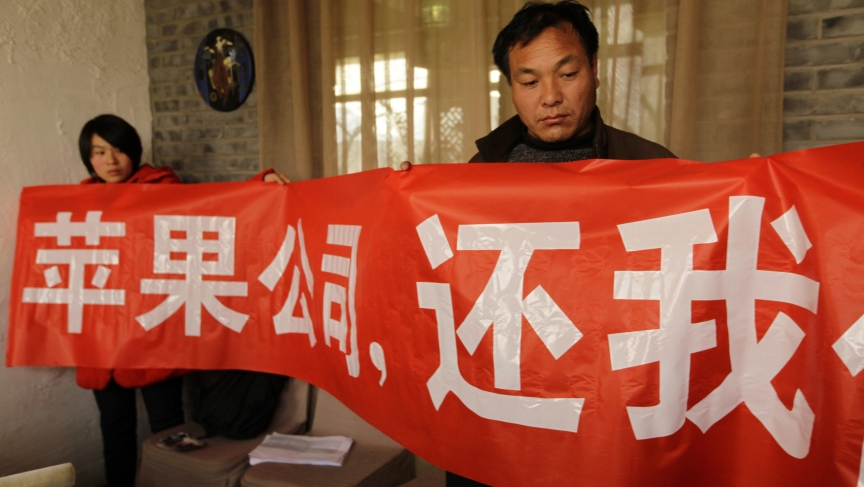 Shi Zengqiang, on the right, is the father of a 15-year-old worker at Chinese manufacturing company Pegatron who died of pneumonia. He holds a banner at a news conference in Beijing on December 16, 2013.
Credit:

In China, there are more than 200 million people working in hazardous environments. And in a country that produces more than half of the world's cell phones, many of them are doing that hazardous work in electronics factories, often making or assembling parts for the Apple products the rest of the world relies on.

The poor working conditions in these Chinese factories are the subject of a new documentary, "Who Pays the Price? The Human Cost of Cheap Electronics." The film follows the lives — and deaths — of workers, many of whom are teenagers, who fall gravely ill from contact with carcinogenic chemicals like benzene.

While the documentary is not yet complete, a nine-minute trailer has already caught the attention of more than a million people on YouTube, and perhaps even at Apple.

Earlier this year, whether in response to this trailer or the public outrage that's grown around this issue, Apple said it would begin banning the use of toxic chemicals like benzene in the assembly of iPhones and iPads.

Heather White, the film's director and producer and a human rights activist, says the film tells a deeper story about protecting workers' rights in China.

“When teenagers go into the factories, they’re going in as unskilled workers,” she says. “They’re often initially tasked with, basically, just wiping cell phone screens. That’s what a lot of the workers that I interviewed said that they had been doing.”

These teen workers usually use cleaning fluids that consist of several different chemicals. They're also normally unaware of the chemical makeup of these cleaning solutions, and receive no training on how to handle them.

“It’s only after they fall sick that they start to become suspicious about what the source of their illness might be,” White says. “They really have no idea that they’re working with a poison in most cases.”

In addition to carcinogenic chemicals like benzene, workers in Apple factories have also been exposed to chemicals like n-hexane, which can lead to nerve damage and even cause paralysis.

“There’s a group of 39 girls that I’ve been interviewing that have been in the hospital for two years because they became paralyzed as a result of being exposed to n-hexane for about three months,” White says. “Benzene accumulates over a longer period of time. But if you get leukemia [from it,] you have a good chance of dying.”

Chemically speaking, benzene is similar to gasoline and n-hexane is a neurotoxin. Until Apple banned these products in August, they were used solely for cleaning and had no other purpose in the company’s production cycle.

“All of the different experts and occupational health professionals that I’ve spoken with have said that [benzene is] absolutely not necessary and can be substituted out for other alternatives that are safer,” says White. “Of course, they might cost a little more, which is one of the reasons that many factories continue to use benzene.”

Many parents are concerned that their teens will take their own lives after they fall ill or are injured on the job. “Almost everyone I spoke to, especially the young men, said that when they received the diagnosis, or that when they woke up from their anesthesia and discovered that their right hand was missing after being smashed in a machine, that they were planning on committing suicide,” says White.

One of the individuals that White follows in her upcoming film did commit suicide in January, 2014 after receiving a terminal diagnosis. The problem goes beyond Apple facilities.

“While I was [in China,] I actually heard many cases in other factories where workers were committing suicide,” she says. “I think it’s a fairly widespread problem, either from the pressure or from finding out that they have a terminal diagnosis of something like Leukemia.”

In addition to the burden of a terminal illness, White says many of these young factory workers must also bear the financial hardships of their illnesses.

“When they get a diagnosis from the hospital, they’re also involved in a struggle for compensation from the factory,” she says. “The factory doesn’t want to pay for their medical expenses. So while they’re sick, they’re also fighting against the factory."

Apple declined to be interviewed on camera for White’s documentary, but she says they're aware of the ongoing problems at their facilities. “I sent them very specific information about the factories and the individuals who are involved,” she says.

White says correcting this issue can start with enforcement. “The Chinese government has laws on the books and they’re very good laws,” she says. “The factories know what the laws are, the regulations are very clear and they choose to ignore them because they know that there are not going to be penalties in most cases.”

This story is from an interview that aired on PRI's The Takeaway, a public radio program that invites you to be part of the American conversation.