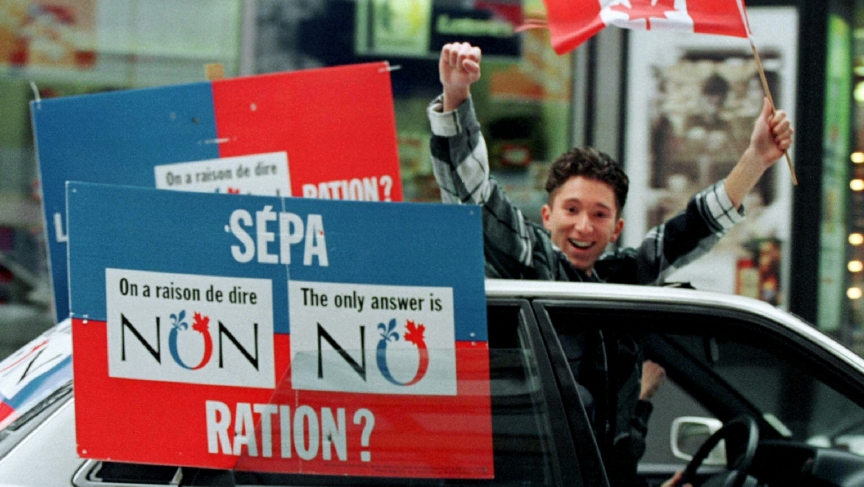 A "No" supporter yells from a moving car while taking his message through the streets of downtown Montreal during Quebec's 1995 referendum on secession from Canada.
Credit:

Canada has been in a difficult marriage for a long time, one that has nearly ended in divorce — twice.

The first time was in 1980 when Quebec’s premier, René Lévesque, called for a provincial referendum on pursuing a negotiated secession from Canada. The key issue for the separatists was the preservation of the French language and culture.

The proposal was defeated by a wide margin. But during his concession speech, Premier Lévesque made a promise to his supporters: “À la prochaine fois” — “Until next time."

That next time came on October 30, 1995, when the Quebec government held another independence referendum. It's been called "The Night Canada Stood Still." Quebec again voted against secession, but just barely. The final tally was 50.58% in favor of remaining part of Canada and 49.42% voting to separate.

As a nation, Canada came out bruised by the process. And economically, Quebec suffered.

“Montreal was the financial center of Canada [before the referenda]," said Reuven Brenner, an economics professor at Montreal's McGill University. "Then about 400,000 people moved out, and all the banks and so forth. This is how Toronto became the financial center for Canada."

Brenner points out that rents in Montreal dropped by 50 percent after the first referendum in 1980. Then, after the second referendum, businesses that had stuck it out the first time finally relocated.

So after two failed efforts and a faltering secession movement, have Quebec separatists thrown in the towel? Non.

“Obviously, in a democratic setting, you can try to become independent," says Daniel Turp, a constitutional law professor at the University of Montreal. He's also a retired politician who has represented the pro-secession Bloc Québécois and Parti Québécois.

In fact, Scottish separatists have studied the votes in Quebec to learn from mistakes made in 1980 and 1995. Quebec's referenda asked long, complicated questions, so Scots opted for a simple one: "Should Scotland be an independent country?"

Another big lesson for Scotland is preparation. The Scottish "Yes" campaign spent years formulating a strategy for independence. The Quebec votes were more rushed affairs.

And the biggest lesson Scottish separatists could learn from Quebec? Don't lose. Otherwise they could end up like Canada, in a place called "neverendum."