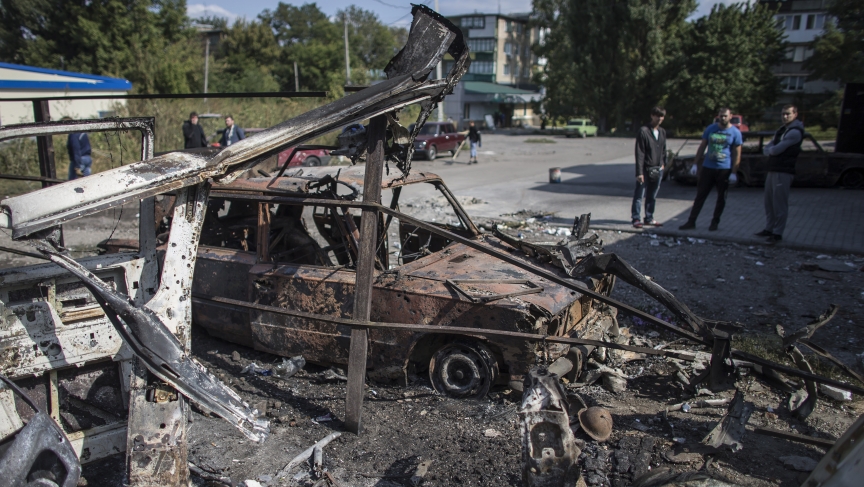 Burnt-out vehicles in an area that was recently shelled in Donetsk, eastern Ukraine. The ceasefire has been marred by shelling and shooting.
Credit:

The conflict in Ukraine took a couple of interesting turns on Tuesday — seemingly in opposite directions.

On the one hand, the Ukrainian parliament in Kiev finally approved a deal creating a close association with the European Union. That's the same deal that angered Russia last year and triggered the crisis in Ukraine in the first place.

But lawmakers also passed bills granting autonomy to areas of eastern Ukraine held by pro-Russian rebels and giving some of those rebels amnesty.

Carlotta Gall of the New York Times was in Donetsk, a key city in eastern Ukraine, early on Tuesday. She says everyone there is skeptical about what’s on offer.

She quoted one senior rebel leader as saying, "Look, we asked for this special status six months ago and nobody listened to us, and now it’s too late. We’ve moved on. We’ve had a lot of war and we’ve lost a lot of people. The people have suffered, so now we want independence."

Gall says the politicians in Kiev appear to have trouble appreciating how the east is different. “I don’t know how much they really understand," she says, "but when you live there, you really realize that so many people are closely tied with Russia.”

Those ties, she also notes, can even be physical. "In Donetsk, there were always three trains a day to Moscow — and only two to Kiev," she says. "People always see Moscow as a second home and a place to do business. It doesn’t mean they’re traitors or terrorists, it just means they’ve always looked that way. So you‘ve got to work with that.”

Meanwhile, a ceasefire between the Ukraine government and the rebels that started on September 5 is proving tenuous.

“We saw a terrible artillery strike right in the city of Donetsk just two days ago,” Gall says. “It hit a market and killed quite a few people, mostly pensioners going out to do some shopping. Somebody said to me, 'We don’t know what war will be like if this is a ceasefire.'"

While nobody is launching big ground offensives, Gall says, the shelling and shooting continue. “You hear multiple rocket launchers going off, night and day, out from the center of the city," she says. "So it doesn’t feel like a ceasefire a lot of the time.”

With all this in mind, she thinks it’s too soon to say the conflict is moving out of a military phase into a political one. “Certainly everyone in the east does not believe yet that peace is here," she says. "They all say it won’t last. There’s a great deal of pessimism there.”