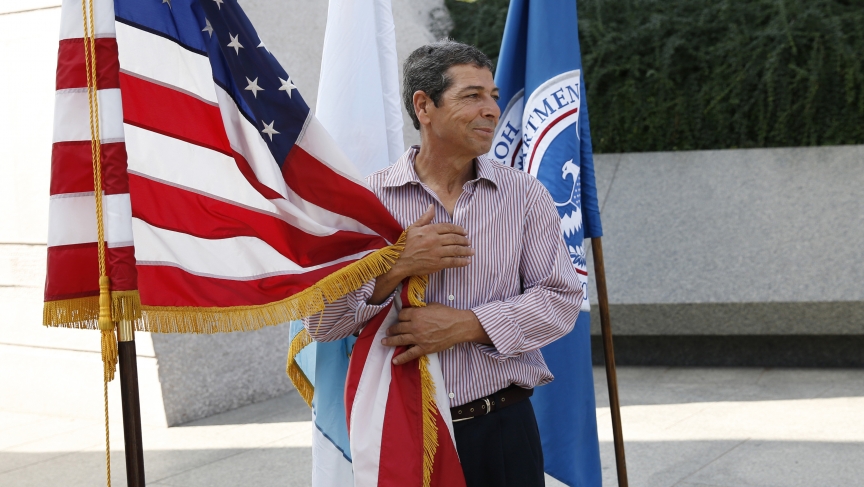 Brahim Djahra, from Algeria, clings to the American flag during a special naturalization ceremony held at the Martin Luther King Jr. Memorial in Washington on August 28, 2014.
Credit:

The American H4 visa might seem like a good deal since it allows immediate family members of those awarded an H visa for temporary work to reside in the US. But it's been dubbed the “golden cage”, the “depression visa” and the “prisoner visa” in various reports and comments.

Holders of the visa cannot obtain a Social Security number or legally find work, even though most of the spouses of H visa holders are professional women with valuable skills to contribute to the workforce.

But they are not only barred from jobs in the US, they also can't work remotely for a company back home or even freelance. Many H4 visa holders resort to continuing education, limited volunteering or illegal freelance work — a minimal use of their skills.

That has led Shah Peerally, a lawyer in California, to start a petition demanding that the US government allow H4 holders more rights. He's also working on a movie to educate the general public about the "curse" of the H4 visa.

A Facebook page titled “H4 visa, a curse” has more than 5,000 likes, and an accompanying blog details experiences of H4 visa holders and highlights the depression, frustration and, sometimes, familial abuse attached to a visa that restricts employment. It's especially trying for immigrants who have no social support system in a new country. A woman named Shilpa wrote about the hardship:

I have masters degree and 3 year of work experience from my home country, all in waste. By the time I will get my work permit I will be 45 year old and there will be more than 10 year of career gap in my resume. Which employer will like to hire with this huge career gap. 2) To live in America and afford the daily expense with kids is very hard and that is why we are not able to buy a house. 3) H4 visa woman are abused, one of my friends Mother was abused very badly. All because she did not have any identity card, no money, nowhere to go. These abuse cases go unreported because h4 dependents don’t have an identity.

Elsewhere on the Internet, Jaspreet writes in an open letter to President Obama:

We were both from top institutes back in India, there was a time when I had a great career, making more money than my husband, but I came to the US to support my husband's career … ppl who have been here since there education and paid taxes for yrs are the ones most affected. The sad part is, even if you grant us a small favor and authorize work, what will the wives do after a gap of 7 yrs in their career?

Now, help may finally be on the way. Recognizing the value that immigrants bring to the culture and economy, the Obama administration announced proposals in May allowing a subset of H4 visa holders to work in the US. The number of qualified candidates is currently around 100,000.

“These individuals are American families in waiting," explained Commerce Secretary Penny Pritzker. "Many tire of waiting for green cards and leave the country to work for our competition. The fact is, we have to do more to retain and attract world-class talent to the United States, and these regulations put us on a path to do that.”

As with any immigration reform, the proposal has been greeted by a mixture of triumph and fear. Individuals have posted positive and negative comments on the site Regulations.gov, where the public can track and comment on federal rulemaking. The proposal received 12,922 comments before the commenting period closed on July 11.

This proposed rule change does NOT help American workers who are indeed skilled and unable to find work. Why does this Administration continue to put up roadblocks to hurt the American worker? Further, why does this Administration continue to bypass congress when it comes to immigration? There are way too many immigrants (legal and illegal) here in the US now. Our country cannot continue to absorb these excess workers/people. This is such a bad idea.

Vivek Pandey, however, disagrees that the law will divert jobs from citizens:

My wife has years of very high quality work experience and can easily find employment were this rule in effect. Please bear in mind that this rule does not in any way promote the ‘low cost’ worker rhetoric that has become rampant. The kind of job that my wife and many other spouses on H4 visa compete for require a very high level of expertise and experience.

It is unclear how long it will take for work permits to be issued to dependent visa holders. But many see the proposal as a step forward in fixing a system that handicaps prisoners of the “golden cage."

This story by Tejasvini Prasad was originally published by our partner Global Voices Online, a community of bloggers from around the world.