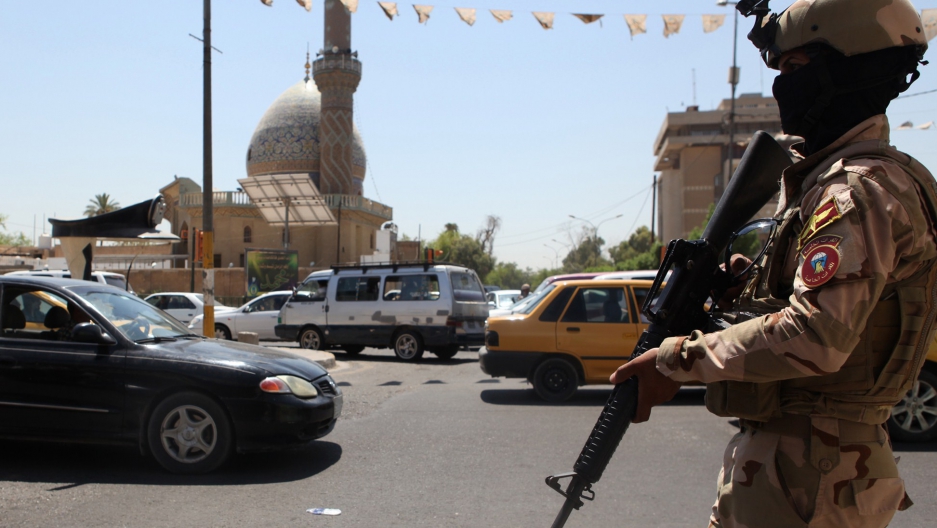 BAGHDAD, Iraq — It had been more than a year after her son was arrested when she took her friends’ and neighbors’ advice and called a lawyer.

Um Ahmed, as she asked to be called in this piece, said the man, specializing in counterterrorism law, promised that for a few hundred dollars he would be able to have the charges dropped and her son free within weeks.

It’s now been six months and the legal fees have ballooned to $4,000, wiping out the family’s savings.

Not only has the lawyer, whose name Um Ahmed declined to give for fear it would jeopardize her son’s ongoing case, been unable to arrange for her son’s release, but she says he hasn’t even been able to tell her where he is being held.

“We have no idea, no idea,” she explained, her voice both frantic and exhausted.

Sitting in the living room of her small home in the poor Baghdad suburb of Baya, she says she hardly hears from the lawyer. “He hasn’t told us anything except that my son has been charged with being with Al Qaeda.”

Um Ahmed’s son is just one of thousands of young men, mostly from Sunni neighborhoods, who have been rounded up and imprisoned on charges of terrorism since the implementation of Iraq’s counterterrorism law in 2005.

According to human rights organizations, many of the arrests are arbitrary. The men are almost all tortured, forced to confess to being “terrorists,” and charged based on those confessions.

Under Iraq’s purely confessionary-based legal system in which hard evidence plays little to no role, one such confession or witness testimony is all that is needed to secure a conviction.

The arrests, which often included prominent Sunni politicians, were just one component of former Iraqi Prime Minister Nouri Al Maliki’s rule that many Iraqis viewed as sectarian and divisive, eventually leading to his ouster.

Maliki’s opponents claim such policies were part of the Shia leader’s wider effort to squash potential political and military rivals.

During the US occupation of Iraq, thousands of men from the country’s Sunni communities were trained and armed as part of the so-called “awakening,” in which local Sunni groups fought against Al Qaeda and eventually helped deliver the country from years of bloody civil war.

But the Shia-led Iraqi government has since alienated Sunnis. Maliki’s crackdown on protests in Ramadi were even credited with sowing the seeds of the current Sunni militant takeover in the country’s north.

So far under the leadership of Iraq’s new Prime Minister Haider al-Abadi, residents and human rights groups report an ebb in alleged arbitrary detentions, but analysts suggest that could have more to do with general delays surrounding the changing of the guard in Baghdad than any lasting change in policy.

In Baghdad, the surge in incarcerations following the withdrawal of US forces created an opportunity for a small subset of Iraq’s legal establishment: terrorism lawyers.

One such Baghdad lawyer agreed to speak, but only by phone and on condition that he was simply referred to as Mr. Ali.

“It’s not up to me to get them out, it's up to the cases, to the evidence,” he explained, referring to the confessions that he admitted were often extracted under torture, a practice Mr. Ali described as physical and psychological “pressures.”

Mr. Ali explained that before Iraq’s counterterrorism law was implemented, he handled all kinds of cases: divorce, property disputes, criminal cases, but since 2005, almost all of his work has been related to terrorism.

Dodging a question about how often he’s able to get his clients out of prison, he explained: “If a person is guilty, not me, not even the one who writes the law can get them out.”

Mr. Ali admitted that he does take on the cases of people he believes to be guilty, “but it’s not by choice,” he said defending the practice: “the families, they insist.”

Even with these so-called “lost cases” as he calls them, he believes he’s doing the right thing by charging families money for his services, despite the fact that he believes his efforts are ultimately futile. “Whatever the person, they deserve a lawyer.”

Not everyone, however, sees the terrorism lawyers’ actions as ethical.

“These men, we don’t even consider them lawyers,” explained another Baghdad lawyer familiar with terrorism law specialists. “They don’t even practice law, they just rely on their connections.”

The Baghdad lawyer, who also spoke on condition of anonymity for fear that speaking out against this aspect of the Iraqi legal establishment could hurt his own practice, estimated that most lawyers who specialize in terrorism law are only able to get ten percent of their clients out of prison — yet charge $10,000 to $40,000 per case regardless of the outcome, fees much greater than what the average Iraqi family makes in a year.

“Most of these families, they don’t know much about the law,” he said referring to the relatives of those detained. “They believe that once a relative is in prison, he will be gone forever, so they’re willing to do anything.”

Since the fall of Mosul and Iraq’s ensuing political and security crisis, human rights groups and Sunni communities report the number of detentions have soared while court dates and other forms of due processes have been put on hold.

While a variety of factors have allowed for corruption to flourish in Iraq’s legal and law enforcement systems, including the lack of checks and balances, questionable standards for the requirements to practice law, and public ignorance, analysts and researchers say in this particular case, the root of the problem is in the way the country’s counterterrorism law was written.

“The problem is it’s extremely vague,” explains Zaid Al-Ali, an Iraqi legal scholar and former legal consultant to the UN in Baghdad. “Anyone can be arrested under the terrorism law and there is nothing in the law itself that guards against abuse.”

Al-Ali explains that despite other aspects of the Iraqi constitution that clearly call for due process for detainees and explicitly deem torture illegal, violations of these principles are frequent. The legal system, he says, is “decrepit and inefficient.”

Daniel Smith, a political and human rights researcher based in Iraq, agrees.

He says that while there are undoubtedly some lawyers taking advantage of a broken system to reap large personal profits, Iraq’s legal and law enforcement systems are both so rotten that if you go to prison, regardless of whether or not the lawyer working on your behalf is corrupt or honest, you will have to pay bribes to be released.

“There is no other way to get people out,” Smith explains. After spending years interviewing dozens of former detainees, he says as soon as families learn that a loved one has been arrested, their first course of action is to begin to raise as much cash as possible, as quickly as possible.

This money is then used to begin to pay bribes to find out where their loved one is being held, improve the terms of his or her detention, and then work on having the charges dropped. “The quicker you get money into the system, the better,” he says.

These lawyers, he explains, are a product of that system and some of them are merely helping families get the right bribes to the right people to move the process along.

But due to the arbitrary nature of Iraq’s courts, even large amounts of cash, personal connections and an effective lawyer can’t ensure that you’ll be able to get your loved one out of prison.

Um Ali, who’s continuing to pay legal fees despite no word of progress on her son’s case, says she doesn’t know if the thousands of dollars she’s already paid are helping or not, but she’s willing to take the chance.

“Sometimes I think the lawyer is a liar, and sometimes I think maybe he’s telling the truth,” she says. “He’s a very good lawyer, he must be, he knows many powerful people.”