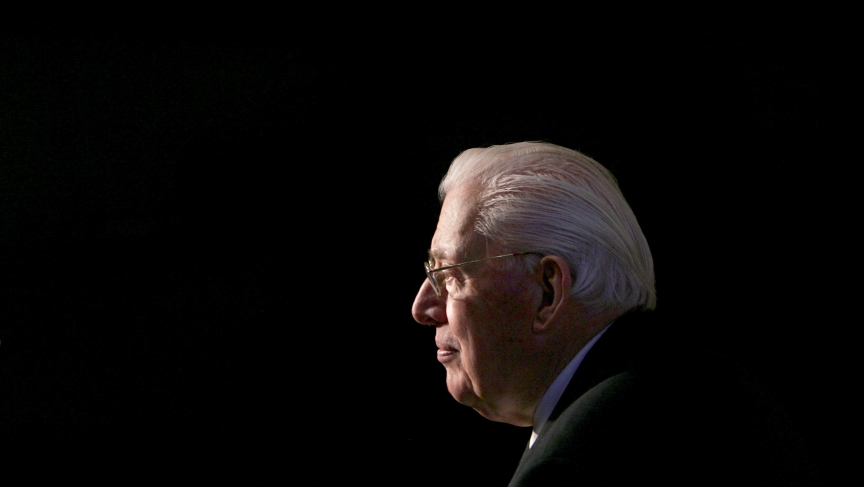 He was a man loved by many and loathed by many. The former first minister of Northern Ireland, the Reverend Ian Paisley, died on Friday at age 88.

Paisley was a firebrand known for his bellowing sermons and his staunch belief that Northern Ireland should remain part of the United Kingdom. He strongly opposed any concession to the Catholic nationalist community's desire for closer ties with the Irish Republic during what became known as Northern Ireland's "Troubles."

That even extended to a self-imposed exile from the Good Friday Agreement peace talks, the 1998 negotiations that provided for a power-sharing government between the Protestant and Catholic communities.

Rather than participate in the talks, Paisley announced he would travel to Cameroon to preach. Writer and film maker Jon Ronson asked Paisley if he could follow him to make a documentary about his trip to Africa and Paisley agreed.

“I remember, at one point, we turned up at a church in the middle of nowhere and they couldn’t get the power to work,” Ronson says. “Dr. Paisley borrowed our camera light to illuminate him. And he was standing in front of this church with this huge shadow coming from our little camera light and he really did look like Godzilla. And he was yelling, ‘Christ stands before you, with a nail-pierced hand. He’s knocking to get in. Will you let him in?’”

Throughout the trip, Ronson says Paisley made a number of anti-Semitic comments, directing many of his remarks towards the filmmaker himself: "He had three nicknames for me — one was ‘the Jew’, another one was ‘my Jewish friend’ and the third one was ‘my circumcised friend.'”

Despite the inappropriate comments, Ronson came away from the experience with a positive impression of Paisley.

“I kind of ended up liking him. I ended up having respect for him," he admits, remembering the reverend's honest piousness. "At one point, I remember we checked into this hotel and there was a painting of a topless woman on the wall. He didn’t know he was being watched and I saw him take the painting off the wall and put it in the wardrobe. And I’d see him reading his Bible and he’d make little notes all over his Bible. And I thought, 'Whatever you are, you’re not hypocritical.'”

Ronson wrote about his time with Reverend Ian Paisley in his book, Them: Adventures with Extremists. But despite that title, Ronson points out that Paisley became a man of peace in in his later years. In 2006, he agreed to share power with Sinn Féin, the anti-unionist political party he vowed for decades to smash.

But that change of position came at a cost, according to former Irish Prime Minister Bertie Ahern. “He paid a huge price for it politically," Ahern says. "He did not get the support of a huge amount of people that had been close to him for 40 or 50 years.”

“I remember our week in Cameroon as being a wonderful adventure,” Ronson says. “However, if you spoke to a Catholic growing up in Northern Ireland, in the 1970s, [Paisley] really instilled fear in a lot of people.”