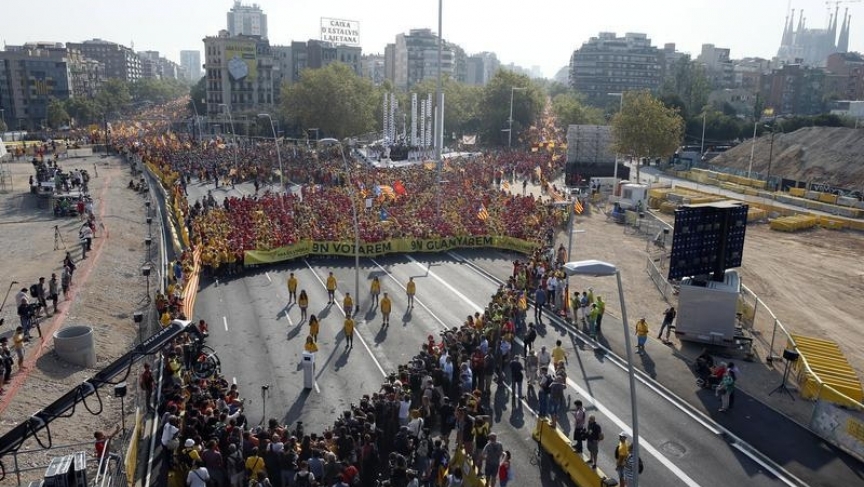 Thousands of Catalans thronged the streets of Barcelona on Thursday, September 11, 2014, to demand the right to vote on a split from Spain. Their ambitions have been boosted by an independence referendum scheduled for next week in Scotland.
Credit:

The world's attention is on Scotland's independence vote next week. But on Thursday, it was Catalonia's turn to talk independence. Hundreds of thousands of Catalan nationalists rallied in the streets of Barcelona calling for independence from Spain and celebrating their chance to put the issue to a vote in November.

Catalans will vote in an independence referendum on November 9 - two months after the Scottish vote. But unlike in the United Kingdom, Spain has no intention of listening to the result. Madrid says the entire vote, which is being organized by Catalonia's regional government, is illegal. Spain's prime minister has vowed that it won't even take place.

Catalan independence advocates are pushing back. The huge march formed a "V" in Barcelona to signify several things.

"In Catalan, ‘vincular’ means ‘binding’, because our referendum on November 9 is going to be binding, which is the important thing," insists independence activist Anna Arqué, who joined in the protest. "And that's really what it means, [but also] it's V for Victory and V for 'we will vote!'"

The "binding" part is a long shot: Only Spain's government has the authority to hold binding referendums — and they're obviously not on board. But many Catalans say any vote for independence would amount to a politically-binding result that would empower the Catalan government to negotiate secession with Spain and the EU.

Arqué says the issue of independence goes to the heart of what it means to be Catalan. "I'm Catalan because I'm part of this Mediterranean nation, which is Catalonia. We have our own language, our own history and traditions," she says. "I feel Catalan because I share all these values that my people, Catalans, live by."

Catalan culture and language was repressed under former Spanish dictator Francisco Franco, but Arqué says the independence vote isn't a process against Spain as much as "it's just a process for, and in favor of, Catalonia and democracy."

She says, "We don't need any Spaniards to talk for us in the international community. Like Portuguese to French, like Italians to Finnish, like Spanish to Catalans, we are all different nations. All we want is to manage our own political and social issues and policies. That's all."

Arqué describes Thursday's protest as "the positive message to the world saying that on November 9, finally Catalans will vote ... and show that we are a majority that wants independence. We are sure we are."