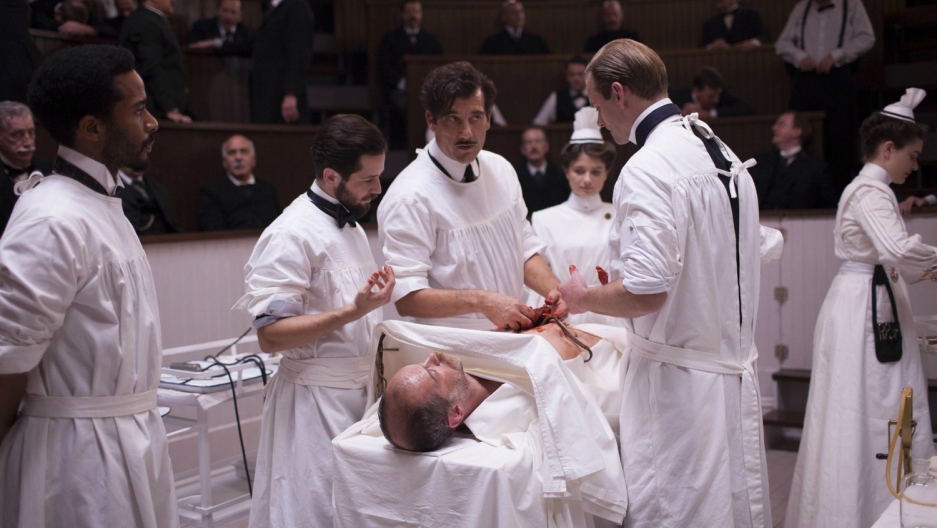 Last fall, "retired" filmmaker Steven Soderbergh filled the streets of Manhattan's Lower East Side with dirt and horse-drawn buggies, for a period drama for Cinemax. ButThe Knick is no Downton Abbey. Where that popular British drama opens with a lush musical score, The Knick jolts you with electronica by Cliff Martinez. The pulsating beats tell you that times are changing, without much exposition. Electricity is the new source of power shaking up the old order. For the surgeons at The Knickerbocker Hospital, electricity is a powerful if unpredictable new tool. The light bulb is a major cinematic motif, featured in almost every frame. Soderbergh eschews the sepia tones that usually indicate olden days. His New York is layered in rich black shadows, punctuated by bright whites, making 1900 feel futuristic.

Like Downton Abbey, The Knick is all about class, but the distribution of wealth here feels more like an act of violence. Clive Owen's Dr. John Thackery holds the show's center. A legend in his own time --- brilliant, arrogant, charming, substance abusing --- Thack is a clear forerunner to Don Draper. His chief antagonist is Dr. Algernon Edwards (played by Andre Holland), an African-American doctor that Thackery is forced to hire to please the progressive wealthy patrons who keep the electricity flowing. At first, Edwards seems to be a purely noble character, but when his good will efforts backfire in Episode 3, he unleashes a shocking beating on an undeserving bar fly. Soderbergh keeps the camera focused on Edwards's misplaced rage and sadness in disorienting and surreal close ups:

In Episode 4, Thackery finally lets Edwards into the operating room, but only to advise the white surgeons. Halfway through the procedure, Edwards suddenly clams up and won't divulge how to save the patient until they hand him the scalpel. Once the patient is out of danger, a white surgeon clocks Edwards across the jaw. Thackery is furious. "Next time, kick the man!" he yells. A surgeon shouldn't endanger his hands.

The writers revel in bizarre historic details --- such as how early plastic surgery entailed sewing a woman's entire arm to her face in order to graft skin for a new nose, or that a favorite pastime in the Five Points neighborhood involved throwing a man into a pit with a bag of rats. Perhaps the show's big breakout character is Tom Cleary, the burly Irish ambulance driver played by American actor Chris Sullivan. Cleary is the hospital's heavy, whose main skill is fighting other ambulance drivers for the sick and wounded. If the patient turns out dead, well, corpses have their price too. But in last week's episode, the death of a Polish immigrant from a botched abortion touches Cleary's soul --- and he delivers asearing indictment of a city whose streets were not paved with gold.

Episode 5, "The Capture The Heat," airs tomorrow. Taking his cues from Matthew Weiner, Soderbergh teases next to nothing. But the trailers don't feel unsatisfying; they're disorienting little mysteries.