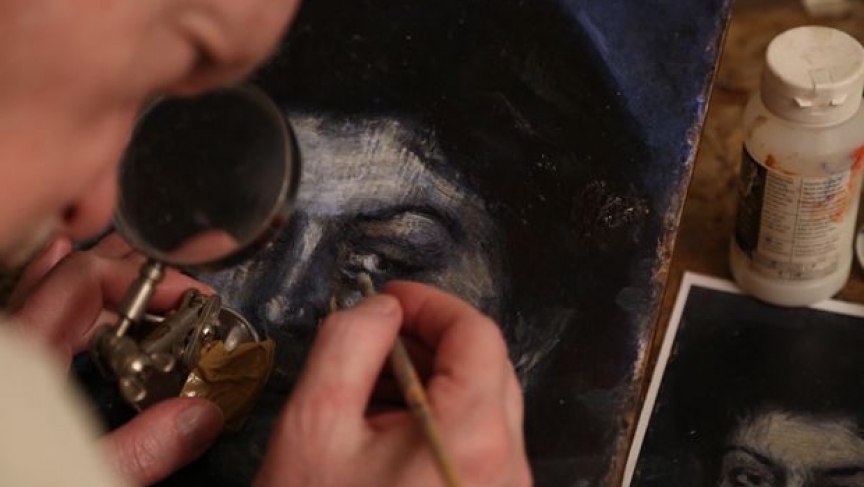 Mark Landis at work on a “Picasso." Landis forged paintings in many genres, using cheap materials, and donated them to dozens of museums.
Credit:

It’s one of the most curious forgery cases in art history: For almost thirty years, Mark Landis copied works of numerous artists, from lesser-known Impressionists to Picasso and even Walt Disney. But he didn’t try to sell his forgeries — he donated them.

Under a variety of fake names, Landis fooled museums all over the country into accepting his forgeries as gifts — 46 museums in 20 states, to be precise. But Landis has never accepted any money for his work and has never been prosecuted. “Mark Landis may be the most infamous and prolific art forger who has never committed a crime,” wrote Matthew Leininger, the registrar at the Oklahoma City Museum of Art, in his blog.

In 2008, Leininger was the first person who smelled a rat. He got suspicious about Landis’s donations and started an investigation that eventually exposed Landis as a fraud. Now, Landis and the unraveling of his 30-year con are the subject of a new documentary called Art and Craft, which comes out this month.

Sam Cullman, one of the directors of the film, says an article in the New York Times caught the eye of Jennifer Grausman, his filmmaking partner. At that point, Landis had “disappeared from view” and no one knew anything about him.

“The Times describe[d] him as ‘at large‘ — sort of playing up the dramatic aspect of him being this bad guy out there in the world,” Cullman says.

He and Grausman contacted registrar Matthew Leininger, who had been obsessively trying to track down Landis. Rumors swirled that Landis was ill, or even dangerous. Together, the group finally made contact with the forger.

When Cullman told Landis he was working on a documentary about his forgeries, Landis “spilled the beans” almost immediately. “Mark spent some time vetting us on the phone, but when we met [him] with camera in tow, he was incredibly forthcoming for a guy in his position," Cullman says. "He wanted to tell us everything, and he let us film him making the copies — and, pretty soon thereafter, giving them away.”

Why would Landis so readily cooperate with a project that would expose him as a fraud? “Like most things, there’s always a simple answer,” Landis himself responds. “I’m a lonely old shut-in. And I really appreciated having some chic young filmmakers from New York City come to spend some time with me and become friends to me.”

Landis grew up in Europe in the 1960s. His father was a naval officer in NATO and his parents liked to travel. They would all go to museums and bring home catalogs and information about the collections. “[Mother and Dad] liked to go out, and I’d be left alone in the hotel room,” Landis says. “They didn’t have TVs in the hotel rooms yet. But I did have the catalogs to go through. Like all kids, you know, you draw pictures. And I started copying pictures out of the catalogs.”

The first painting Landis "donated" was a copy of a work by Maynard Dixon, an artist well-known for his paintings of cowboys and Indians. It started as impulse, Landis says, but then "everybody was just so nice and treated me with respect and deference and friendship, things I was very unused to — I mean, actually not used to at all. And I got addicted to it.”

For the next twenty years, Landis pulled his con on one museum after another, seldom arousing suspicion. At first, he used his own name, but he began to fear that “gossip was getting around." He then switched to a collection of different aliases: Father Arthur Scott, Father James Brantley, Mark Lanois, Stephen Gardiner.

If a museum became suspicious, it was in their interest to keep it quiet. The worst that ever happened was that Landis would get what he calls a “stiff letter,” informing him that his donation was being removed from the collection.

Landis created his forgeries very quickly, usually in just a couple of hours, using cheap materials like felt-tip pens and dime-store frames purchased at Hobby Lobby and Walmart. “All that really counts is what it looks like,” Landis explains. “You know, when you go to a museum, you don’t put it under one of those giant microscopes that they have down in the basement.”

By the time Leininger became suspicious of Landis, the Internet age had dawned and it was easier to track forgeries. He looked up one of Landis’s donated works and found that Landis had donated copies of the same work to several institutions.

Landis claims to have been unaware, or at least unconcerned, that his actions might be illegal. “I guess I just didn’t really think about it much,” he says. “I mean, I’d have known that, if I was selling them ... I thought they’d just get mad and send stiff letters. And I’d be long gone by the time they got mad.”

Cullman also sees the forgeries as benign. “I don’t think there was malice in his actions,” he says. “When we first met him, he was genuinely upset to hear that he had caused people some anguish.”

Landis has twice had nervous breakdowns and has been diagnosed as schizophrenic or bipolar. But he dismisses the idea that what he did was caused by mental illness. “I never thought of it in that way,” he says. “And I don’t even know if any of that stuff’s wrong with me”.

A couple of years ago, Leininger organized an April Fool’s Day exhibit of Landis’s work along with the University of Cincinnati. Now, the documentary of his exploits is about to be released. Not a bad outcome for a serial art forger.

“A door of opportunity opens both ways,” Landis says. “I remember when I first found out I was in trouble, I was pretty down, because I was thinking, ‘Gee, what am I going to do? I can’t just sit around in my room watching TV the rest of my life.’”

Now, people have been asking him to paint their children and grandchildren, he says. Sometimes when people go on vacation in Europe, they come back and ask Landis to make paintings of works they’ve seen.

Is he still doing forgeries? “Oh, no,” Landis says. “Not unless somebody asks me to.”

Check out our slideshow of some of Landis's forgeries. This story is based on an interview that aired on PRI's Studio 360 with Kurt Andersen.