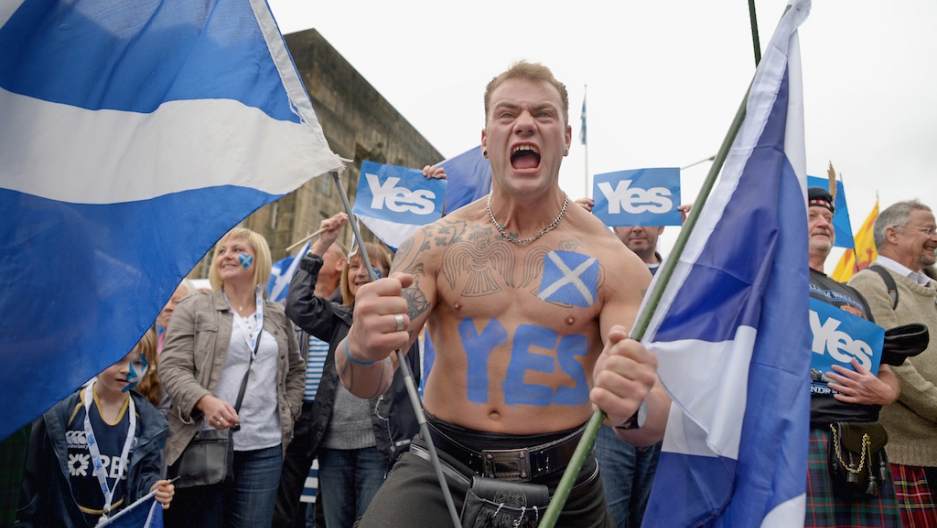 LONDON, UK — There once was a kingdom whose people lived together peacefully for more than 300 years, united by a common language, a shared monarch and a mutual love of tea and room-temperature ale.

Then the northern lands grew restive. They wanted to govern themselves. A referendum was set for Sept. 18 on a simple question: Should Scotland be an independent country?

For two years, the kingdom’s political leaders had treated their countrymen’s threats to leave as an amusing sideshow, as poll after poll showed the status quo in a comfortable lead.

And then one day — this past Sunday, actually — they woke to realize that it had all gone a bit tatties o’wer the side.

The most printable translation of that Scottish term is: we’re screwed.

In one week, Britain faces arguably the greatest constitutional question in its history, and the polls are too close to call.

For the first time since the referendum date was set in March 2013, a poll this past weekend showed the Yes (meaning, pro-independence) campaign with a 51 percent lead.

On Wednesday night, the union side was back in front with 53 percent, said Peter Kellner, president of the polling firm YouGov.

Next week’s vote really could go either way.

“At this stage, because I’ve been so startled over the events of the last four weeks, I’m really unable to say,” Kellner said.

For the scrappy, grassroots Yes camp, this sudden switch from underdog to frontrunner is a moment of elation.

“The amount of people who have actually gone from no to yes is incredible,” said Darren Carnegie, 25, a Glasgow salesman and Yes campaigner known for canvassing solely in a tartan G-string.

For the Better Together side — the pro-union network that includes the country’s main political parties — it’s time to panic.

Despite holding a 20-point lead as recently as a month ago, London’s political brahmins have bungled their case for solidarity to the point where a 307-year-old union could actually collapse on their watch.

If Scotland votes yes, the UK loses one-third of its land mass and 10 percent of its GDP in one go.

It is not an exaggeration to say that they are freaking out.

The government has promised Scotland more powers of self-governance if they stay in the union — but admit they won’t have time to iron out the details until November.

Despite pleas from the government, the Queen has refused to weigh in, with Buckingham Palace saying she’s “above politics.”

The leaders of the UK’s three main political parties deployed this week to Scotland to argue that Scots are better off in the union — without undermining their usual claims that life in the UK is intolerable under any party but their own.

Even an attempt to hoist the Scottish saltire up the flag pole at 10 Downing Street went embarrassingly badly.

Using the most emotional terms that British politicians will allow themselves, and acknowledging his and his Conservative party’s enormous unpopularity north of the border, Prime Minister David Cameron urged a hand-picked audience in Edinburgh not to vote yes just because “you’re fed up with the effing Tories.”

“I would be heartbroken if this family of nations was torn apart,” he said.

In a last-ditch attempt to save the union, the government has offered a home rule package known here as “devo max” — control of virtually all affairs but defense and foreign policy.

Ironically, this is exactly what most Scots originally wanted.

After the Scottish National Party’s victory in the 2011 regional election, First Minister Alex Salmond — along with a majority of his compatriots — argued that his homeland should be granted greater control of its taxes, oil and other affairs.

But Cameron wouldn’t allow a second question, about greater devolution, on the ballot.

At the time he may have thought he was calling Salmond’s bluff. He may come to regret that approach.

“But the difficulty for them is that so many people in Scotland will see this effort by Ed Miliband and David Cameron as too little too late.”

The Yes campaign is rapturous. Its energy, grassroots support and even its website evokes the electricity surrounding US President Barack Obama’s 2008 campaign.

Yes voters say the referendum is a once-in-a-lifetime opportunity to give Scotland the chance to elect governments that reflect the values of its voters, who tend to be more left-wing than the UK as a whole.

An independent Scotland would no longer have to send billions of pounds in oil money to government coffers in London, and could make its own decisions about how that money should be spent.

The unionists counter that what they lack in novelty, they make up for in practicality.

Scotland’s plan for economic independence is heavily dependent on North Sea oil, a commodity of vastly fluctuating price, and whose remaining supply no one is sure of.

Though Salmond has insisted that an independent Scotland could keep the pound, the Bank of England disagrees. Many economists have warned of the dangers of maintaining a fiscal union without a political one, citing the euro zone crisis as proof.

“I find it mind-boggling that Scotland would consider going down this path,” Nobel Prize-winning economist Paul Krugman wrote in The New York Times Monday.

Others find it mind-boggling that the unionists blew such a big lead.

“The Better Together campaign has been hopeless,” Kellner told an audience at London’s Foreign Press Association Thursday.

Rory Stewart, a half-Scottish, half-English MP for the border region, expressed his dismay as well.

“I have been absolutely convinced for the last three years that this was the biggest question in the last three, if not 300 years,” he said.

“The reality has been that until a week ago, the political culture in Britain didn’t have focus.”