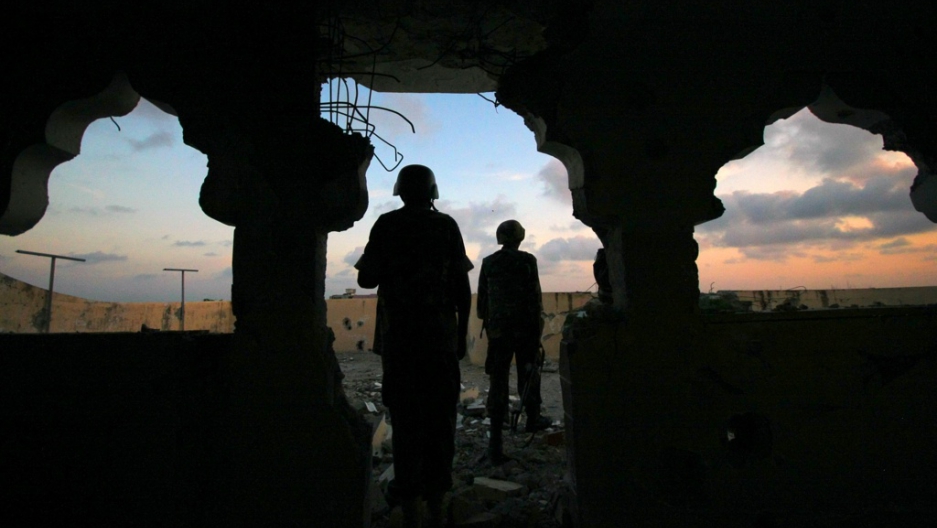 Uganda soldiers serving with the African Union Mission in Somalia (Amisom) 33rd Battalion are silhouetted against the Mogadishu skyline at sundown atop a partially destroyed building in the Yaaqshiid District of Mogadishu, where Amisom forces have pushed Al Shabaab militants beyond the city's northern fringes to the outskirts of the Somalia seaside capital. This picture was taken on November 22, 2011.
Credit: Stuart Price
Share

NAIROBI, Kenya — US President Barack Obama on Wednesday night announced an expanded campaign against Islamic State militants in Iraq and Syria, declaring the US “won’t hesitate” to extend airstrikes against the group inside Syrian borders.

“This is a core principle of my presidency: if you threaten America, you will find no safe haven,” Obama said.

Obama also announced increased support for moderate Syrian rebels fighting the terror group inside Syria, in the form of weapons and training.

The president says his plan to “eradicate” the Islamic State will be modeled on what the US has been doing for years in Somalia and Yemen. In his words, the “strategy of taking out terrorists who threaten us, while supporting partners on the front lines” has been successful in breaking down the groups and limiting violent attacks.

Let’s take a look at how the campaign in Somalia has worked, and what lessons it might hold for Syria and Iraq.

Obama on IS strategy: “It will not involve American combat troops fighting on foreign soil.”

This is technically true in Somalia, where deployed US forces aren’t filling combat roles. But the reality of their work means they’re intimately involved in ground campaigns against Al Shabaab terror targets. US Special Forces are deployed in Somalia and have been for years. In recent offensives they have traveled with African Union and Somali troops providing advice and support on the ground in battles against Al Shabaab, Al Qaeda’s Somali affiliate.

Obama on IS strategy: “This counterterrorism campaign will be waged through a steady, relentless effort to take out ISIL [the Islamic State] wherever they exist, using our air power…”

Targeted assassinations of Islamic extremists have worked in Somalia, killing Al Qaeda fighters with a far smaller number of civilian casualties and drone misfires than have been reported in Yemen or Pakistan.

The Bureau of Investigative Journalism tracks US covert war in Somalia, Yemen and Pakistan and reckons there have been as many as 20 US military strikes in Somalia since 2001 killing up to 173 people, among them perhaps 50 civilians.

Until 2007 most US operations in Somalia were surveillance and kidnapping in partnership with warlords on the US payroll.

Targeted US airstrikes began after that, initially in support of an Ethiopian invasion to oust an Islamic administration that had taken charge in Mogadishu, and then to assassinate individuals identified as threats to the US or to have been involved in the 1998 US embassy bombings in Kenya and Tanzania.

Not every raid is successful: US airstrikes missed Godane numerous times over the years, and in the wake of the 2013 Westgate mall attack in Nairobi a US Special Forces snatch operation failed to capture Ikrima, an al Qaeda plotter.

Obama on IS strategy, continued: “…and our support for partner forces on the ground.”

Alongside the assassinations and airstrikes, the US has long funded and trained proxies and allies in Somalia. The US switched its support from mercenary Somali clan warlords to foreign armies after the Islamic Courts Union — and its armed wing, Al Shabaab — swept to power in 2006. US officials say that around $700 million has been spent on training and equipping the now 22,000-strong African Union Mission in Somalia as well as parts of the Somali National Army.

Troops from Uganda, Burundi, Djibouti, Sierra Leone, Kenya and Ethiopia are all involved in the fight against Al Shabaab and all benefit from the support of US and European paymasters and trainers.

Al Shabaab is far from defeated. But the US strategy of targeted attacks on specific individuals, combined with financial and logistical support to allies sharing a common interest in defeating the group, has been an effective model. It’s little wonder Obama is seeking to replicate it in the fight against the Islamic State.

The big question will be whether a counterterror model based on close cooperation with a local government — as in Somalia and now in Iraq — can succeed inside Syria, where the Assad regime is terrorizing its own people and according to Obama “will never regain the legitimacy it has lost.”