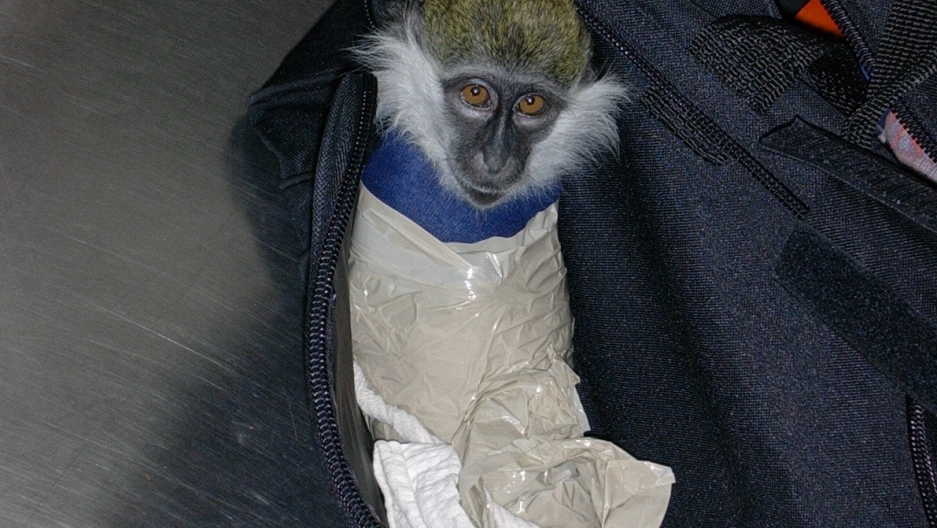 VILLENA, Spain — One terrified little monkey was found inside a tourist’s handbag during a routine airline carry-on luggage search, concealed with her tiny arms and legs strapped to her body with plastic.

Another two chimpanzees lived locked in a dingy basement for more than 10 years.

Today, these victims of Europe’s illegal wild animal trade amble happily around the shady enclosures of the Primadomus Spain primate rescue center, nestled in a small valley protected by low mountains that create a natural oasis of green in Spain’s hot and dusty southeast.

The unassuming 450-acre complex, built six years ago near the small city of Villena and home to more than 60 primates rescued from abuse and neglect, has become a key player in the fight to halt illegal animal trading through the Iberian Peninsula.

Separated from Morocco by only a narrow band of sea, Spain has emerged as the animal trafficking gateway to Europe from Africa, particularly through its busy southern port of Algeciras, near Gibraltar.

“Tourists see an animal in the markets, especially in Morocco, and feel pity for it, they want to save it,” she says. “Or perhaps they are African immigrants living in Europe and they want an exotic pet from home. So they smuggle it into Europe, often on the ferry to Spain. The second is Mafia types, who have realized that smuggling animals is easier and less risky than smuggling drugs or women.”

The illegal wildlife trade is booming globally. A 2012 World Wildlife Fund report estimates its worth at between $7.8 billion and $10 billion each year.

While the buying and selling of wildlife across borders has been regulated since 1973 by the Convention on International Trade in Endangered Species, the WWF found the current global approach is failing, “threatening the existence of some illegally traded species.”

That’s only too evident for the small, furry and soft-eyed Barbary macaque, Africa’s only surviving primate north of the Sahara. The monkey was added to the International Union for Conservation of Nature’s red list in 2008 after its population plunged by more than half over 30 years, amid widespread habitat destruction and illegal poaching.

A Barbary macaque and baby at a primate park in Algiers. (Fayez Nureldine/AFP/Getty Images)

An estimated 300 babies are stolen from their wild mothers each year and illegally sold in markets across Morocco and Algeria, often openly.

Many end up in Europe, caged in awful conditions. “Primates are not like dogs and cats,” Alzaga says. “They have the intelligence of a four- or five-year-old human child but they are five to eight times stronger than an adult human. They can break a bone with a bite.”

“They cannot cope in a domesticated environment,” she adds. “As they get older, they start to show their natural instincts to be strong and dominant to establish themselves in the group hierarchy, and they attack their ‘human group.’ The owner doesn’t know how to handle them, so they lock them into a small cage and leave them.”

Previously, a lack of facilities meant seized animals often stayed with their owners in appalling conditions, even as prosecution was underway. Spanish police are also training dogs to detect animals illegally trafficked into the Iberian Peninsula via ferry in a bid to stem the tide.

Primadomus Spain acts as a kind of halfway house, where abused and traumatized animals are slowly rehabilitated and re-socialized before being adopted, often by reputable zoos or wildlife parks.

Although animal care team leader Olga Bellon hopes to one day help boost dwindling Barbary macaque numbers by releasing rescued animals back into the wild, she admits much work is first needed from the Moroccan and Algerian governments to protect the endangered monkeys from poachers and habitat destruction.

“These animals often come from the wild, so if we can start the socialization process early, it could be possible [to release them],” she says, “but only if the governments are willing to work for the conservation of the species.”

This summer, the organization blanketed the bustling port of Algeciras with warnings about plummeting Barbary macaque populations in hopes of dissuading tourists tempted in Africa’s markets.

But the center knows success is a long way off.

More from GlobalPost: Animal traffickers use same routes from LatAm as drug smugglers

But watching as the center’s many chimps, apes and monkeys contentedly forage for fresh vegetables stashed each day around their spacious enclosures, she finds some comfort knowing that at least some illegal trafficking victims get the chance of a better life.

“Imagine you have been living for 10 years in a dark, smelly, humid and lonely place and suddenly you have company, trees, sunshine and you are free to walk around a large enclosure,” she says. “It’s not complete freedom but we’re glad to give them a good life in the end.”