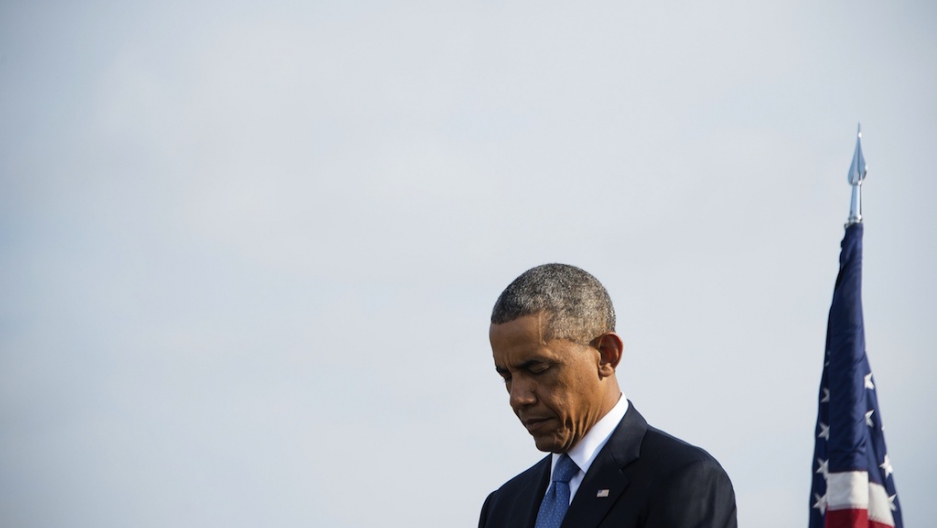 US President Barack Obama stands at the Pentagon in Washington, DC, September 11, 2014, for a moment of silence marking the 13th anniversary of the 9/11 attacks on the United States.
Credit: Jim Watson
Share

BOSTON — The 13 years of US-led fighting that defined the post-9/11 world in Afghanistan and Iraq, then in smaller campaigns in Yemen and Somalia, came to be known as The Long War.

On Wednesday night, the eve of the 13th anniversary of September 11, President Obama made it clear that The Long War is nowhere near over and indeed has opened a new front against the Islamic State.

Obama appealed to the emotion so many Americans feel in the wake of the beheading of two US journalists by IS. He stood alone in the White House and looked out to a country that had initially been skeptical of further US military action in Iraq and Syria, but which has come to support intervention. And he put America back on a war footing against an asymmetrical enemy in an ill-defined conflict.

Journalists and people around the world were outraged by the murders of freelance reporters Steven Sotloff and James Foley, who worked with GlobalPost, as a direct attack on what we as journalists do. It was a public execution of two American civilians who were willing to take risks to tell the stories of the people who suffer in war. So journalists, including myself, are as prone to the emotion of the moment as anyone else.

And beyond the emotion, there is logic. IS is a genuine threat to the people of Iraq and Syria and to the region. If its forces are permitted to take root in the area that it now controls, it will be a threat to the West. There is a solid argument for action now to confront IS head on.

But even with all of that emotion and all of that logic, it has to be said that Obama is stepping confidently and even convincingly into a minefield that will likely take years, not months, to navigate.

It is ancient terrain wired with explosive divisions that cut along ethnic lines in a part of the Middle East divided by Sunni and Shia mistrust as well as Kurdish aspirations for independence. These divisions cut across regional borders dating back to World War I that now seem to be in the process of being erased.

Lines in the sand are disappearing in the winds of war. The world is faced with the specter that the Middle East as we know it could quite literally be coming apart.

In announcing a sustained campaign to destroy IS, Obama has recast his legacy as a president who, rather than ending the US-led wars in Iraq and Afghanistan as he vowed six years ago. He has instead redefined the global struggle against terrorism as an endless campaign of smaller wars.

It is a legacy that he will likely be leaving for the next president, not unlike the legacy of a flawed military strategy he inherited from President George W. Bush.

Obama’s description of the 2003 invasion of Iraq as a “dumb war” will haunt him now that he has recommitted the US military to Iraq, with airstrikes and advisers plunging headlong into the vicious and opaque civil war in Syria without any articulation of what constitutes success.

During the nationally televised address Wednesday night, the president’s promise to carry out a sustained military campaign in Iraq and Syria to “degrade and ultimately destroy” IS had a hole in it that you could drive an armored Humvee through.

That is, he can’t claim to do whatever it takes to destroy the Islamic State and in the same breath rule out ground troops. That just won’t work, as Republicans in Congress and many independent analysts are saying, with an organization like IS that is metastasized into the population it controls.

My fear is that the president has set up his own failure in this conflict, or at a minimum doomed the people of America — as well as Iraq and Syria — to years of more fighting and all the suffering and financial burden that comes with it.

Obama sought to compare the stepped-up airstrikes and the training of the “moderate opposition” fighters in Syria to other counter-terror campaigns in Somalia and Yemen. But the targeted attacks in the Horn of Africa bear little resemblance to the sustained campaign that Obama is preparing to undertake in the swath of land that IS controls in a land mass about the size of Maryland that straddles Syria and Iraq. And the potential for a regional conflagration is far greater in the Middle East than it is in northern Africa.

Today the president looks out on an enormous diplomatic challenge in building the “broad coalition” he said would back his effort. Obama must contend with the shaky process of shoring up a new government in Iraq and standing up its fractured, weak army which will need to lead any military offensive on the ground. The planned effort to train Syrian moderates is no less perilous.

His pivotal speech and this historic moment for the Middle East opens a new chapter of uncertainty in a long book, perhaps even a full sequel to the story.

Call it The Long War II.

GlobalPost Co-founder Charles M. Sennott is the Executive Director of The GroundTruth Project, a non-profit organization that trains, mentors and provides resources to the next generation of correspondents to do work that can make a difference, and to do it safely.