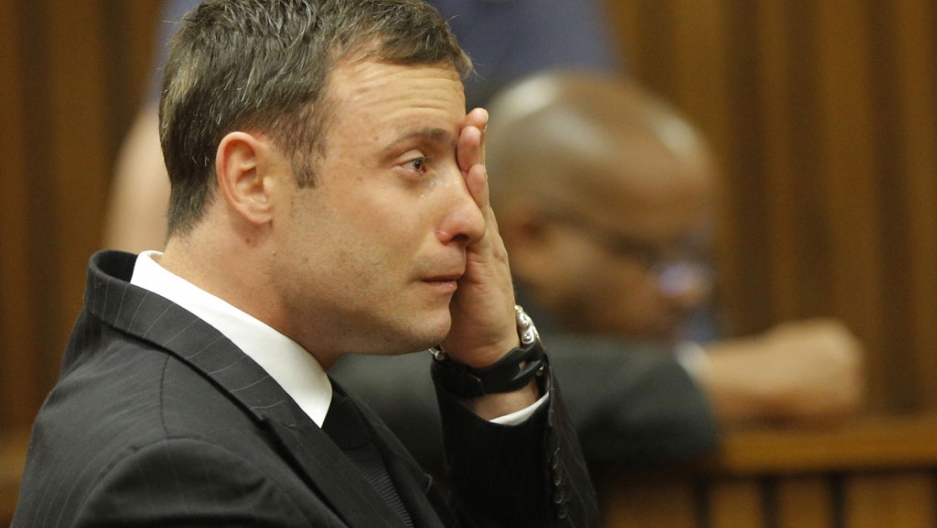 PRETORIA, South Africa — Oscar Pistorius is not guilty of murder. This much we know.

But in a cliffhanger at Pretoria’s High Court on Thursday, Judge Thokozile Masipa adjourned for the day just as it seemed she might rule on whether the Olympic double amputee sprinter is guilty of culpable homicide, a charge roughly equivalent to manslaughter.

On Friday she found Pistorius guilty of that lesser charge, which could lead to as many as 15 years in jail or as little as a suspended sentence.

Legal experts are already grumbling about Masipa’s decision to toss out the murder charge, and about her legal reasoning presented in court.

Pistorius was charged with murder after shooting dead his girlfriend Reeva Steenkamp in the early hours of Valentine’s Day 2013. He claimed he fired four bullets through a bathroom door at his home because he mistook her for an intruder.

Masipa, reading out her verdict in court on Thursday, rejected a charge of premeditated murder, dismissing the notion that Pistorius had a direct intention to kill Steenkamp — known as “dolus directus,” in Latin legal jargon.

She went on to dispense with the charge of murder, dismissing that Pistorius could have subjectively foreseen the consequences of his actions — known as “dolus eventualis.” In other words, the court had reasonable doubt as to whether Pistorius foresaw that firing through the toilet door would kill Steenkamp.

The confusing thing is what happened next. In discussing the charge of culpable homicide, Masipa said that Pistorius “acted too hastily,” “used excessive force” and was “negligent” when he fired through the door against a perceived burglar.

Masipa acknowledged Pistorius’ fear of crime — a theme throughout the defense’s case — but said that in South Africa many people are victims of violence, yet they do not sleep with a gun next to them. Instead of grabbing his firearm, he could have shouted for help or called police or private security at his estate, she said.

“I am not persuaded that a reasonable person in his circumstances would have fired four shots into that small toilet cubicle,” Masipa said.

In describing Pistorius as negligent, Masipa appears to be saying that he foresaw the consequences of firing shots through the door at a suspected intruder. This seems to contradict her earlier dismissal of “dolus eventualis.”

Masipa then adjourned court for the day — unexpectedly early. She finished delivering her verdict Friday, and will also rule on separate firearms-related charges faced by Pistorius.

Legal experts in South Africa immediately took to Twitter and local TV and radio stations to debate Masipa’s judgment thus far, many of them critical of her reasoning.

James Grant, a criminal law professor at Johannesburg’s University of the Witwatersrand, tweeted: “State can appeal legal errors. Arguably a legal error to restrict dolus eventualis to Reeva when it's irrelevant who was behind the door.”

“To my mind the judge did not engage with this issue in sufficient detail to explain convincingly why she found that Pistorius did not have the dolus eventualis to kill an unknown person behind the toilet door,” he wrote on his blog.

“She found that Pistorius did not foresee the killing. The question is whether the facts support such a finding.”

Steenkamp’s family showed little outward emotion as they sat through the first day of the verdict. However, some of her friends in court appeared upset over the dismissal of the murder charge, and confused by the sudden adjournment for the day.

“Just realized that I must have been sitting in the wrong courtroom on the wrong planet on days 1-41 as judgement day makes no sense!” tweeted Desi Myers, the mother of Steenkamp’s best friend.

Pistorius, meanwhile, still seemed stressed and distraught, sobbing almost uncontrollably through some parts of the judgment. As he prepared to leave court Thursday, he sat for a long time in the courtroom with sister Aimee, wiping away his tears and saying prayers.

There is no minimum sentence for culpable homicide, but a guilty verdict could carry jail time of up to 15 years — or as little as a suspended sentence. If Pistorius is found guilty, sentencing will take place at a later date.