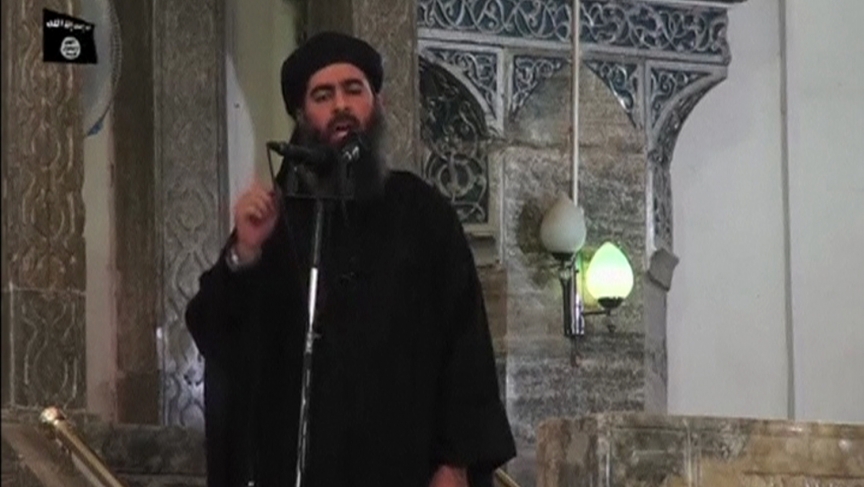 A man purported to be Abu Bakr al-Baghdadi, the leader of the miltant group ISIS, during what would have been his first public appearance at a mosque in Mosul, according to a video recording posted on the Internet.
Credit:

The terrorist group ISIS is known for its sophisticated social media outreach. Now it seems they are bringing that sophistication to their video propaganda, too.

ISIS, which also calls itself the Islamic State, recently created a new propaganda wing called the al-Hayat Media Center. We asked Elliot Greenebaum, a New York filmmaker who has worked on advertising and feature films, to look at some of the ISIS videos for us. He says they show a fair amount of skill.

“They're taking archival photographs and they're adding filters to them, and they're layering the photos so they look fragmented and highly active," Greenebaum says about a new two-minute music video celebtrating the "establishment" of the Islamic State. Those are techniques, he says, "that a Madison Avenue firm would try to deploy on behalf of a client."

(Editor's note: We are including examples of ISIS videos to inform our audience of their sophsitication, not to distribute their propaganda.)

Greenebaum guesses it took three or four days of post-production work to animate and add the filters and other effects. And these skills aren't ones you learn in a couple of hours, he notes. "The way that it's choreographed together suggests someone who's probably had a job doing this sort of thing, somewhere in a city with a film production economy."

Among the videos that have appeared in the past few months are “Mujatweets” — one-minute videos that show jihadists playing with kids, or shopkeepers talking about how good things are under ISIS rule.

In a report about al-Hayat — the new ISIS propaganda wing — the Washington-based Middle East Media Research Institute suggests one of the main people behind these new videos may be a German rapper-turned-jihadist who performed under the name Deso Dogg.

The videos are notable for their high production values and for their apparent target audience: Westerners. Aside from their style, the videos are translated into English and a number of European languages. A few of them feature English-speaking fighters.

Not only are the videos more sophisticated than ones produced by other Islamist groups, there are more of them and they come out faster.

“Al-Qaeda will issue a propaganda statement, what, once every month?” says Bill Roggio, the editor of The Long War Journal, a prominent national security-related website. “With the Islamic State, I saw the aftermath of the battle of Tabqa that gave them full control of a province in Syria — I saw that video two days after the battle."

That speed, he says, is "really stunning stuff when you think about it. The messaging that they’re getting across there — it’s the immediacy of the information.”

Of course, there's some dissonance when you watch these videos. ISIS says it abhors modern society and values. It wants to abide by the rules of Muhammad's 7th-century world. But ISIS videos have the sensibility and tech savvy of the present.

"It's actually surprising how contemporary and hip-looking some of these things are, especially considering the fact that the messages that they are promoting are essentially medieval," says Sean Heuston, a professor of English and film studies at The Citadel, who's written about extremist video propaganda.

That doesn't just apply to their music videos or slick infomercial-style clips. Heuston describes another ISIS video, this one jammed with violent, graphic scenes of killing that are rendered with the expert effects Elliot Greenebaum mentioned.

"We've got [the] aesthetic influence of action movies, adventure movies, thriller movies and even video games,” Heuston says. There's the action, without the moral weight. “You don't have focus on [the] human suffering involved in death, don't have emphasis on the fact that these victims are human beings [that] have family members [who] love them."

Greenebaum agrees the videos desensitize viewers to the violence, but thinks there might be something else behind the hyper-production: "I think they understand that control evokes power, which is the reason that so much control is exerted over the final product. Every inch of the material is polished almost obsessively. It is a kind of potency to be able to throw all of these high-end effects at video."

But while the bells and whistles show off some technical skill, Greenebaum says they may not actually make a great call to action: “It may not matter that the jihadists are throwing the kitchen sink at this media, because it could be that rock videos may not get that many people to sign up."