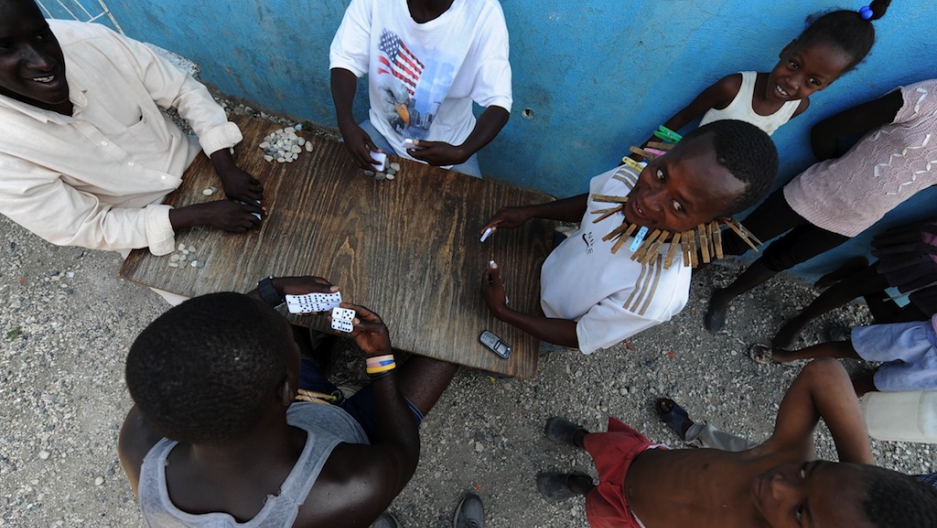 People play in a camp for survivors of the January 2010 quake in Haiti which killed 250,000 people, on February 28, 2013 in Port-au-Prince. The UN has in Haiti a huge mission of peacekeepers led by Brazil, helping the impoverished country with its political strife and the impact the devastating 2010 quake. Hundreds of thousands are still living rough in squalid makeshift camps, and they now face rampant crime, a cholera outbreak and the occasional hurricane.
Credit: VANDERLEI ALMEIDA
Share

But perhaps the biggest problem is created by one of the most basic human functions—defecation.
Cholera, though eliminated before the earthquake, has come roaring back and shows little sign of abating. This deadly disease is spread through contact with infected feces. Despite public awareness campaigns, thousands in cities like Cap Haitien and Port-au-Prince, are still using the “flying toilet” – a plastic bag – and spreading the disease from person to person, house to house.

United Nations Deputy Secretary General Jan Eliasson recently singled out sanitation as a “staggering” problem for as many as 2.5 billion people.

And yet, according to IRFC (International Federation of Red Cross and Red Crescent Societies), sanitation receives 27% of global funding far less than that given to clean water availability.

In Haiti only 29% of the ­population has access to any sanitation resources.

It’s hard to convince authorities that sanitation must be addressed ahead of more obvious needs like food security. So what is to be done? American ecologist Sasha Kramer is addressing sanitation and food security at the same time.

Kramer has lived and worked in Haiti off and on for over ten years, and she knows the problems facing Haiti well.

She and her team at SOIL (Sustainable Organic Integrated Livelihood) have distributed hundreds of composting toilets in areas most affected by cholera. Although building and distributing toilets is SOIL’S primary mission, they also collect human waste. Kramer wanted to figure out a use for the thousands of pounds of waste her toilets were producing. And so “the poopmobile” (as Kramer calls it) was born. It’s a green Subaru truck, with a flat-bed large enough to fit the 60 drums of waste (900 gallons worth) collected from the toilets on a weekly basis. The waste is then stirred with sugar-cane pulp and stored in large wooden silos for nine months. At the end of nine months, the compost is sent to a lab to test for pathogens. Scientific research has shown that treated human compost is no more dangerous than animal manure.

When we visited Haiti recently, Kramer took us on a tour of her experimental farm and shared stats she's gathered on the impact of SOIL’s fertilizer on crop yields. According to her numbers, $60,000 worth of spinach can be produced from a hectare of land treated with SOIL’s fertilizer versus $3000 worth in the same patch of land if left untreated. Looking over the test fields, the contrast could not be clearer between the lush crops of sorghum, banana trees and amaranth spinach on the plots treated with what Kramer calls “humanure” and neighboring control plots. For example, the banana trees in the untreated soil are stunted to chest-height, while those on the composted soil stand 20 foot high – even though both sets were planted at the same time.

When you see the results of SOIL’s fertilizing system and look over the eroded fields and hills of the rest of Haiti, you can’t but think (and hope) how this fertilizer could transform the landscape of Haiti. Deforestation and over-farming have rendered the top soil into little more than dust in most rural communities. The sight of teams of men breaking up this soil with picks is painful in its futility. In the days of French plantations, Haiti was the biggest agricultural producer in the world; now, it cannot even feed itself. More than 80 per cent of Haiti’s farms fail to produce enough food to feed household members let alone have surpluses. Haiti has one of the world's lowest rates of chemical fertilizer usage – less than one kilogram per hectare of arable land, compared with more than 100 kilograms per hectare in the U.S., according to World Bank estimates. With more than two-thirds of the Haitian population dependent on farming as the main source of income, investment in low cost fertilizer is essential to the economic improvement of the entire country.

For developing countries like Haiti, which can’t afford the billions of dollars of investment required to establish sewage systems or provide fertilizer subsidies, Kramer’s simple but effective system is a way to kill two birds with one stone. A fleet of “poopmobiles” would be the only major capital investment required for SOIL to transform both sanitation and food supply in Haiti.

Around the world, food and sanitation problems often go hand in hand. As Deputy Secretary General Eliasson makes his push for “toilets for all” ahead of World Toilet Day on Nov. 19, he should look to SOIL’s poopmobilies and Kramer’s low cost solution as an answer to Haiti’s needs.

Sara Fanning is an assistant professor of history at Texas Woman's University and the author of Caribbean Crossing: African Americans and the Haitian Emigration Movement. She is also a fellow in The OpEd Project’s Public Voices Fellowship at Texas Woman’s University. Her husband, Rob Curran, is a financial and travel writer whose work has been featured in the Wall Street Journal and Fortune.com among others.