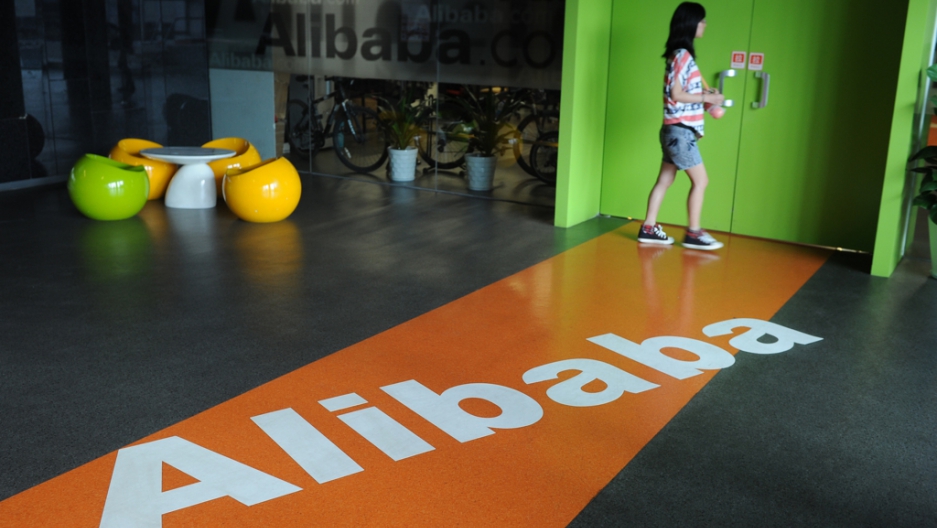 Update: Things are going crazy right now for Chinese e-commerce giant, Alibaba. Alibaba set the record yesterday for largest IPO by a US-listed company. Selling at $68 per share, it raised $21.8 billion. Today, it started trading publically on the New York Stock Exchange a little before 12 p.m. and investors went nuts. Shares opened at $92.70, which means a market cap of more than $230 billion. Where will it go from here? Follow along at Google Finance.

So you're gonna buy an Apple Watch, right?? You're definitely gonna get the iPhone 6 Plus, not the iPhone 6, uh, regular? Can't wait to swipe an Apple product at a checkout counter and magically give money away?

Well, if you live in China, there's a good chance you'll be purchasing those lovely new products via an e-commerce giant called Alibaba.

Alibaba Group Holding Ltd., a Chinese technology company founded in 1999 by a former English teacher in Hangzhou named Jack Ma, is about to become a household name, thanks to an initial public offering next week that's promising to break all kinds of finance records.

If things go as planned, the company's IPO will raise more than $20 billion dollars. That would put it comfortably over the $16 billion that set a tech IPO record for Facebook in 2012. Under some circumstances, the number could go as high as $24.3 billion, according to Reuters, which would give Alibaba the overall global IPO record, ahead of the Agricultural Bank of China's $22.1 billion listing in 2010. Reuters says Alibaba has already received enough orders in two days to cover the entire deal. With slickly produced pitches like this one, are you surprised?

We'll have to wait till next week to know how big Alibaba is, technically speaking. For now, let's meet the company that controls Chinese e-commerce and has its sights on the rest of the world.

So how does Alibaba work?

As we get closer to the Sept. 19 IPO, you'll hear a lot of people comparing Alibaba to Amazon. That's not a great comparison, and the Wall Street Journal explains why.

Here's the key thing to remember. Amazon sells products. Alibaba runs online marketplaces where retailers sell products. So it's kind of like eBay, but bigger, richer, and with much larger share of online commerce.

Alibaba has two main sites: Taobao and Tmall. Each is an online marketplace, but they host different kinds of retailers and earn money differently.

Taobao hosts 7 million retailers, most of them small businesses, which, combined, list 800 million products. Retailers don't pay a commission to sell on Taobao, but since there's so much competition for customers, many retailers try to set themselves apart by paying for advertising. That generates lots and lots of money for Alibaba.

Tmall is a smaller marketplace, but hosts major retailers, like Apple and Nike. Those brands pay Alibaba a deposit to sell on Tmall and pay a commission on each transaction.

So how big a deal is Alibaba, then?

The answer looks different depending on the financial measure you're using, but really, the answer is the same no matter what.

Alibaba is a huge, huge deal. WSJ has some telling info on just how huge.

Take market capitalization, or the total value of available shares times the value of a single share. Alibaba's market capitalization value is estimated at $155 billion. That number makes it look pretty small compared to the top three US tech giants: Apple ($593 billion), Google ($400 billion), and Microsoft ($378 Billion). But it compares nicely to Amazon, which also has a market cap in the $150-billion range. And it's growing.

There's also total transactions, revenue, and profits. Alibaba hosted $248 billion in transactions last year. That's more than Amazon and eBay managed to do — combined. And while Amazon takes home a lot more revenue than Alibaba from its fewer transactions, Alibaba takes a much higher net income from its revenue than Amazon. Alibaba now takes home 80 percent of its revenue as profit. In Q2 2014, for example, Amazon lost money while Alibaba raked in $2 billion in profits on $2.5 billion in revenue, compared to Google's $3.4 billion from $16 billion, and Apple's $10.2 billion from $45.6 billion. Not bad.

To really understand how big a deal Alibaba is you've got to understand the growth of China's e-commerce economy and the stronghold that Alibaba has on it.

China has over 618 million internet users and they're spending lots of money. That's twice the population of the United States, but only half China's total population. So there's lots of room for growth in a sector that's already exploding. In 2010, China's e-commerce market was $74 billion dollars. In 2013, it was $295 billion. By 2017, it's estimated to reach $713 billion.

And Alibaba is cashing in big time. It controls 80 percent of online sales. Even though it's not yet putting up the gross revenue numbers of Amazon and Apple, its 80 percent control of the market and 80 percent profit take from its revenue adds up to a huge, massive, crazy, growing amount of money.

Apple put on a big show this week. But Alibaba is the story to follow.