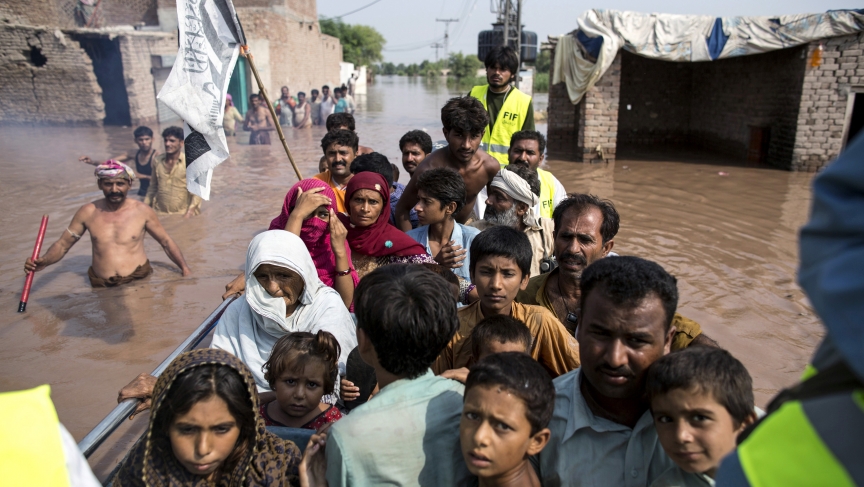 Punjabi flood victims are evacuated by boat from their flooded house following heavy rain in Jhang, Pakistan, on September 10, 2014.
Credit:

Torrential monsoon rains have hit Pakistan's Punjab province, causing the area's five rivers to spill over their banks and flood more than 1,000 villages across Punjab, Azad Jammu and Kashmir provinces.

This year's flood is said to be the worst in the past five decades. The death toll in Pakistan alone is reported to be more than 240 people, and thousands more were forced from their homes. Indeed, most eyewitnesses say they have never encountered a catastrophe on this scale.

The damage was severe enough to spark a rare gesture of friendship between Pakistan and India, which has also been hit by flooding. Indian Prime Minister Narendra Modi offered Pakistani Prime Minister Nawaz Sharif assistance with relief operations in Pakistan-occupied Kashmir.

Already swimming in political turmoil, the Pakistani government was quick to begin rescue efforts for those displaced and stranded in Kashmir, parts of Khyber Pakhtunkhwa province and in Punjab.

The government has taken criticism for its response, but citizen-led efforts remain popular. Ordinary Pakistani citizens have been at the forefront of relief efforts, donating and organizing aid through several charities. Bloggers, Twitter users and citizen journalists in Pakistan have used the hashtag #PakistanFloods to call for help, promote the need for donations and rescue workers, and also to report news from the scene of the disaster.

Other Pakistani Internet users captured powerful images of the flooding, like this Facebook video from the city of Sialkot

Night War, a Pakistani Twitter user, posted pictures of half-submerged buildings in Wazirabad, one of the hardest-hit areas in Pakistan:

Ahmed, another citizen journalist, claims that the current crisis is the result of “criminal negligence” more than any natural disaster:

But others like Fatima Ali say that the government's rescure efforts have done some good:

The #PakistanFloods hashtag was powerful enough that, early this week, Javed Malik, the prime minister's special envoy, used it to announce the launch of a campaign to aid flood victims:

In the meantime, the danger from flooding is still present. The provincial government of Punjab and the local disaster relief office launched an online “Flood Relief Dashboard” to monitor relief efforts, as well as share high-resolution, real-time satellite images of the region's flooded areas. Authorities have also established a control room with dedicated phone lines to coordinate rescue and relief operations.

Faisal Kapadia, a Global Voices author from Pakistan, has worried on Twitter that the situation could become worse. Indeed, floodwaters continue to make their way downstream, toward Jhang and the Sindh province.

The coming monsoon rains.. seem like a tough period for us here in Pakistan...shudder to think what can happen

This story by Ammar Faheem was originally published on our partners Global Voices Online, a community of bloggers from around the world.