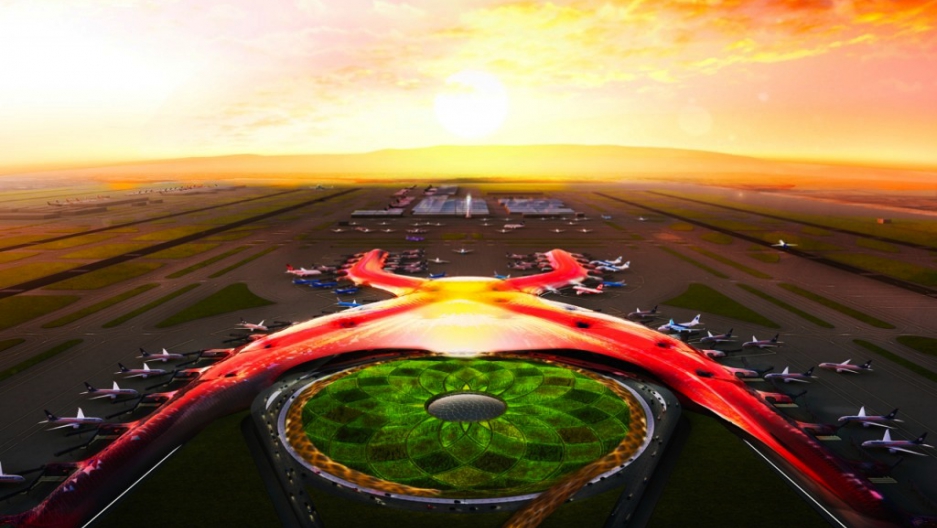 MEXICO CITY — Mexican dictator Porfirio Diaz rebuilt the center of this mountain capital in Parisian style, complete with a fine arts museum. Former President Carlos Salinas sliced through surrounding highlands with a road to Acapulco known as “Freeway of the Sun.” Ex-Mayor Andres Manuel Lopez Obrador built a second deck on its circular road so commuters could ride high above the gridlocked streets.

Mexico’s rulers have long bestowed major personal and political backing to massive public constructions, known here as “obras faraonicas” or “pharaonic works.” As well as winning them popularity points, the megaprojects leave an imprint on the landscape, guaranteeing their lasting legacy.

President Enrique Peña Nieto appears on course to join the club with one of the biggest projects yet — a colossal, six-runway airport in a space-age design, with curving glass walls in a vast x-shape.

To complete this mammoth he’s hired none other than Lord Norman Foster, the avant-garde British architect who reshaped London with such buildings as the famous (or infamous) Gherkin. Also working on the $9 billion development is Fernando Romero, son-in-law of Mexican telecom tycoon Carlos Slim, who vies with Bill Gates for the title of world’s richest man.

“For its magnitude, design and social benefit, the new airport will be a transcendental work, an emblem of a modern Mexico,” Peña Nieto said, presenting the plans alongside Foster last week.

If it all works out, the airport could boost Mexico’s building sector, bring in billions more tourist dollars, and leave Peña Nieto’s fingerprints on the city for decades to come. But such humongous designs could trigger enormous problems, from protests to financing fusses to construction concerns.

Valdez points to certain public works that have come back to haunt their political patrons.

The penultimate Mexico City mayor, Marcelo Ebrard, built a large extension to the subway system in 2012 he called the “Golden Line,” only to have it shut down this spring because the curves were too tight and the rails didn’t fit the trains.

Salinas’ “Freeway of the Sun” also came under scrutiny last year when segments of it crumbled under torrential rain.

Experts say building contracts for the airport construction — to be funded with public and private money — will need close monitoring.

“We have a saying here,” Valdez added, “‘Cuando hay obra, hay sobra.’” That means, “When there’s construction, there’s extra money.” In other words: Watch out for backhanders and embezzlers.

Mexican industry continues to suffer from bribery, with subsidiaries of US companies including Wal-Mart and Hewlett-Packard recently being accused of greasing contracts here.

Protests could also be a thorn in the side of the megaproject, which will be built on the eastern outskirts of the Mexico City urban sprawl. Hundreds of farmers marched during a protest against the construction of a new airport Nov. 28, 2001 in Mexico City. (Susana Gonzalez/Getty Images)

Former President Vicente Fox himself tried to build a new airport in a nearby site during his 2000-2006 term, but butted against small-holder farmers who refused to sell their land. After machete-wielding protesters blocked roads and captured police officers, Fox capitulated.

Peña Nieto claims he has already secured land for his airport. However, on Monday a group of marching protesters claimed they had ongoing legal claims to some of the property.

Others have complained the airport site will encroach on the Texcoco Lake nature reserve.

“It’s a flood zone so it’s not ideal to build an airport there,” opposition Sen. Alejandro Encinas said in a statement, claiming it would put various local birds and other species in danger of extinction.

However, Peña Nieto, who brought the Institutional Revolutionary Party (PRI) back to power, has proved more effective than many of his predecessors in pushing through reforms.

In August, he signed the biggest changes in Mexico’s energy laws in decades, allowing foreign companies to participate in the country’s valuable oil and gas sectors. He’s also overhauled education laws despite blockades and marches from unionized teachers.

More from GlobalPost: Fracking near the Texas border has northern Mexico trembling

But while these makeovers have won him praise from world leaders including President Barack Obama, Peña Nieto’s popularity at home has been mediocre. Since he took office in December 2012, the share of Mexicans who give him thumbs up has gone down slowly but steadily, to 46 percent in the latest survey by pollster Parametria.

“This approval rating doesn’t look so bad if you compare it to leaders in some European countries such as France. But it is not good by Mexican standards, as presidents here normally get the approval of over 50 percent,” Parametria director Francisco Abundis says.

However, he believes that perceived success may depend more on how much employment it creates rather than how many planes land. Only about 10 percent of Mexicans actually take commercial flights, whether for business or holidays.

The president has promised the airport project will create 160,000 direct jobs, and he hopes it will spur growth.

So far in his administration, Mexico’s economic growth has been sluggish, expanding 1.1 percent in 2013 and 1.7 percent in the first half of this year.

“Peña Nieto is desperate to give his popularity a boost,” political analyst Valdez says. “Like all politicians, Peña Nieto wants to be loved. And after almost two years in office, he is not loved.”