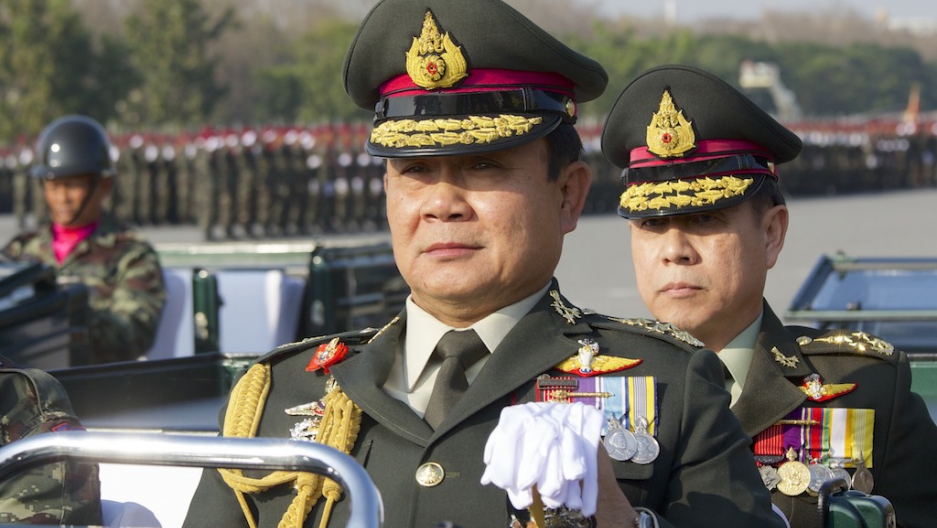 BANGKOK, Thailand — As a boy, he was handsome and always picked up litter off the street. Today, he is a tireless public servant, collecting a pittance of $12.50 per day as he leads a nation of millions.

He takes no holidays. He takes no guff. He recently tried his hand at songwriting and, on his first-ever attempt, penned an instant radio hit.

Nope. This is Prayuth Chan-ocha, the new supreme leader of Thailand — according to fawning media portrayals and his own public sermons.

Prayuth is a 60-year-old army chief with a bulldog expression. Ever since he seized power in May, a largely servile Thai media has praised him in absurdly glowing tones. One newspaper even declared that, as a child, he was the “best looking boy in the class.”

Failure to kowtow is risky. Under martial law, criticizing Prayuth is punishable by detention.

Following Thailand’s shift, there is no longer a nation left on Southeast Asia’s mainland (which includes Myanmar, Laos, Cambodia and Vietnam) where citizens get to freely choose their leaders. Every single one of the region’s ruling political parties first came to power either through communist revolution or army coup.

In a twist of fate, Myanmar, until recently regarded as a despotic backwater, has the best shot of breaking out of the authoritarian club. Its elections are slated for next year.

Meanwhile, Thailand is controlled by a handpicked 32-person council largely composed of generals. Many are former classmates. Only two are women.

All are loyal to Prayuth.

Prayuth insists he was forced to overthrow Thailand’s democratic system because it had descended into chaos. One of his fellow junta chieftains, Lt. Gen. Chatchalerm Chalermsukh, insists their putsch saved Thailand from “turning into Libya or Syria.”

Those hyper-conservative protesters were, in fact, agitating for an overthrow. They created the chaos needed to justify the takeover, the 12th successful coup since Thailand ended direct rule by kings in the 1930s. The protesters' stated goal is the same as Prayuth’s: creating “true democracy” through authoritarian rule, a confounding notion that is popular among the Thai urban elite.

But Prayuth isn’t satisfied with overhauling the political order. He is also fixated on restoring Thailand to an imagined era when virtue and order ruled the day.

That’s the theme of his song “Return Happiness to Thailand,” released shortly after the coup. It’s now played incessantly on Thailand’s largest radio and TV networks, which the military just happens to own. “We’ll do as we promised,” goes the chorus. “We just need a little more time. Then our beautiful land will return once more.”

He’s concerned about littering: “Whenever I drive around and see garbage, I’ll stop my car, collect the litter and find a place to toss it.”

And kids these days: “They don’t have enough time for housework.”

And retail therapy: “People get in a bad mood and say, ‘Let’s go shopping.’ Well, you can’t repair your happiness by going shopping ... it’s dangerous!”

And sleazy tourists: “Foreigners shouldn’t think they can come to Thailand and do illegal things like you see portrayed in movies.”

Much of Prayuth’s rhetoric offers an overly simple narrative that pits the good people against the bad people, who are criminally minded and corrupt. He’s launched a wave of crackdowns on low-level miscreants: beach town mafiosos, teen motorbike gangs and even jaywalkers.

But he’s yet to focus on the military, an institution that has managed to jack up its funding to $6 billion in the past 10 years. After the coup, it upped its budget another 5 percent.

The Thai military’s budget is now roughly equal to the entire GDP of Kosovo. As in Egypt, its top officers comprise a business elite. Many of its generals sit on the boards of profitable Thai corporations, which benefit from their protection. Yet, under martial law, they cannot be properly scrutinized.

Thais can only guess at the wealth of their new military rulers. An “anti-corruption” agency that reports to the junta has stated the generals are not required to divulge how rich they are. Prayuth — who claims to only collect a $12.50 per diem — has not yet disclosed his assets.

“I want everyone’s trust,” Prayuth said in a speech last week. “So if still you’re suspicious of me, I want you to go back and listen to my song.”