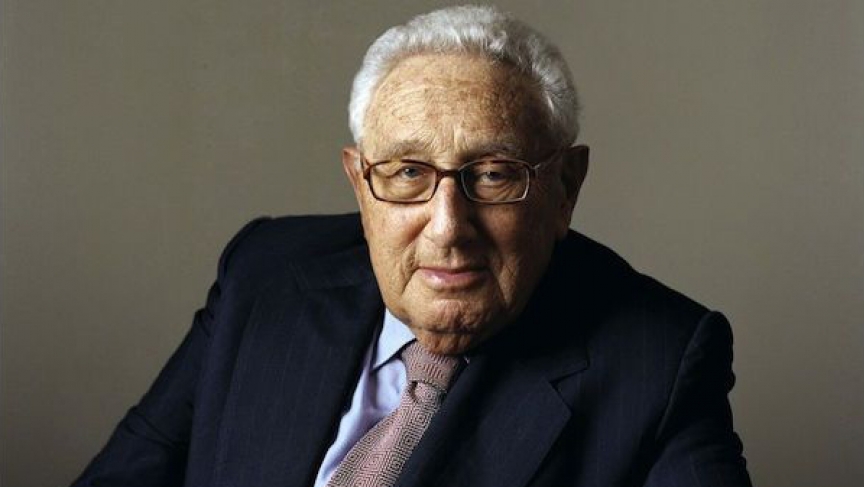 Former Secretary of State Henry Kissinger sees parallels between current conflicts and those of his time.
Credit:

Over the last century, America's understanding of its place in the world has changed dramatically. In the 1920s and 1930s, after millions died in World War I, the United States declined to join the League of Nations and focused on domestic challenges rather than on the rise of fascism in Europe.

For Henry Kissinger, America's inward turn had a personal impact. The former secretary of state and his family suffered persecution as Jews in Nazi Germany, eventually fleeing their homeland for the US in 1938, just before the formal outbreak of World War II.

Since he began his career in foreign policy, Kissinger has been known as a realist, advocating the rational pursuit of American goals above all. But in his latest book, "World Order," Kissinger tempers his foreign policy outlook with a dose of idealism, a belief in America's moral vision.

In a conversation with The Takeaway's Todd Zwillich, Kissinger argues the United States must take the lead in the face of ISIS, adding that Saudi Arabia now finds itself in an “extremely difficult” position.

“[Saudi Arabia] is overwhelmingly afraid of the rise of Shia power in the region,” he says. “But it is also threatened by Sunni fanaticism, which threatens its entire structure domestically. They will have to decide — and I think they will decide — that they will have to back the war against ISIS. But then, we will face a second round of issues when Iran becomes dominant.”

When examining the Middle East, Kissinger sees great instability — he points out that internal revolutions are being carried out in almost every nation in the region, and the conflict between Sunnis and Shias rages on.

“And then there is an attack on the international system that was created in 1920 at the end of World War I — where the borders do not reflect anything except a sphere of influence between Britain and France of that period,” says Kissinger. “It has many similarities to the European’s Thirty Years’ War from 400 years ago.”

The Thirty Years’ War was settled with the Treaty of Westphalia, which made a number of territorial changes across Europe and introduced a new set of principles for peace that effectively governed the region for three centuries.

“Is it possible to create the equivalent of such a system [in the Middle East]?” asks Kissinger. “That is the challenge for the United States, and for others — we alone can’t do it. The world without a balance of power is an arbitrary world. The nature of the balance of power will change, but the principle that you cannot have one region or one country dominate the whole world will re-emerge — or should re-emerge.”

Parallels in the Middle East with his own history

Kissinger was at the forefront of balancing competing interests for many years as secretary of state and national security adviser — including during the 1973 Chilean coup that ousted the nation’s democratically elected leader, Salvador Allende, and paved the way for Augusto Pinochet. Many contend Kissinger helped to orchestrate the coup.

“The fact is, I did not engineer a coup against Allende,” Kissinger said. “Allende was overthrown by his military, with whom we had no contact with three years earlier when he came in.”

In early 2000, the CIA admitted it was “aware of and agreed with Chilean officers’ assessment that that the abduction of General René Schneider, the Chilean Army’s Commander in September 1970, was an essential step in any coup plan.”

The CIA supported the general’s kidnapping because Scheider refused to use the Chilean Army to prevent the nation’s elected officials from confirming the election of Allende, a socialist, as president. The kidnapping ultimately failed, but Gen. Schneider was shot and died two days later — the day Allende’s election was confirmed.

“It was not an operation that we initiated, it was not planned as an assassination, and we turned it off,” Kissinger says. “But that happened three years [before the coup]. It was not in connection with this.”

“We have been trying to overthrow [Syrian] President Assad,” he says. “In this administration, we supported and took military action in Libya for that purpose — America has an interest in bringing about democratic governments. It’s a well-established fact. What the details were in 1971, with all due respect to you, is not an appropriate subject here.”

On March 18, 1969, when Kissinger was serving the Nixon Administration, American B-52s began carpet-bombing eastern Cambodia. It eventually evolved into a four-year bombing campaign that dragged the nation of Cambodia into the Vietnam War. In all, the United States dropped more than half a million tons of bombs, killing anywhere from 150,000 to 500,000 civilians.

“Four Vietnamese divisions had occupied a strip of territory in Cambodia,” Kissinger says. “These divisions entered Vietnam at will and were killing Americans. They launched an offensive against the Americans in Vietnam before we even knew the way to the bathroom in the White House. We had 400 to 600 casualties in the first eight weeks. What would your listeners have done — would they have bombed these areas or not?”

Kissinger still contends that the areas in Cambodia that the US bombed was “largely uninhabited.”

“The bombing that people are talking about, that are criticizing the White House [for] was a 10 mile strip in which very few people were killed, if any,” he says. “I don’t know whether the numbers are correct, I’m sure there were not hundreds of thousands, but there were civilian casualties as a result of the ground operations caused by the North Vietnamese invasion of Cambodia.”

Some have accused Kissinger of being a war criminal, but unsurprisingly he disagrees.

“[Those accusations are] brought up by a tiny minority — there’s a vast majority that has a very different view,” he says. “I think the time has come, if we want to bring America together in the crisis that we face, that we leave plenty of good faith with people we disagree with, and maybe we can still trust in their practical judgment.”