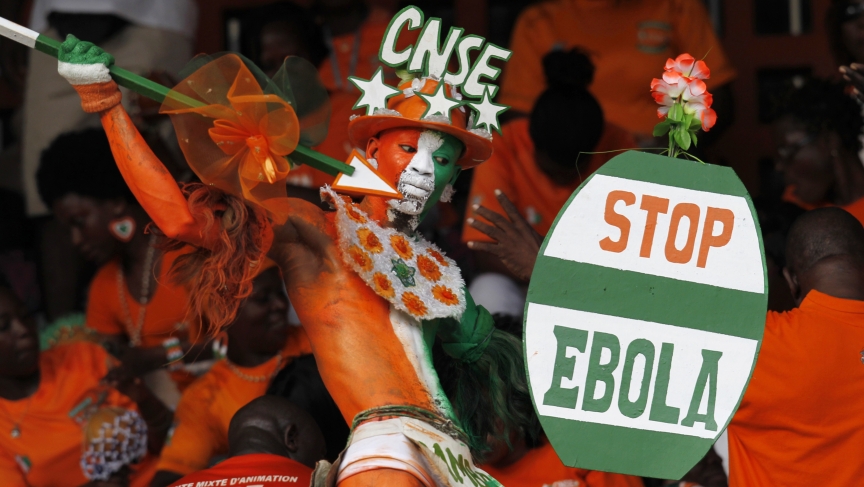 A fan of Ivory coast holds a sign with a message against Ebola during the 2015 African Nations Cup qualifying soccer match between Ivory Coast and Sierra Leone.
Credit:

Liberians seeking treatment for Ebola rarely show up at a health care facility in an ambulance. Instead, many are carried in by friends or relatives. Or they arrive in taxis, or sometimes even in the trunk of a car.

That's according to health workers with Doctors without Borders in the capital Monrovia, where the depth of the Ebola crisis is only now becoming clear.

Officials with the World Health Organization are warning that  the virus is spreading exponentially in Liberia and thousands of new cases are expected in the next three weeks.

Liberia's Information Minister Lewis Brown says even when patients with Ebola symptoms manage to get to treatment facilities, many are being turned away at the gates because of a lack of beds.

"The situation in our country is grave," Brown says. "We're overwhelmed and beyond our resource capacity to be able to respond. The population is stricken with fear and panic."

Brown says the bed shortage is in part due to the success of public education campaigns that have taught Liberians to recognize Ebola symptoms and report to facilities.

"We've been able to spread the word about the success rate — that is if you came in early, you can be helped to walk out healthy," he notes. "What it now means is the world, given this unprecedented outbreak, must similarly in an unprecedented way respond to our need and provide us the kind of help and support we need."

Brown says Liberians need at least 1000 beds for Ebola patients in and around Monrovia, far more than the 240 beds available now.

Taxis are thought to be points of transmission in the Liberian capital because residents with Ebola symptoms are criss-crossing town in cabs, searching in vain for an unoccupied hospital bed.

Asked if Liberia might take up a suggestion from the World Health Organization to ban taxis, Brown says, "We cannot rule out any option — that's the first thing we've been able to learn in this fight. But what we would prefer to do is to provide more ambulances. Our people are left to scramble for taxis because there are not enough ambulances reaching out to pick them up when they call for help."

Brown says the virus is having an impact on all segments of society in Liberia. But those hit hardest, he says, are care givers.

"In homes, mothers and daughters and sisters — those who are responsible to provide care for the families — are the ones who are under the most severe attack from this virus," Brown says. "This is an attack on our way of life because we are a people who love to care for each other during periods of affliction."