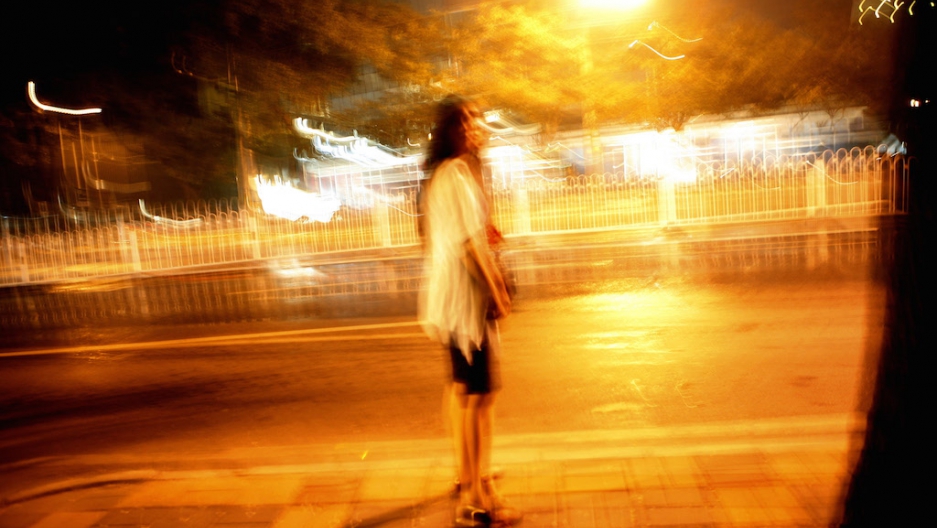 BEIJING, China — “When I saw you were a girl on her own, I almost didn’t stop,” the driver of an illegal cab explained to a young woman standing in one of Beijing’s torrential autumn downpours.

“Do you know what I’m talking about?”

She did: the case of a 22-year-old known as Jin, which has struck a nerve with millions of women who’ve struggled to find their way home using any of China’s unregulated taxi-style services.

In a rush to get to a nearby rail station, Jin took a ride from a 52-year-old rickshaw driver named Dai.

Thanks to a lucky phone call, police eventually rescued her alive. Jin was discovered in Dai’s lodgings above a cab firm. The arresting officer said she was “unresponsive … with broken bones and bruises. … A heartbreaking sight.”

Motorbikes, pedi-cycles and unmarked vehicles loiter outside every bus or train station, any of which could now conceivably be driven by someone who might kidnap, beat, rape or imprison their passenger — as Dai allegedly did to Jin in late August.

Crimes more brutal and shocking as this may happen every day in China, but most go unreported due to press restrictions. Jinan police in this case chose the opposite method, using the media to help launch a propaganda campaign, warning women to beware the omnipresent unlicensed cabs that patrol at night, identified by a red light glowing in the dark.

The story became a nationwide topic recently — hence the Beijing driver’s anxiousness — as friends shared warnings on social-message systems. Wuhan police even saw fit to offer "anti-rape" advice that included such suggestions as sharpening one’s nails and vomiting on potential attackers, concluding that the safest method of defense is to “be ugly.”

Jin’s assault was just one of several such gruesome incidents that have dominated mainland headlines recently. Another involved 19-year-old Gao Qiuxi, a female student who set off to catch a train from Suzhou to Nanjing early one August evening, and then disappeared.

Her family launched a campaign to find her on Weibo, China’s version of Twitter. Thousands forwarded the post — until Chen Shiqu, director of the Ministry of Public Security’s Anti-Trafficking (of Women and Children) Office, announced that “the girl was robbed and killed” and “the suspect [an apparent mugger, 19, called Wang] had been captured.”

In addition to the outrage, these cases have prompted introspection.

“On morality, this is perhaps the darkest period for China,” commented author Yu Geng. “The whole world is entering civilization, while only our nation's spirit is digressing into the Stone Age. … This is a riotous era, take care!”

The assaults have occurred amid outbreaks of senseless murder that no one seems able to prevent, however depressingly familiar they’ve become.

In late August, a Henan man was sentenced to death for murdering eight neighbors in “a dispute over the positioning of a mirror,” state media reported. The savagery of the crime — Li Lingtao, 41, dispatched his victims, including three children, using an iron bar, an axe and a cleaver — was almost overshadowed by its absurdity. Li was convinced the positioning of his neighbor’s mirror was a deliberate attempt to mess with his feng shui (whether Li was given any psychological evaluation is not known).

Days later, the autumn term got off to a deadly start when a man stabbed four children to death, injured several others, then committed suicide. He was reportedly angry with the school for not registering his daughter. The attack recalled a similar knife-rampage in Hubei in May that left eight students injured, as well as a deadly spate of school killings in 2010. In fact, such attacks have occurred on an annual basis since 2004.

Statistically, China remains a low-crime country, as the US State Department acknowledged in a 2013 report. In 2012, a police newspaper dubiously claimed Chinese murder rates had fallen below those of Switzerland and Japan. And while the UN Office on Drugs and Crime agreed that America’s murder rate was five times higher than China's in 2009, the state’s statistics often mask which crimes, and how many victims, are included in the data.

Still, from the ubiquitous window bars and apartments whose doors resemble jail cells, to the cities’ omnipresent security guards, to the high-walled compounds of the rich, something is amiss from the official picture: China is an extremely “low trust” society.

Although the streets seem safe from rapists in the shadows, petty crime — from bicycle thefts to scams to counterfeit money and goods — are a part of everyday life. More worryingly, sudden outbreaks of extreme violence have become a fixture of Chinese news. Although the media contrives to paint them as isolated incidents of inexplicable “revenge,” usually against society, a failed relationship or job, there’s a growing sense that these incidents demonstrate the systemic failure to provide effective outlets for legitimate grievances.

Cases such as that of Yang Jia, 28, who became an internet hero after storming a Shanghai police station and killing six cops, or the Hunan divorcee who shot dead three judges over a property dispute, have spurred much sympathy but few solutions. As China University of Political Science’s Pi Yijun told the Wall Street Journal, there’s rage seething below the surface. “The accepted mindset,” he said, “seems, ‘fists are more powerful than reason.’”

It seems only when extreme incidents affect people in a singular way — the everyday fears of a woman using public transport, for example — that society feels empowered to assist where the state still lacks enforcement.