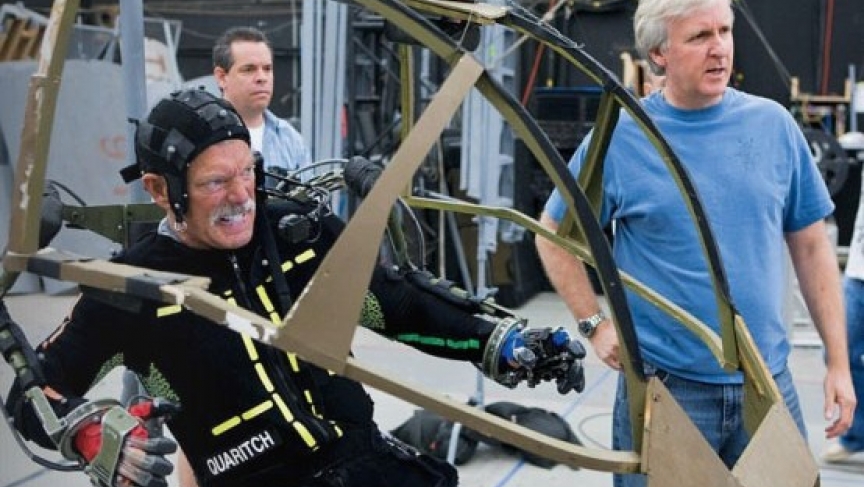 Actor Stephen Lang performing in an "amp suit," with director James Cameron by his side
Credit:

As digital effects in movies become more and more lifelike, the line between actors and computer animators is getting blurry.

In the science fiction blockbuster, Avatar, actor Stephen Lang shot all of the movie's climactic scene from inside a 16-foot mechanized skeleton called an amp suit. Using a technique called motion capture, computer animators recorded Lang’s physical performance and used his movements to create the action of the character.

The face audiences see in the amp suit isn't technically Lang's: It's a digital double of Lang created by scientist and CGI wizard Paul Debevec, chief visual officer at USC's Institute for Creative Technologies. So whose acting are we looking at when we watch the final product?

“I basically look at creating a role like this as a collaboration between a lot of people,” says Lang, whose other roles include Thomas "Stonewall" Jackson in Gods and Generals. “I take a certain amount of credit for it, but you've got to give credit where credit is due, to the animators as well.”

Debevec says it’s important to remember that “every good performance by a digital actor has been good because there was a real performance by a real human actor who has created that character ... and it has been used to faithfully drive the digital character.”

And we're still “decades away” from the artificial intelligence break-throughs that would allow animators to replicate what a live actor can do, Debevec thinks. “And why would you bother with that?” he asks. “Actors are really good at this.”

Even so, improvements in digital effects are increasingly dictating the choice between using live actor or the actor’s digital double. Debevec says it's sometimes just easier to create a double and plug it into all the other digital effects than to try to integrate a live actor into the shot.

“In that scene from Avatar, everything in that shot is done with computer graphics," Debevec explains. "If they had taken video of Stephen and tried to paste it in, the lighting wouldn't have matched, the forces on his body would have been very difficult to match.”

But as with all technology, it’s not always that simple — or succesful. Rendering a lifelike human face or body is still the most difficult task facing computer animators. The human brain is wired to recognize even the smallest deviations in real “human” behavior. If the animators get it wrong to the smallest degree, the reaction of a viewer can quickly turn to a sense of revulsion and dread.

“We've had a few digital characters in movies that have done very well,” Debevec says. “The longest screen time we've seen of a fully digital actor was the elderly version of Brad Pitt in The Curious Case of Benjamin Button, work done by Digital Domain.” Other attempts, like creating a young Jeff Bridges in the movie Tron: Legacy, weren’t quite as successul.

“So, I’d say maybe we've made a few trips across the uncanny valley, but we haven't set up camp over there yet, and occasionally people get lost along the way,” Debevec says.

From the actor’s standpoint, Stephen Lang says, the trend is both fun and a bit troubling.

“Actors work hard in these films,” he says. “I know it's become a big issue. Should motion capture actors be recognized for their work? We just have to look at the work that Zoe Saldana does in Avatar, or that Andy Serkis does in Planet of the Apes, or as Gollum in Lord of the Rings, to know that those are great performances.”

Lang believes there is no real “philosophical fear” that actors as human flesh and bone are going to disappear. “It's an old profession,” Lang says. “We've been around since the beginning and I think we'll be there at the end.”