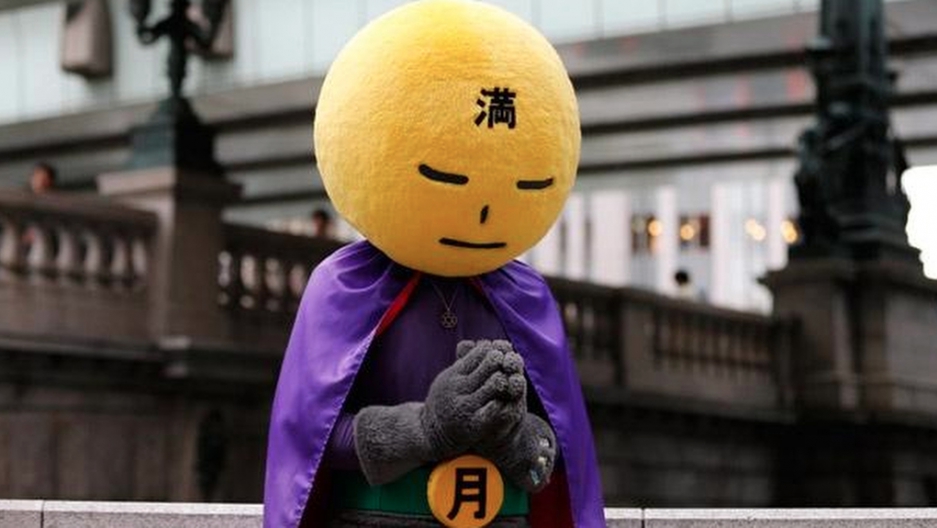 Mangetsu-man, which translates as Mr Full Moon, is on a one-man crusade to clean up the streets of Tokyo.
Share

Mangetsu-man, which translates as Mr Full Moon, is on a one-man crusade to clean up the streets of the Japanese capital. But his enemy is grime rather than crime. And in a city voted as having the cleanest streets in the world, he needs all the super powers he can muster to make things cleaner than they already are.

Armed with a broom and dustpan, Mangetsu-man has been patroling the streets of Tokyo since last year in a tireless search for rubbish. But his mission is much larger than just picking up cigarette butts. Mangetsu-man hopes that by cleaning the streets he can also "clean up all the negativity in the world." Quite a goal.

Like any self-respecting superhero, Mangetsu-man goes to great lengths to keep his true identity secret. He even uses a voice dictation app to conceal his voice.

Dressed in a yellow “full moon” head, purple bodysuit, and what appear to be oversized grey UGG boots with matching gloves, Mangetsu-man has attracted lots of attention, which is saying something in a city like Tokyo, where dressing up in outlandish costumes is common.

Tonight, we honor Mangetsu-Man for it is the night of the full moon. We LOVE U, Mangetsu-Man pic.twitter.com/zg3vWsuejP

His good deeds have inspired a small army of volunteers.

That's chicken next to an airfreshner, if you are wondering. Don't ask questions. So far Mangetsu-man has concentrated most of his cleaning powers on the iconic Nihonbashi bridge, which was Japan’s most famous bridge until an ugly expressway was built over it just before the 1964 Olympic Games.

Now he and other locals are petitioning the government to remove the expressway and restore the bridge’s iconic status before Tokyo hosts the 2020 Olympic Games.

This will be Mangetsu-man's biggest challenge yet, and it could be his greatest triumph.